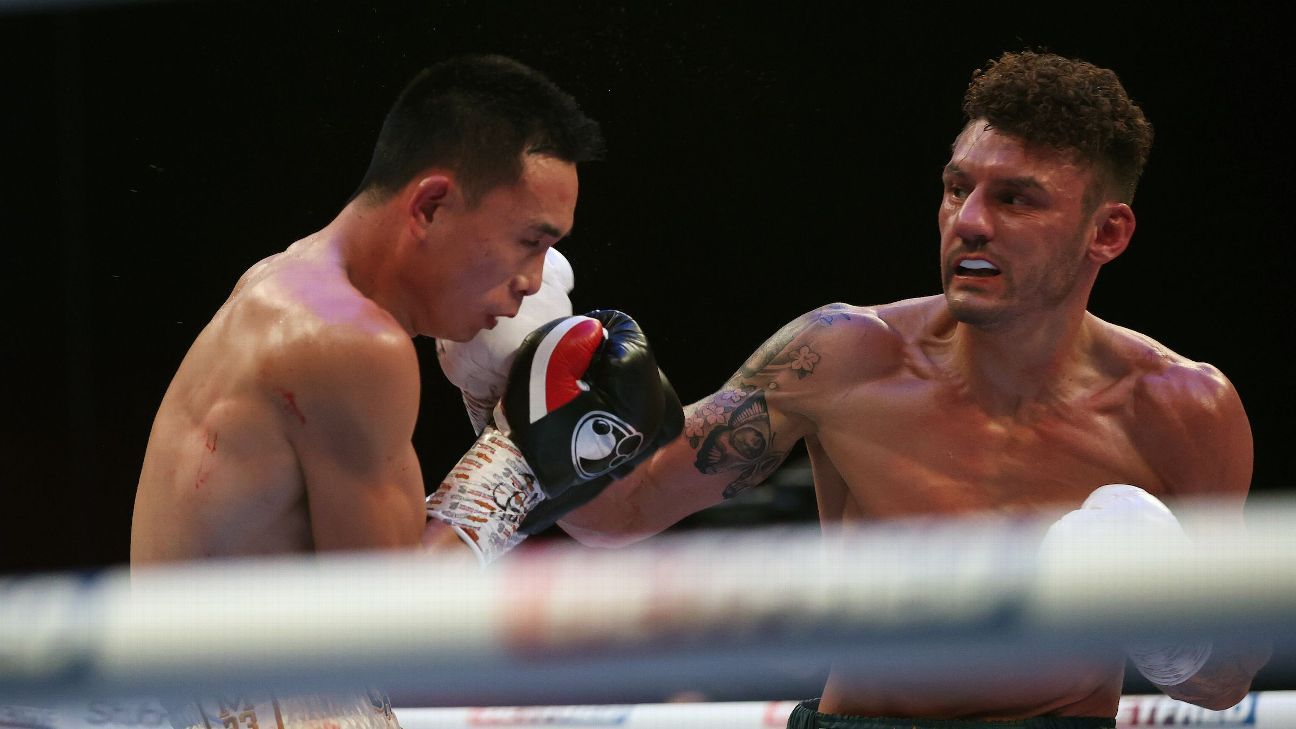 Leigh Wood capitalized on a sluggish performance from Xu Can to pull off the upset and win the WBA “regular” featherweight title by TKO in the 12th round Saturday in Essex, England.

Brilliant from start to finish, Wood floored Can with a right hook in the 12th. After taking a count, Can never recovered and was stopped on his feet by referee Marcus McDonnell as Wood piled on punches.

Can (18-3, 3 KOs), who entered as ESPN’s No. 3-rated featherweight, was expected to overwhelm Wood with his volume of punches. But, according to CompuBox stats, Can threw just 75 punches per round after averaging 107 per round in his previous six fights.

The Chinese boxer seemed to suffer from ring rust coming off a 20-month layoff and lacked his usual punch output. Wood, meanwhile, was razor sharp and picked his punches perfectly in his first world title fight.

Wood, who turns 33 on Sunday, rose to the challenge despite fighting on six weeks’ notice.

“I really want to test myself against other top fighters now,” Wood said. “I’m 33 in an hour. It was about keeping my discipline and not getting carried away.”

Can was making his third title defense and fought for the first time since November 2019, when he unanimously outpointed Manny Robles III.

After being kept out of the ring for so long due to the coronavirus pandemic, Can started slowly and his head was jolted back by an uppercut in the second round.

Can, 27, from Beijing but who trains in Miami, was busier from the third round when he began to outpunch Wood, but the English boxer continued to have success with single power shots on the counter.

Wood landed more uppercuts in the fourth and fifth rounds, as he continued to find holes in Can’s defense.

Wood, who won the British title in his previous fight in February, outworked Can in the eighth and the Chinese boxer never settled into his usual high-tempo rhythm of volume punching.

Wood switched stances in the last two rounds, frustrating Can. When Wood landed a short right to the jaw in the last round, a weary Can dropped to the canvas. Wood followed up to force the stoppage at 2 minutes, 43 seconds of the 12th round.

Wood’s win brings another surprising change to the featherweight landscape. Can was supposed to be fighting Wood’s fellow English boxer Josh Warrington this year, but Warrington was stopped in a shocking defeat to Mexican Mauricio Lara earlier this year.

Warrington faces Lara in a rematch on Sept. 4. Kid Galahad and Jazza Dickens, both from England, will fight for the vacant IBF world featherweight title on Aug. 7.

• On the undercard, Anthony Fowler (15-1, 12 KOs) set up a big fight with rival Liverpool super welterweight Liam Smith on Oct. 9 with an eighth-round stoppage win over Germany’s Rico Mueller.

Fowler, 30, dominated Mueller, and it was the perfect confidence booster ahead of what will be the biggest fight of his career against Smith in Liverpool.

• Chris Billam-Smith captured the European and Commonwealth cruiserweight titles, as well as the vacant British crown, in a split-decision win over Tommy McCarthy.

“I will be surprised if he wants a rematch, but if he does I’m up for it,” Billam-Smith said.

McCarthy looked dangerous from the start, and Billam-Smith (13-1, 10 KOs), 30, from Bournemouth in England, did well to absorb a big right in the first round.

The early rounds were close, but Billam-Smith landed a succession of hooks in the fifth round. McCarthy took more punishment when he found himself trapped on the ropes and caught by a right cross in a round that belonged to Billam-Smith.

McCarthy finished the sixth better, but suffered a bad cut above the right eye from a clash of heads. It was a close, grueling fight, and both fighters appear to be a ways off from a world title shot.