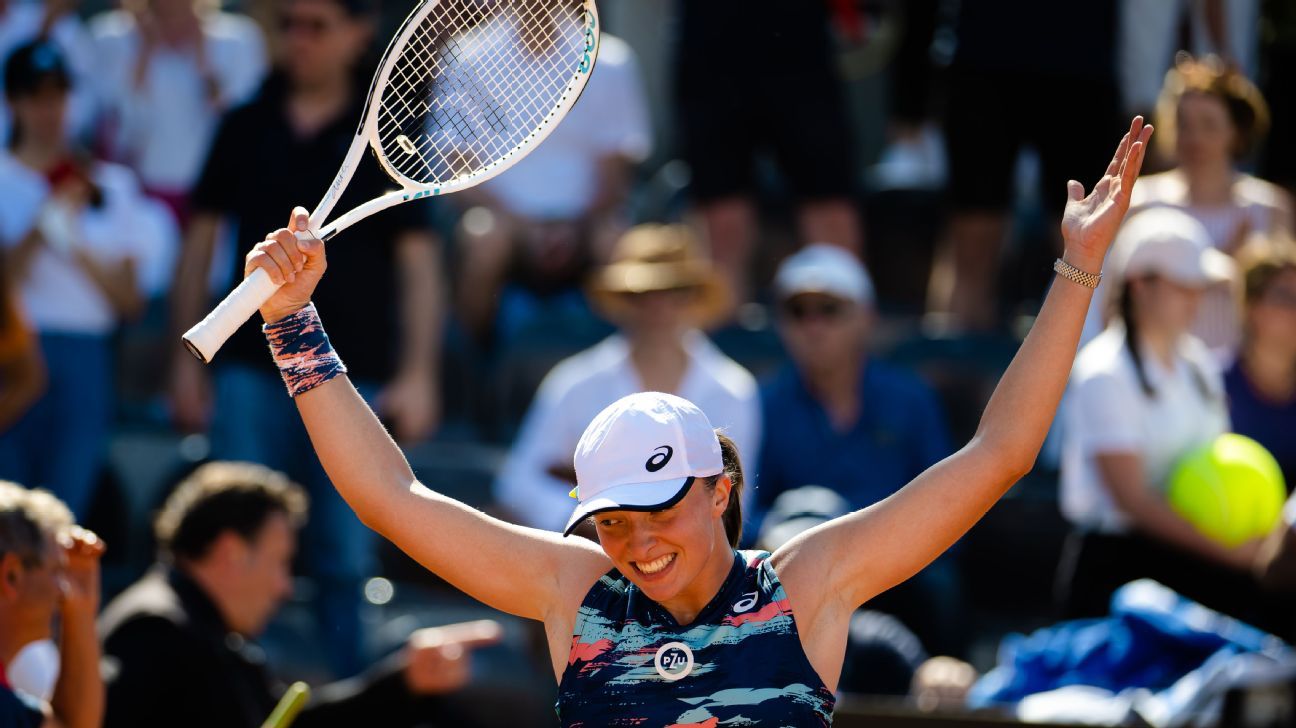 ROME — If there were any lingering questions about who is the new dominant force in women’s tennis, Iga Swiatek put that to rest with a 7-6 (2), 6-0 victory over 2019 US Open champion Bianca Andreescu on Friday to reach the Italian Open semifinals and extend her winning streak to 26 matches.

The sport was shocked when Ash Barty announced her sudden and immediate retirement while holding the No. 1 ranking two months ago. Add in that Serena Williams hasn’t played in nearly a year, and there were plenty of questions about who might step up as the new woman to beat.

Well, since February, nobody has beaten Swiatek, who assumed the No. 1 spot by default when Barty removed herself from the rankings.

Considering her prowess on hard courts, the often-injured Andreescu has been tossed around as a potential No. 1. But Swiatek slowly wore Andreescu down in a lengthy first set as she dictated the tiebreaker by moving her opponent from side to side.

In all, Swiatek produced 27 winners to Andreescu’s 12 and converted all six of her break points.

Swiatek’s semifinal opponent will be third-seeded Aryna Sabalenka, who rallied past Amanda Anisimova 4-6, 6-3, 6-2 for her first victory over the American in five tries.

It’s the third consecutive Masters semifinal on clay for Tsitsipas, who defended his Monte Carlo Masters title last month and then was beaten by Alexander Zverev in the Madrid Open semifinals last weekend.

Tsitsipas will face Zverev again in the Rome semifinals after the 2017 champion beat Cristian Garin 7-5, 6-2.

Swiatek is attempting to win her fifth straight tournament and defend her title in Rome.

The most recent player to win more consecutive matches was Williams, who had a streak of 27 in a row in 2014 and 2015.

Swiatek’s run makes her a favorite to win a second French Open title when the year’s second Grand Slam gets underway in nine days. When Swiatek won at Roland Garros in 2020, she was ranked No. 54 — making her the lowest-ranked woman to win the Paris major in the Open era.

Swiatek’s recent success has also given her a comfortable 2,000-point lead in the rankings over No. 2 Barbora Krejcikova, who is out injured.

Tsitsipas kept his cool with nearly the entire crowd of 10,500 fans supporting Sinner, the Italian competitor who is ranked 13th and considered a future Grand Slam contender.

Sinner dropped to 0-12 in his career against opponents ranked in the top five.

Sinner was treated by a physical trainer between the first and second sets and appeared hampered physically as the match wore on.

There was an interruption of more than 10 minutes when Tsitsipas held his second match point because a spectator fell ill near the top of the stadium. But Tsitsipas won the point when play resumed by running down a drop shot and responding with a forehand winner up the line.