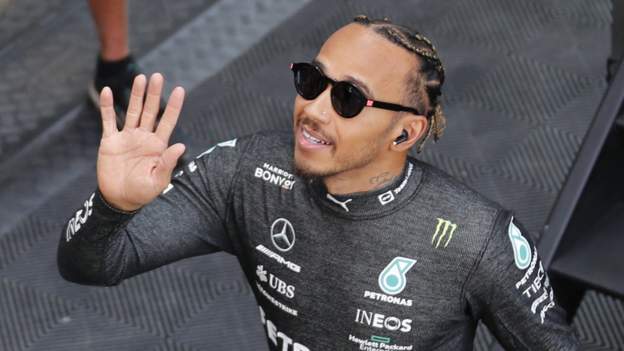 Lewis Hamilton says his recovery to finish fifth in the Spanish Grand Prix feels “better than a win”.

The seven-time champion impressively fought back from a puncture on the first lap which saw him drop to 19th.

With team-mate George Russell finishing third it marked an improved weekend for Mercedes, who have struggled with their car in the opening five races.

“To have that problem and come back it felt like some of the older races I’ve done,” Hamilton said.

Hamilton collided with Haas’ Kevin Magnussen on the opening lap in Barcelona and when he rejoined at the back of the field after his enforced pit stop he despondently suggested retiring the car to preserve the engine, such was the gap to the leaders.

But he responded with a fine drive and was on course to finish fourth until he had to slow down in the closing laps because of a coolant leak, which allowed Ferrari’s Carlos Sainz to retake a position Hamilton had taken shortly beforehand.

“I was thinking it was impossible to get back into points but the team said no you’re on for eighth,” Hamilton said. “I thought they were being super-optimistic.

“I’m glad we didn’t [retire] and it just shows you never stop and never give up and that’s what I did.

“A race like that is like a win, and it actually feels better than a win most often when you have come from so far back.”

Red Bull’s Max Verstappen won the grand prix with team-mate Sergio Perez second ahead of Russell after Ferrari’s Charles Leclerc retired from the lead with an engine problem.

An upgrade to the Mercedes car in Spain featured a redesigned floor which seems to have eliminated the most significant problem the the car has had so far – a high-speed bouncing created by aerodynamic disruption on the straights, known as ‘porpoising’.

In the opening five races Mercedes only had two podium finishes – Hamilton in the season opener in Bahrain and Russell in Australia three weeks later – with Hamilton often cutting a frustrated figure.

“We have made a lot of improvements with the car and the race pace is much better, the car is much nicer in the race, we have some improvements to make in qualifying,” Hamilton said.

“If I hadn’t had that [issue at the start], I would have been fighting with the Red Bulls.”

“Him showing this very good pace was important for not only his morale but also our morale,” Wolff said.

“Who would have thought he would climb all the way to fourth before the problem and that looked like a World Championship-winning race car he was driving.

“That would have not been possible in the previous races, it reminded me of last year and the year before when the car and driver is really on the top of its game.”