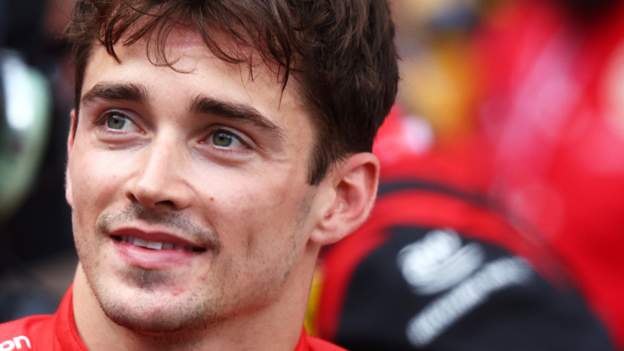 Charles Leclerc took pole position for his home race after a chaotic end to qualifying at the Monaco Grand Prix.

Leclerc was on an even quicker lap at the end before Red Bull’s Sergio Perez crashed at Portier, was collected by Sainz and the session was stopped.

Perez took third ahead of team-mate Max Verstappen, Leclerc’s title rival off the pace in fourth.

Fernando Alonso also crashed his Alpine at the end of the session, at Mirabeau, and slipped to seventh behind McLaren’s Lando Norris and Mercedes’ George Russell, both of whom the veteran Spaniard had headed after the first runs.

And Perez’s crash prevented Hamilton getting a lap on new tyres in the final part of qualifying and he ended up only eighth, ahead of Aston Martin’s Sebastian Vettel and Alpine’s Esteban Ocon, both also hindered by the red flag.

Leclerc started the weekend as favourite and has looked the most likely man to take pole, and he looked like he might be about to do one of the all-time great Monaco qualifying laps before the maelstrom at the end of the session.

Already a quarter of a second clear of the field after his first lap, his second one threatened to move him into another dimension but he was unable to complete it.

Leclerc: “It is very special. I am so incredibly happy. It has been a very smooth weekend until now. I knew the pace was in the car and I just had to do the job, it went perfect.

There were ironic parallels with last season in the way the session ended.

In 2021, Leclerc also took pole – a position that was secured when he himself crashed, this time at the exit of the Swimming Pool section.

In the end, it ruined his weekend. Putting the car back together, Ferrari did not notice that the left-hand driveshaft his was cracked and the car broke down as he tried to make his way to the grid before the start of the race.

Leclerc has always been blisteringly fast at Monaco, but has never finished a race on his home track. With Sainz alongside him at the start, he has a golden opportunity to make amends for that – a result he badly needs having seen a 46-point lead turned into a six-point deficit to Verstappen in the last three races.

Perez had looked the man most likely to threaten Leclerc before the final part of qualifying but his first lap in the last session did not go as well as he had hoped and Sainz snuck ahead.

Trying to make amends, Perez pushed too hard at Portier, the right-hander before the straight into the tunnel, and crashed into the barriers, where he was collected by Sainz, who was on his own final lap and trying to improve behind him.

Although Leclerc was improving further ahead around the lap, the driver most badly affected by Perez’s error was Verstappen.

Out of sorts throughout qualifying, he had just put in his best first sector. It was not a match for Leclerc, but the world champion looked as if he might have a chance to jump onto the front row, only to be thwarted by the session being stopped. 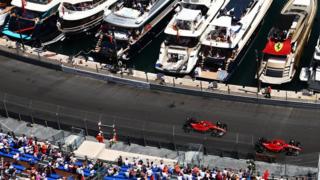 Norris supreme but Hamilton loses out

The red flag benefitted Norris and Russell, particularly. Just before it, Norris had produced a stupendous lap to go fifth, just 0.248secs slower than Verstappen, while Russell leapt up to sixth, 0.263secs behind his fellow Briton.

Both of them slipped ahead of Alonso, who had been impressive himself in going fifth on his first run.

But Hamilton, Vettel and Ocon had all not yet run new tyres until the final run, and all lost out as a result.

Rain is expected to fall later in the afternoon, accompanied by thunderstorms, so the track will be in a different condition even if it is dry for the race, which is far from certain.