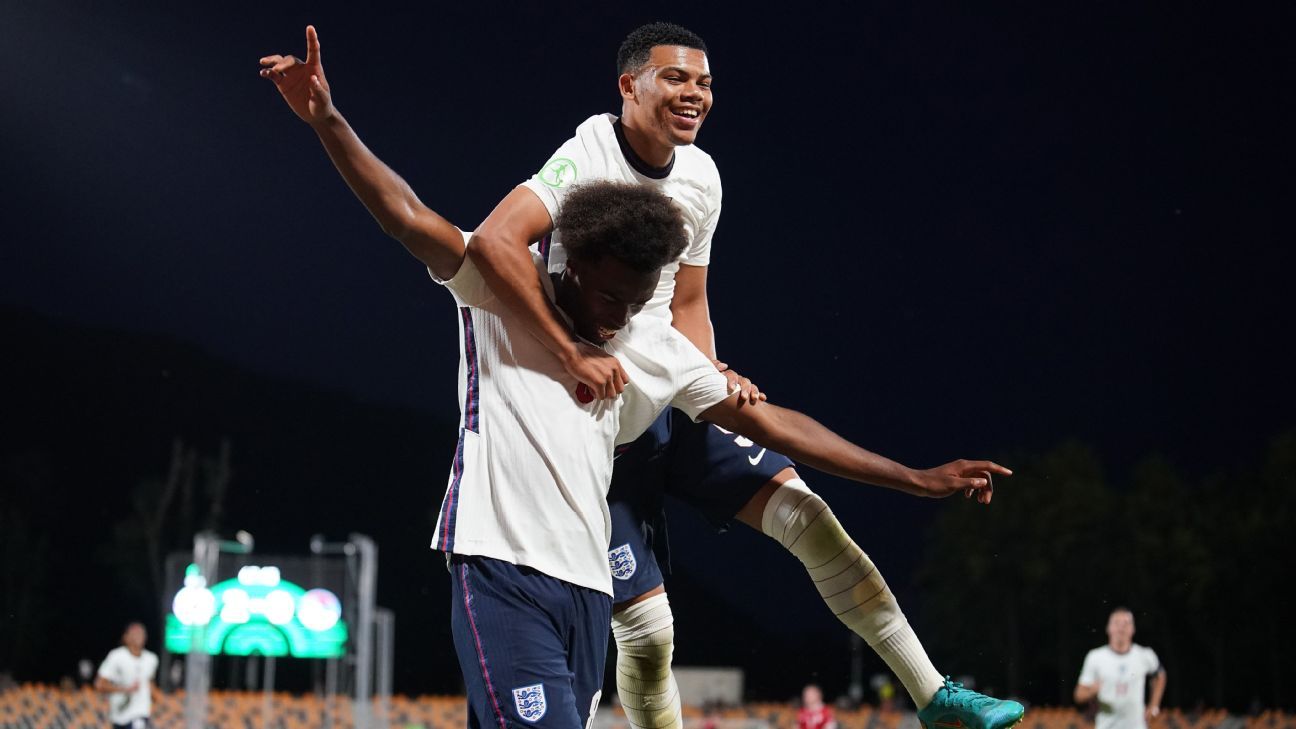 The eight-team Under-19 European Championship is into the knockout rounds, with France taking on Israel and England facing Italy in the semifinals on Tuesday.

But which players have stood out during the group stage? And who has made a name for themselves? Our resident scout Tor-Kristian Karlsen takes a look at some of the best young talent from the tournament in Slovakia.

Having already made a mark as a high-scoring forward in the Rennes academy and then as an occasional impact substitute for the first team, the Chad-born winger was outstanding — along with his fellow two forwards Alan Virginius and Ange-Yoan Bonny — in the 5-0 win against Slovakia. With his direct running, dribbling and ability to beat an opponent, the left-footed winger scored a goal and set up two as France cruised to a big opening victory. Courtesy of his first-class off-the-ball running, the energetic 19-year-old also added a goal against Romania and two in the win over Italy to finish the group stage with five from three games. A top prospect who could be months away from a proper Ligue 1 breakthrough.

One of the most talked-about players ahead of the tournament, the giant defender has faced little trouble in the group stage. With his 6-foot-7 frame, the 19-year-old cuts a bit of an odd figure for a centre-back, yet despite his massive size, he has fine command of his body, is reasonably agile and — perhaps even more surprisingly — is both composed in possession (left-footed) and able to advance with the ball into midfield. While Toure — who ended the season as a regular at Ligue 2 side Le Havre — tends to deal with whatever comes his way in the air, he’s also combative and a good tackler. He is now being tracked by multiple top clubs in Europe.

Though Demir’s brief career at Barcelona didn’t pan out — he featured in nine competitive games for the Catalans before his loan was cancelled and he returned to Rapid Vienna in January — the left-footed playmaker has made a mark for Austria throughout the tournament, despite the team not functioning particularly well. Occasionally left to carry too much responsibility on his young shoulders, Demir has still showcased his exquisite turns, creativity, brilliant close control and clever football brain, particularly when playing neat triangles and combinations in the last third. He also showed a great deal of personality as he kept grafting against a totally dominant England side in the 2-0 defeat.

Gloukh was already on the radar of many scouts, having impressed at club level and stood out in the qualifying rounds of the Euros, but few expected that the Israeli would make such an impact. A mature, intelligent and technically brilliant attacking midfielder — part No. 8, part No. 10, or creative winger — he has won many admirers with his performances and talk of a €10m move this summer is gathering pace. Hard to dispossess when running at opponents, Gloukh is a brilliant dribbler, who always seems to pick up the ball in the most favourable positions and is able to slide teammates through with perfectly weighted passes. His exquisite touch to set up the 2-1 goal against Austria was nothing short of sublime and he has been unplayable at times, with an intuition and flair in the final third rarely seen from one so young.

Heavily tipped to be one of the star performers prior to the tournament, the Aston Villa midfielder — who featured in 12 Premier League games last season — has not let down those early predictions. Chukwuemeka has been in astounding form and has occasionally made it appear as if he has surpassed the level of U19 level football now (as illustrated by the confident manner in which he took his goal against Serbia.) Not only is the box-to-box midfielder athletic, with the energy to venture up and down the pitch for the duration of the game, but he’s also so elegant, smooth on the ball and technically adept to go with it.

One scout present at the tournament told me: “It’s difficult to think of a more ideal No. 8 for the modern game; he attacks, he creates, he defends. His mentality is clearly top notch too. He’s destined to become a top player.”

One of the key members of England’s U19 side during qualification, the Spurs striker has reproduced his form from the earlier rounds in Slovakia. The spearhead of the attack for an impressive England generation — though his teammate Alfie Devine and Chelsea‘s Harvey Vale also deserve a mention — Scarlett caught the eye with two opportunistic goals in the 4-0 win against Serbia. He’s more than just goals, though, as he has been a constant thorn in the side of the opposition due to his relentless movement and smart, razor-sharp runs in behind the defence. Furthermore, despite playing only a handful of games for the Tottenham first team, Scarlett has demonstrated that he’s a centre-forward who continues to work on his game and his development potential is high. Indeed, his Premier League breakthrough may be imminent.

A dynamic No. 8 who has been a mainstay in the Italy side throughout the whole U19 campaign. While not being the most spectacular of prospects, Casadei is extremely efficient in what he does: He presses with conviction, wins the ball through excellent positioning and covers vast areas in midfield. In possession, he’s efficient and practical, avoids unnecessary touches, and focuses on letting the game flow. Casadei is also positive in his passing, always looks for attacking options, and is able to break the defensive lines with swift and accurate passes, or by making progressive runs into space. The physically imposing midfielder also features neat close control and controls the ball well in tight areas.

Born in Germany, Motika is now representing Serbia after he appeared for his birth nation at U16 level. Having impressed in the Bayern Munich youth team, after leaving Hertha Berlin in 2017, he was snapped up by Red Star Belgrade for €3m in January, though the German giants have an option to re-sign him. Often playing from the left-side, Motika likes to run at opponents with impressive speed and quick feet, before cutting in and unleashing vicious shots — there’s even a touch of Arjen Robben about his game. He’s also been working on his physique to compete on the more physical side of the game. — David Cartlidge