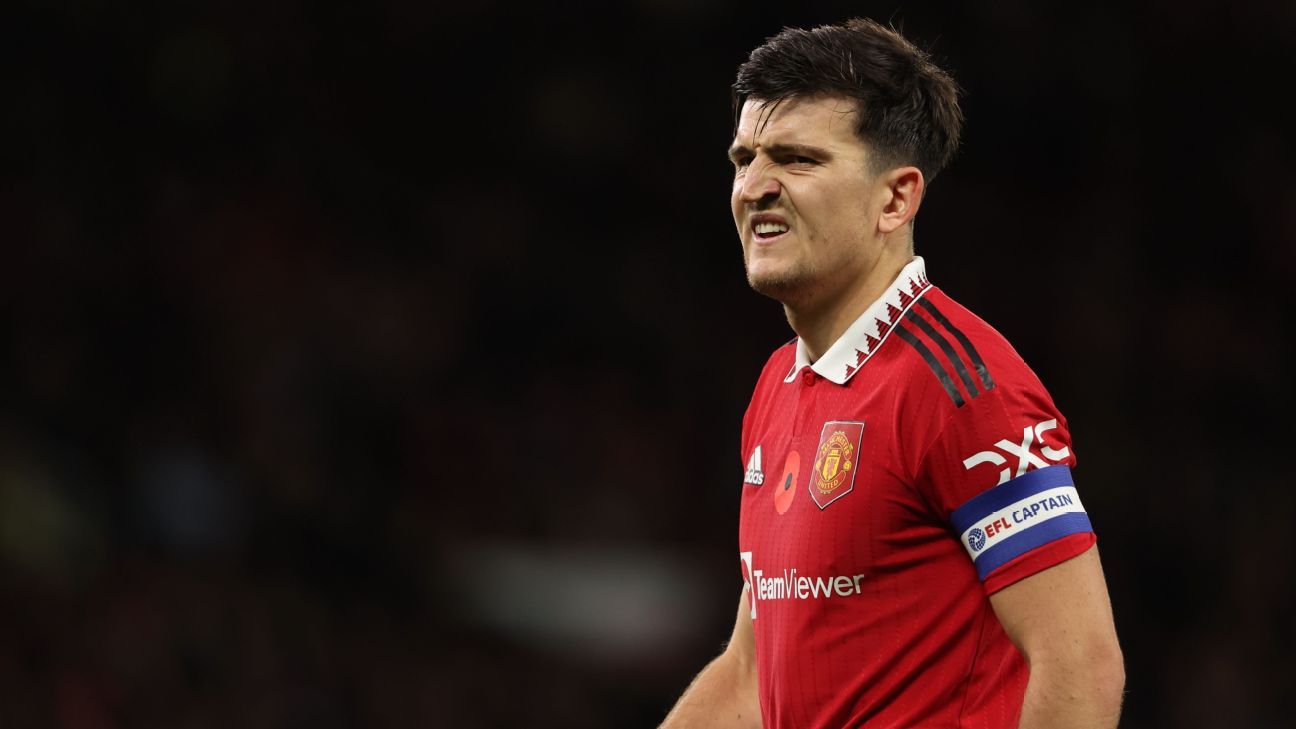 The summer transfer window is closed for the major leagues in Europe. However, with an eye on January, there’s plenty of gossip swirling about who’s moving where. Transfer Talk brings you all the latest buzz on rumours, comings, goings and, of course, done deals!

Erik ten Hag is set to offload Harry Maguire in the summer to help fund his overhaul of the Manchester United squad, according to the Guardian.

The Red Devils will consider transfer offers for their club captain, but will have to accept a considerable loss on the world-record £80 million it took to sign him from Leicester City.

While Maguire could start for England at the World Cup, he lags behind Raphael Varane, Lisandro Martinez and Victor Lindelof in United’s centre-back pecking order.

Ten Hag admires Maguire’s professionalism but ultimately feels that the 29-year-old’s sluggish pace is a problem. The club would use the funds from Maguire’s transfer to bring in more competition for United’s defence.

In addition, Ten Hag is preparing to let Fred, who is going to the World Cup with Brazil, leave as a free agent when his contract ends in the summer. There is a clause in the midfielder’s deal that allows the Red Devils to extend his contract for another year, but that is not expected to be taken up.

19.38 GMT: Newcastle United are ready to part ways with Matt Ritchie, according to Football Insider.

The 33-year-old winger is in his seventh season at the club, and almost left during the last summer transfer window.

Ritchie has only made two appearances this season for the Magpies, and Eddie Howe has given the green light for him to leave.

18.47 GMT: Inter Milan have set their eyes on Valencia defender Jesus Vazquez, according to La Gazzetta dello Sport. The 19-year-old has struggled for minutes under head coach Gennaro Gattuso and will look for a move in January.

Inter are ready bring Vazquez in on loan with an option to buy.

17.15 GMT: Brighton are tracking Benfica’s Goncalo Ramos, according to Record in Portugal.

Ramos is a 21-year-old forward who has scored 26 goals in 79 appearances for Benfica — 12 of those this season. He has also been prolific for Portugal, netting 14 goals in 18 caps.

He has also been linked with moves to Manchester United and Newcastle United, but Brighton are the first club to show their hand.

However, Record reports that the Seagulls might not be prepared to match the £35m Benfica have told clubs they want to part with the player.

16.22 GMT: Josip Stanisic has signed a contract extension with Bayern Munich, keeping him at the Allianz Arena until the summer of 2026.

The 22-year-old, part of the Croatia squad at the World Cup which starts next weekend, joined Bayern on a professional contract in 2017 after playing youth football for 1860 Munich and SC Furstenfeldbruck.

He was promoted to the Bayern first team last year, and has since made 29 appearances in all competitions. He has been rewarded for his performances with a new deal.

“Josip Stanisic has established himself in our senior squad over the past two years, and that’s also credit to our youth academy because Josip was trained by us at the Campus,” board member Hasan Salihamidzic said. “He’s versatile in where he can play, performs well when needed.

“His reliability helps our coach and the team. I’m happy we can plan further with him for the long term.”

Drameh, 20, joined Leeds from Fulham two years ago but has made just seven appearances for the club in all competitions. He impressed on loan at Cardiff City in the second half of last season, being named their young player and player of the season despite only being there for four months, but has been unable to make his mark after returning to Elland Road.

The England under-21 full-back is seen as a player with huge potential and he could look to move on for more opportunities.

14.33 GMT: Atletico Madrid are considering allowing Matheus Cunha to leave in the winter transfer window, according to Marca.

Cunha, who joined Atletico in the summer of 2021 from Hertha Berlin, is enduring a difficult season. The Brazilian forward has failed to score in 16 appearances and has been left out of Brazil’s World Cup squad.

Manchester United showed an interest in signing Cunha in August but both Atletico and the player were not interested. Cunha is under contract until June 2026 and the Rojiblancos are reportedly now open to letting the player leave for the right offer.

13.37 GMT: Argentine midfielder Mateo Tanlongo is on the verge of joining Sporting CP as a free agent after his deal with Rosario Central expires in December, according to Record.

Tanlongo, 19, is expected to join the Portuguese giants in January and sign a long-term contract. An Argentina under-20 international, Tanlongo has made 29 appearances for Rosario Central this season, including 20 in the top division.

12.40 GMT: Lazio midfielder Sergej Milinkovic-Savic is Juventus’ top priority for 2023, according to Calciomercato.

The Turin giants have already spoken with the player’s agent, Mateja Kezman, earlier this week. Juve know it will be difficult to land Milinkovic-Savic in January but are hopeful he can arrive to Turin next summer.

Milinkovic-Savic, 27, has scored five goals and set up seven more in 19 appearances across all competitions for Lazio this season. He is under contract with the Biancoceleste until June 2024 but Lazio have offered a contract extension. Lazio will only negotiate Milinkovic-Savic’s departure for transfer offers in the region of €100m.

Felix, 23, is out of favour at Atletico and is weighing up his options, scoring three goals in 17 appearances for the Rojiblancos this season though he has been included in Portugal’s World Cup squad.

“Of the strikers we have, Joao Felix is one of the footballers that has more goals, besides the fact he has scored three,” Simeone said. “He can score. I hope he can continue to be with us, that he can perform at the level he has shown us and that he continues generating. We need him.”

Also reported target of Manchester United, Felix is under contract with Atletico until June 2026. Atletico paid Benfica a club record €126m to sign Felix in the summer of 2019.

10.52 GMT: Arsenal could make signing in the January transfer window as they look to sustain their surprise Premier League title bid.

Coach Mikel Arteta said in his prematch press conference that he would be assessing which players become available once the winter window opens.

“It’s so unpredictable this window particularly with a World Cup in middle,” Arteta told a news conference ahead of Saturday’s game at Wolves. “We will have a look, we will try to get the squad stronger and as well be active because you don’t know what’s going to happen in that World Cup. Touch wood everyone will be okay.”

On Friday, Calciomercato reported that Arsenal have already made an offer to Shakhtar for the winger and they remain favourites for his signature.

Mudryk has attracted plenty of attention this season after scoring three goals in the Champions League for Shakhtar. The 21-year-old is also a reported target for Juventus.

Newcastle are said to be prepared to make a transfer offer of upwards of £50m for Mudryk.

09.00 GMT: Paris Saint-Germain have made a €45 million transfer offer for Palmeiras teenager Endrick, but the Brazilian team swiftly dismissed the proposal for the 16-year-old forward on Friday, sources told ESPN Brazil.

In a meeting with the player’s agents, the Ligue 1 champions said they were willing to extend the negotiations and meet the player’s release clause of €60m, sources said.

PSG have been in contact with Endrick’s family for some time and have enlisted their Brazilian forward Neymar to reach out to him. The French giants are confident of getting a deal over the line, sources added.

Chelsea are another team that have been following Endrick’s development and showed interest in matching the €60m price for the Brazilian wonderkid.

Sources have told ESPN that Chelsea have hosted the player and his family at the club’s training ground, with the Blues’ Brazilian defender Thiago Silva invited to meet his compatriot and convince him to move to London.

– Inter Milan will move to sign Villarreal‘s Alfonso Pedraza if Robin Gosens leaves in January, according to Calciomercato, although there are other names the Serie A club is looking at. The German has been widely linked with a move away due to a lack of game time and could head to Bayer Leverkusen.

– AC Milan‘s negotiations to renew the contracts of Ismael Bennacer and Rafael Leao are both stagnating, according to Gazzetta dello Sport. Both of their deals come to an end in 2024, with Leao’s situation likely to be impacted by the World Cup, while Bennacer’s agent is taking the time to look at his options.

– Bayern Munich goalkeeper Alexander Nubel, who is on loan at AS Monaco, will either leave Bayern on another loan or permanently in the summer of 2023, according to Florian Plettenberg. Backup keeper Sven Ulreich signed a contract extension that will keep him with Bayern until 2024.