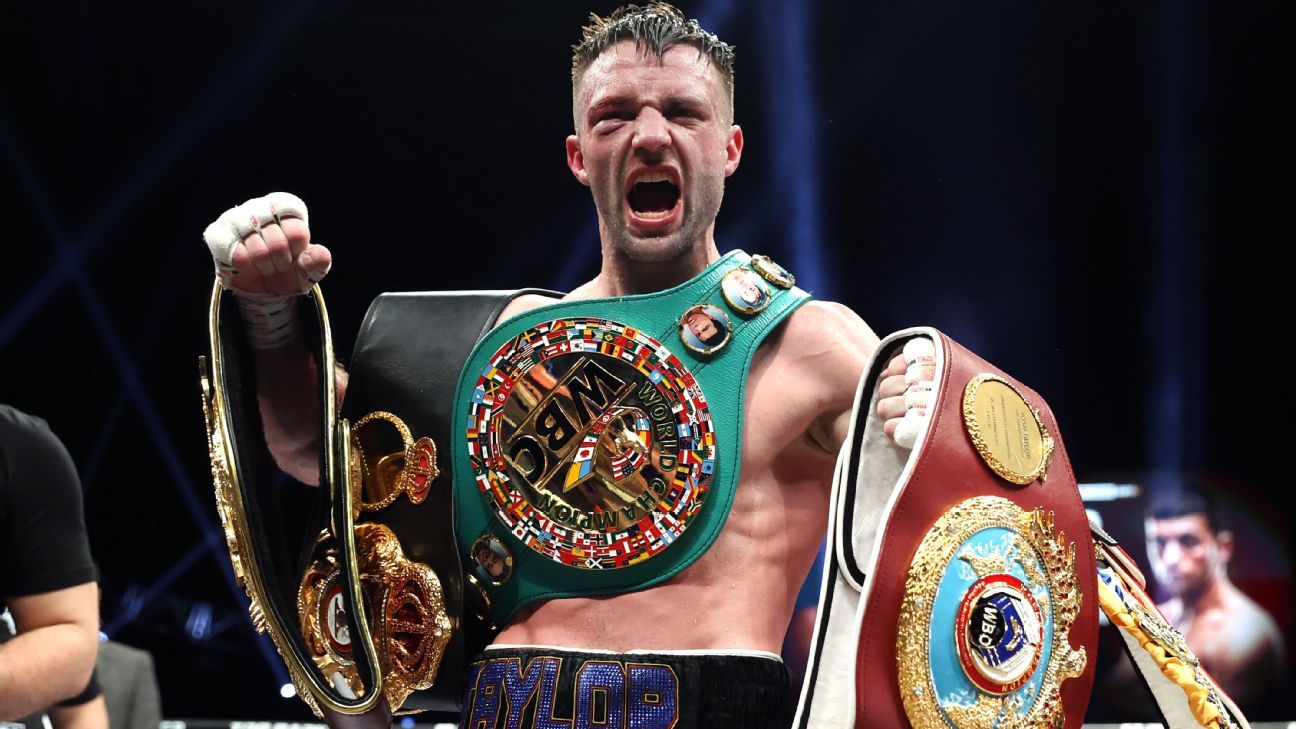 The plantar fascia connects the heel bone to the toes to create the arch of the foot. The severity of the tear was undisclosed, which makes a timeline for recovery difficult to predict.

When Taylor (19-0, 13 KOs) fought Catterall last February in Scotland, where he’s a star, he escaped with a split-decision victory to retain his undisputed 140-pound championship (WBC, WBA, IBF and WBO titles). But even that fight had been postponed from its original December 2021 date after Taylor suffered a knee injury.

Controversy swirled afterward as Catterall (26-1, 13 KOs) griped about the unpopular decision and lobbied for the return bout. He was even elevated to No. 1 in ESPN’s junior welterweight rankings (Taylor was dropped to No. 2).

The rematch was eyed for late November, but talks to finalize the bout stalled. After the sides struck a deal, the rematch was set to take place Feb. 4 but was postponed following a scheduling decision made by Sky Sports, the network that was set to televise the pay-per-view event in the U.K. (ESPN+ was slated to stream it stateside).

Chris Eubank Jr. meets Liam Smith on Sky Sports pay-per-view Saturday, and network executives didn’t want another such event so soon afterward. Despite the controversy, Catterall, who is from England, agreed to travel to the champion’s backyard once again.

“Today I should have been waking up with all of the belts,” Catterall said on Instagram the day after the fight with Taylor. “Boxing, shame on you. … Dreams stolen.”

Taylor, 32, entered the ring undisputed champion with all four junior welterweight titles but vacated three of them to avoid mandatory obligations with various No. 1 contenders that would have preempted a rematch with Catterall.

Taylor had planned to move up to 147 pounds afterward but reversed course after a public outcry over the judging. He said he even received death threats. Catterall was a decided underdog ahead of his first fight with Taylor, but impressed with clean punching, an ability to avoid the champion’s power shots and a sound jab. He dropped the champion in Round 8 — the first knockdown of Taylor’s career — and the consensus was that he appeared to do enough to win a close fight.

“It wasn’t my best performance, and I’ve put a lot of pressure on myself being heavy favorite and boxing back at home … but once I started catching him, I believe I got the win 100 percent,” Taylor said afterward. “I know I won the fight; overall I scored the bigger shots and the more meaningful shots. He put up a good fight, but he never won the fight. Second half of the fight I took control.”

Taylor recently parted ways with his trainer, Ben Davison, in favor of Joe McNally, who also trains former champion Smith. Taylor won his first title in May 2019 with a decision victory over Ivan Baranchyk. Five months later, Taylor added a second belt with a tight-decision win over Regis Prograis. In May 2021, Taylor captured the undisputed championship with a decision win over Jose Ramirez.

Catterall, 29, was competing at the elite level for the first time.

ESPN injury expert Stephania Bell, a physical therapist, said plantar fascia injuries such as Taylor’s can be extremely painful and aren’t typically repaired with surgery. Partial tears can often be more problematic than complete ruptures in terms of both prolonging the pain and limiting function. Pain management and proper rest while allowing the inflammation to subside will dictate when Taylor can fully resume training.