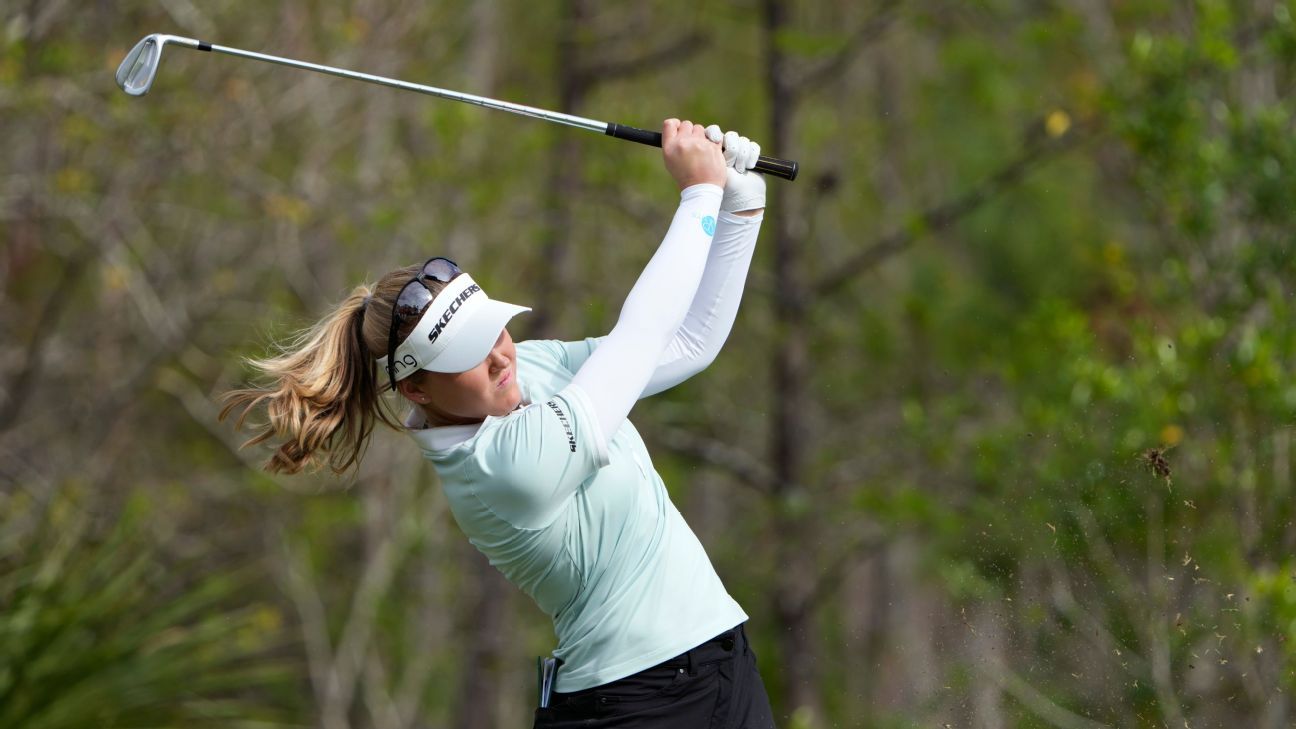 ORLANDO, Fla. — Brooke Henderson went from complete control of her game for two days to having to scratch out a good score Saturday. The result was a 3-under 69 and a 3-shot lead in the Hilton Grand Vacations Tournament of Champions.

Henderson was up for the fight and moved to 14-under 202 in the LPGA Tour season opener at Lake Nona. The Canadian will take a 3-shot lead over Nelly Korda (68) and Nasa Hataoka of Japan (66) into the final round.

After a pedestrian stretch of golf early on her second nine that included a bogey at the par-4 12th — only her second bogey of the week — Henderson managed to slide in a 30-foot curler for birdie from the left side of the 16th green.

It was a huge bonus, returning a small dose of momentum after her game had surprisingly stalled after 2½ rounds of red-hot play.

Henderson missed a short birdie putt at the 14th hole — a par-4 where the tee was pushed up to only 229 yards — and failed to get up and down for birdie at the reachable par-5 15th, where her approach shot tugged left of the water-guarded green but at least had the good fortune to stay up. She didn’t make the most of the break, settling for par. Then came the unexpected slider on 16, which provided a nice, and needed, lift.

“That putt on 16 was a huge help,” said Henderson, who is chasing her 13th LPGA victory. Last season she won twice, including her second major, the Evian Championship in France, but ended the year struggling with a bad back. “It wasn’t quite as smooth today, but big putts like that in big moments definitely help.”

Henderson started the day with a 4-shot advantage and stretched the lead to 5 by the time she made the turn. Then came the bogey at 12, and with Hataoka and Korda closing fast over the final holes, the tournament was back on again.

Henderson was up for the challenge, embracing it, in fact. Having ended 2022 slowed by injury that required rest and rehab, and carrying 14 new clubs in the bag to start 2023, she is right where she wants to be for the first Sunday of the season.

“It’s just so much fun to be in contention and in the final groups on the weekend and right in the mix,” Henderson said. “That’s the best feeling that there is.”

Hataoka, a six-time winner on tour, was the hottest player on the course, making birdies on seven of her final 10 holes, posting a back-nine 30 and signing for a 66 that left her in position to try to chase down Henderson on Sunday.

“Yeah, I was dialed in,” Hataoka said. She said when she made a birdie at the par-5 ninth to climb back to level par for the day, everything about her game changed. “So happy I was able to change that.”

Likewise, Korda, sidelined four months in early 2022 after a blood clot was removed from her left arm, took a while to get going. Her putter wasn’t very cooperative on the opening nine, and hasn’t been all week. Suddenly, she ran off four birdies in a five-hole stretch starting at the 11th to assure that Henderson’s final-round will have to be solid to prevail.

Korda’s key for Sunday? For one, she needs to get off to a better start. In all three rounds she struggled to make birdies on the front nine.

“I think you’ve just got to find the bottom of the hole,” Korda said. “That’s the key out here. I don’t know what the weather is supposed to be like, but they’re projecting it to be pretty windy, so just hitting some consistent shots and getting the ball in the cup.”

The most interesting race on Sunday in that division should be for second. Fish (117 points), the 2021 champion, opened a huge lead over military veteran Chad Pfeifer (103), former NHL standout Jeremy Roenick (103) and Lake Nona resident and LPGA great Annika Sorenstam (102).