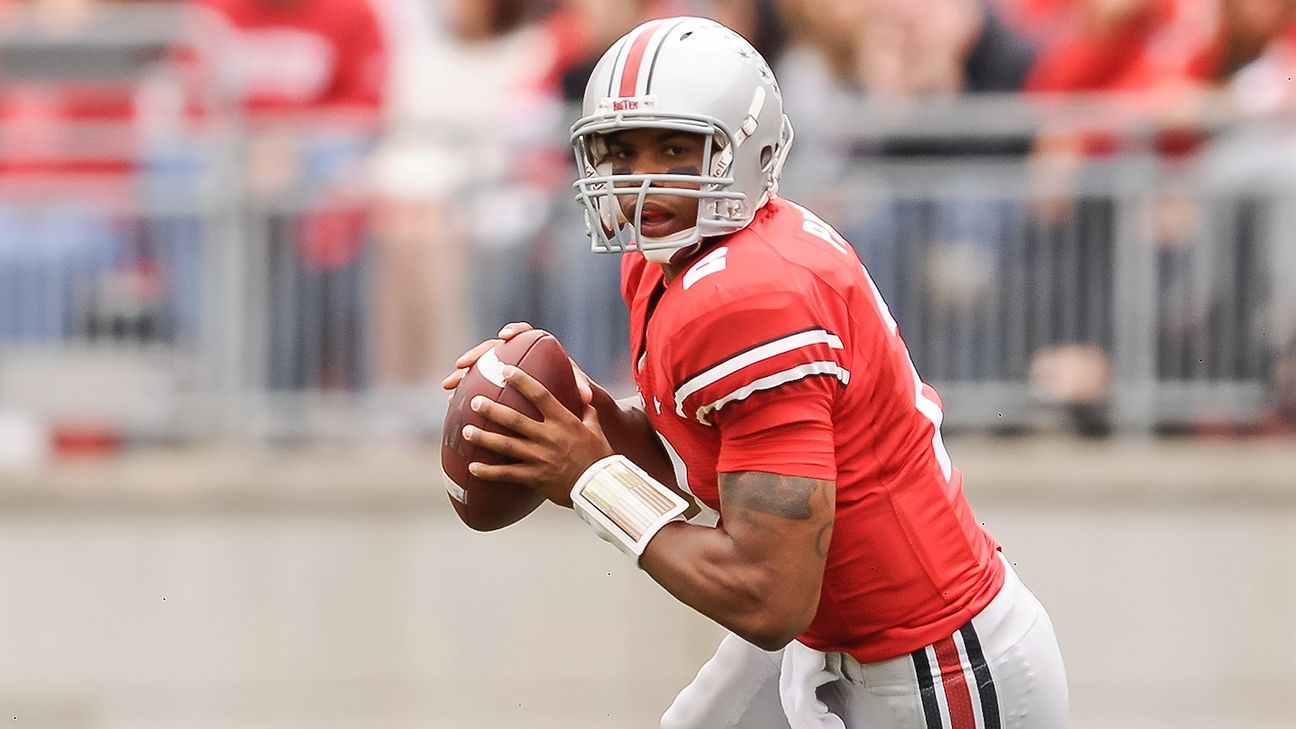 Quarterback Terrelle Pryor and four other former Ohio State football players who were disciplined for receiving free tattoos and other impermissible benefits in exchange for their memorabilia are asking for Buckeyes victories and individual records to be restored. The Buckeyes were forced to vacate victories and records as part of NCAA sanctions nearly a decade ago.

In a statement posted to Twitter on Tuesday, Pryor and the four other former Buckeyes — wide receiver DeVier Posey, defensive lineman Solomon Thomas, offensive tackle Mike Adams and running back Daniel “Boom” Herron — called “for our school records and legacy to be restored so that Buckeye Nation can look at us with the same love and fondness we’ve always had for them.”

The time has come @NCAA @OSU_AD @OhioStAthletics @Channel75live @DPo8 @BOOMHERRON1 #solomonThomas @AdamSchefter we should get our wins back records back and legacy of @JimTressel5 back and not looked past it! NCAA suspended us but let us play in the sugar bowl win vs Arkansas pic.twitter.com/pGpEvJCbx5

The players’ demands come nearly two weeks after new laws in multiple states and NCAA rule changes are allowing student-athletes to profit from their name, image and likeness.

“The affirmation of NCAA athletes’ rights to make a living from their name, image, and likeness is a huge step in the right direction,” wrote the former Ohio State players, who referred to themselves as the “Tattoo 5.” “Armed with the correct resources and support, we know they’ll show what we felt to be true all along — not letting athletes capitalize on what ultimately is their hard work was unjust and unnecessary.”

The NCAA ruled in 2010 that Pryor sold a sportsmanship award from the 2008 Fiesta Bowl, his 2008 Big Ten championship ring and a “gold pants” charm, which is given to Ohio State players after beating rival Michigan.

In a controversial ruling, the NCAA allowed the suspended players to participate in the Buckeyes’ 31-26 victory over Arkansas in the Allstate Sugar Bowl on Jan. 4, 2011. Their suspensions were to begin with the first game of the next season, though Pryor never played for the Buckeyes again after the Sugar Bowl.

Former Ohio State coach Jim Tressel, who guided the Buckeyes to their first national championship in 34 years in his second season in 2002, resigned under pressure in May 2011. His resignation came nearly three months after the university announced it had suspended Tressel for two games — later increased to five games to match the players’ suspensions — and fined him $25,000 for knowing players had received free tattoos from a local parlor.

Tressel, who is now the president of Youngstown State in Youngstown, Ohio, had denied knowledge of his players receiving improper benefits until investigators showed him emails that suggested he had indeed been told in April 2010.

In December 2011, the NCAA banned Urban Meyer’s first Ohio State team from playing in a bowl game and added additional scholarship reductions and another year of probation to the school’s self-imposed penalties. The university had already vacated the 2010 season and returned its bowl revenue share.

“Although this could never undo what we and our families endured for breaking rules that shouldn’t have existed in the first place, we believe reinstating and acknowledging the accomplishments of ourselves and our teammates would be a huge step in the right direction,” the players wrote on Twitter.

The Ohio State players’ plea closely resembles a statement released by former USC star Reggie Bush, who asked that the 2005 Heisman Trophy he won be returned to him and that his records with the Trojans be reinstated. Bush returned his Heisman Trophy to the Downtown Athletic Club after an NCAA investigation determined that he and his family received thousands of dollars in free rent, furniture, cash and travel expenses while he played at USC.