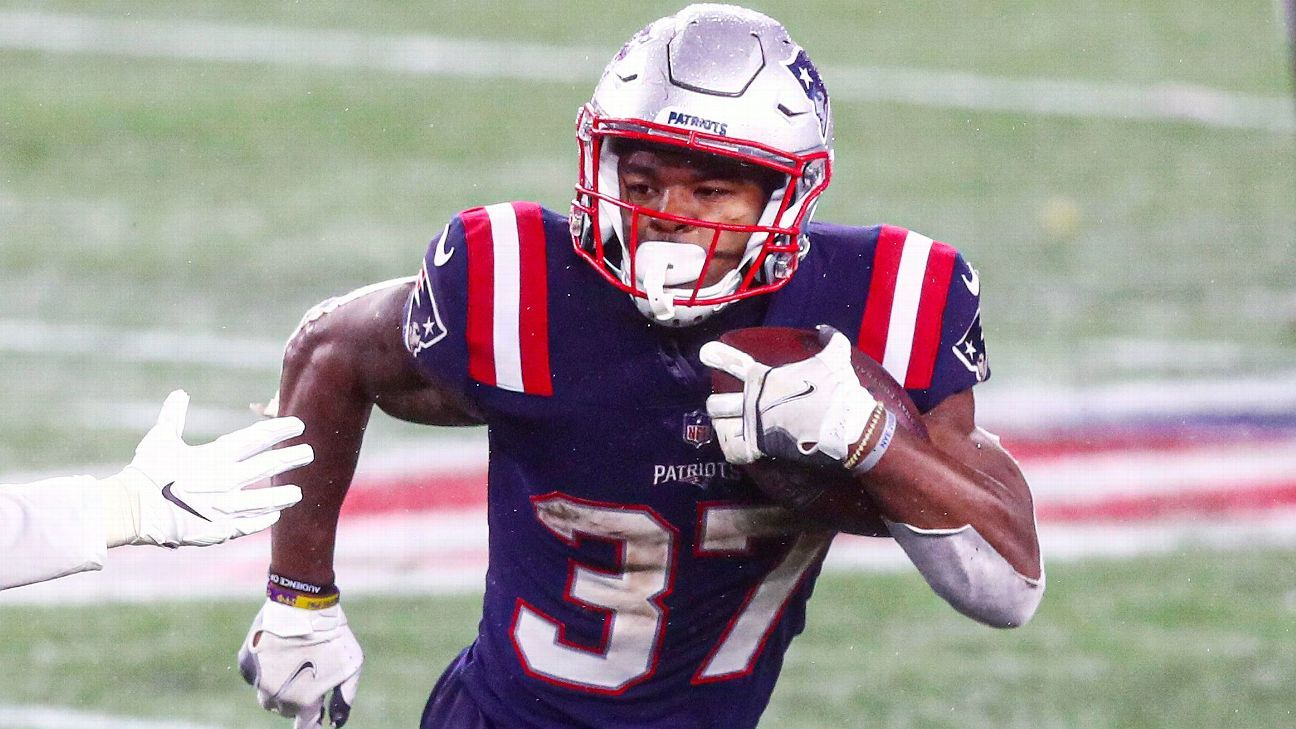 FOXBOROUGH, Mass. — Something is going to have to give when it comes to the crowded New England Patriots running back position in 2021. They can’t all make the final roster.

Start with sure-fire No. 1 option Damien Harris, who Patriots coach Bill Belichick said is “off to a really good start in preparation for the season.”

“Passing back” and sure-handed captain James White is Mr. Reliable, who returns for an eighth season after signing a one-year deal with $2.5 million guaranteed.

The newcomer is 2021 fourth-round draft pick Rhamondre Stevenson, who has drawn early comparisons to LeGarrette Blount because of his hard-charging style at 227 pounds.

Diminutive sparkplug J.J. Taylor continues to ascend as an “excellent make-you-miss type of back,” according to Patriots assistant coach Ivan Fears.

And core special-teamer/versatile backup Brandon Bolden seems like a strong bet to make the roster as he returns from a 2020 opt-out.

The snapshot highlights why running back will be one of the Patriots’ more intriguing positions when the team takes the field for its first training camp practice July 28. However it shakes out, it’s a set-up that seems to fall into owner Robert Kraft’s category of “first-class” problems because it’s always better to have too many players than not enough — especially when factoring in an expanded 17-game regular season.

Harris and Stevenson are locks — Patriots didn’t draft Stevenson 120th overall to cut him a few months later. So the bigger question with the Oklahoma thumper is how quickly he might contribute.

“We’ve got some pretty good players, so he’s going to have to beat somebody out if he’s going to get on the field. We’re not just going to give him a free ride,” Fears said- of Stevenson in early June. “If he doesn’t earn it, he gets to watch. That’s what happens. This is going to be determined by him, not by committee.”

The Patriots have a notable history of rookie running backs going through an initial “redshirt” season before becoming key contributors, with Shane Vereen (2011), White (2014) and Harris (2019) among the most recent examples.

Belichick seems pleased with where the 5-foot-11, 213-pound Harris is after leading the team with 691 yards on 137 carries (5.0 avg.) and two touchdowns last season.

What you need to know about the New England Patriots:

“Damien works extremely hard at all phases — certainly his conditioning and training, running game, passing game, protection, route running, catching the ball,” Belichick said at the conclusion of June’s mandatory minicamp. “He’s got a lot of skill and he can contribute in a variety of ways, and he’s looking to upgrade where he is in every area.”

After Harris and Stevenson, an injury could help further clarify the picture, which is a point Fears said can factor into a rookie being in a redshirt-type of situation. Veteran Tyler Gaffney is also part of the mix, providing depth in training camp and preseason.

Fears is excited for the deep running back group and the restocked offense as a whole.

“We’re starting with a lot of guys who know how to play and we’ve just added some young bodies. You look at what we’ve added on the rest of the roster, there’s a hell of a lot of excitement going around,” he said.

“That’s evident out there in [spring] practice. We need all this time to get them ready for training camp, so we can actually mold ourselves into the team we need to be.”

Cilic powers Croatia into Davis Cup semifinals
Italy tops U.S. in doubles, on to Davis Cup semis
After draw with England, all that matters now is for the USA to beat Iran
Darnold latest to get shot as Panthers QB starter
Barkov will miss beginning of Panthers’ road trip