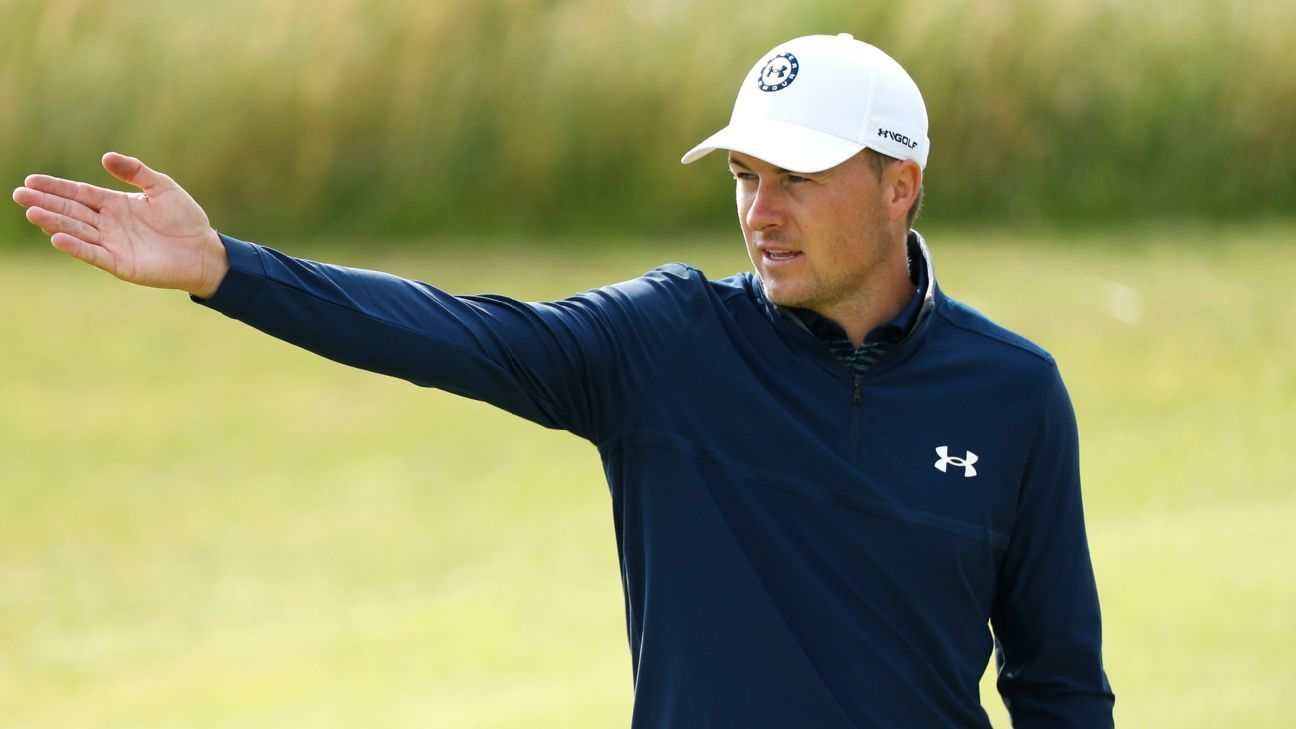 The Open can be produce big-name winners. It can produce surprises. It is all part of the unpredictability that comes with this championship.

That is why our experts came up with a variety of choices on which player will hoist the Claret Jug, become Champion Golfer of the Year and take home 2021’s final major championship.

David Bearman, ESPN Sports Betting
Winner: Jordan Spieth
Why he’ll win: At The Open, and especially at Royal St. George’s, with wild undulating fairways and greens, pot bunkers and fescue, you need to be strong tee-to-green, exceptional around the green, have the ability to scramble well and get long putts close. Enter Spieth, who is 19th in shots gained tee to green, eighth around the green, sixth in short game and seventh in overall putting average. I have faded Spieth at every tight course in America and for good reasons: he’s 188th in driving accuracy and 114th in OTT. But that major hurdle is not as big at the Open links courses, where everyone is going to see their ball bounce all over the fairway hills into the fescue and bunkers. It’s about how you scramble from those spots and the creativity needed to play the undulating approaches and greens that wins you The Open.

Michael Eaves, ESPN
Winner: Viktor Hovland
Why he’ll win: History would suggest picking a player to win back-to-back starts, with the second one coming in a major debut, wouldn’t make much sense — but I’m doing it anyway. Hovland has a game that can translate to any venue. The way he golfed his ball at the BMW International says to me that he’s more than ready to win his first major. It would only make the story cooler if he were to win it in his Open debut.

Chris Fallica, ESPN Stats & Information
Winner: Rory McIlroy
Why he’ll win: He might have missed the cut in the Scottish Open. His last Open was brutal; he missed the cut at Royal Portrush. But McIlroy’s record in The Open before that is hard to argue with — win, T-5, T-4, T-2. He was right in it on Sunday this year at the U.S. Open at Torrey Pines and that little taste of coming close to winning another major should do Rory well here, where he will not have to hit driver often and the greens shouldn’t be as tricky.

Charlotte Gibson, ESPN.com
Winner: Louis Oosthuizen
Why he’ll win: I’m going with someone who I think deserves to finally win. A man who keeps coming so close. Oosthuizen, the 2010 Open winner, claimed three top-three finishes in his past four major starts, including runners-up at the PGA Championship and U.S. Open. I refuse to believe that these second-place finishes aren’t going to lead him to another major victory. His time has to come again. Why not this week at Royal St. George’s?

Bob Harig, ESPN.com
Winner: Jon Rahm
Why he’ll win: The fact he didn’t win the Scottish Open on Sunday might be the best thing that could have happened to the U.S. Open champ. Rahm shot a final-round 68, which actually dropped him to seventh and cost him the No. 1 ranking. Dustin Johnson, who didn’t play and hasn’t done anything in months, moved back to the stop spot. Rahm has to derive some motivation from that. Overall, he’s playing the best of anyone. And he showed some Open chops with a tie for 11th at Royal Portrush two years ago. 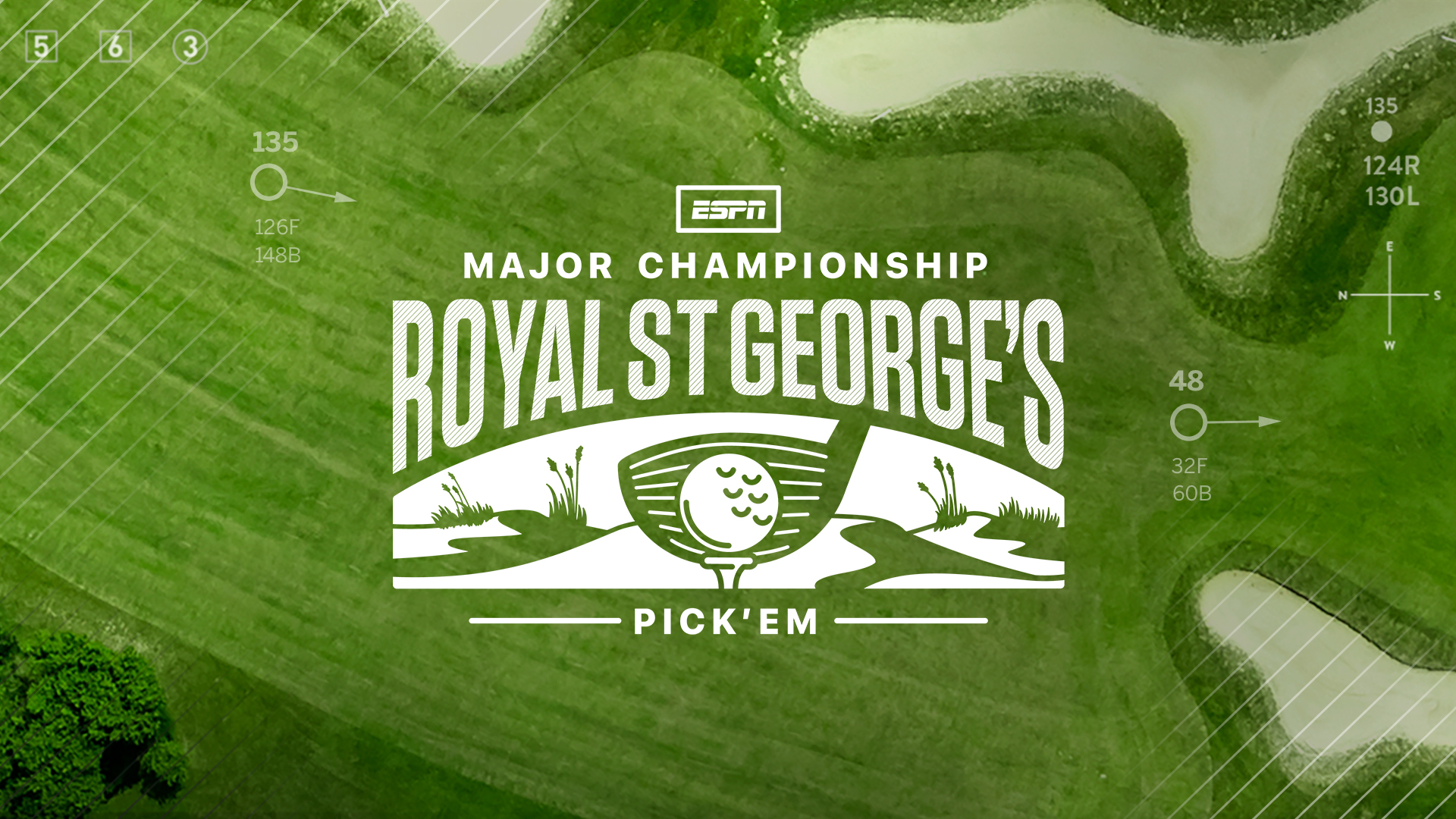 Make your picks and compete for a chance to win $5,000! Make Your Picks

Doug Kezirian, ESPN Sports Betting
Winner: Jon Rahm
Why he’ll win: He’s the betting favorite for a reason. He got over the hump and we have seen golfers thrive in majors once they break through. I expect a similar situation with Rahm.

Anita Marks, ESPN Sports Betting
Winner: Brooks Koepka
Why he’ll win: Brooks lives for the big stage. He finished runner-up at the PGA Championship this season. His knee issue is in the rear window. His game is on point. Brooks’ track record across the pond is solid, finishing in the top six at Birkdale and Portrush within the past five years. He will be toward the top of the leaderboard Sunday — and he delivers.

Andy North, ESPN
Winner: Xander Schauffele
Why he’ll win: It’s time for him to get his first major. Royal St. George’s is a weird, bouncy course that takes great patience because of the strange bounces you will get. You have to putt well. Xander will do that.

Nick Pietruszkiewicz, ESPN.com
Winner: Justin Thomas
Why he’ll win: Well, I took a few majors off before going back to my traditional pick. Honestly, one of these times I have to be right … right? He has all the shots this championship requires, the imagination to see the slopes and how to use them. It’s going to come down to one club — the putter. Can he get the ball in the hole? This week, he rolls it well and wins.

Mark Schlabach, ESPN.com
Winner: Jordan Spieth
Why he’ll win: Spieth’s recovery from a three-year slump has been overshadowed by Phil Mickelson’s victory at the PGA Championship and Jon Rahm’s first major win at the U.S. Open. But Spieth’s play over the past five months has been inspiring, with a victory at the Valero Texas Open, followed by a tie for third at the Masters and solo second at the Charles Schwab Challenge. He has played some of his best golf in Europe, winning at Royal Birkdale in 2017, tying for fourth at St. Andrews in 2015 and tying for ninth at Carnoustie in 2018. He won’t have to worry about hitting it as far at Royal St. George’s, and his ballstriking, touch around the greens and putting will carry him to a second Claret Jug.

Marty Smith, ESPN
Winner: Brooks Koepka
Why he’ll win: It’s a major. It’s what he does.

In this edition of America’s Caddie, Michael Collins visits Torrey Pines Golf Course in Southern California to tee up the 2021 U.S. Open. Stream now on ESPN+

Tom VanHaaren, ESPN.com
Winner: Brooks Kopeka
Why he’ll win: He hasn’t finished outside the top 10 in a major this year. In Koepka’s past four tournaments, he has missed the cut once and finished in the top five three times, including second at the PGA Championship and fourth at the U.S. Open. He has said in the past that the majors get the majority of his focus and this is a great opportunity for him to add a trophy he doesn’t yet have in his trophy case.

Scott Van Pelt, ESPN
Winner: Brooks Koepka
Why he’ll win: The Open is a really tough test. While I’m tempted to pick Rahm again — and why not? — I like Brooks to add the jug to a crowded trophy case.

Kevin Van Valkenburg, ESPN.com
Winner: Jordan Spieth
Why he’ll win: Maybe it’s the new season of Ted Lasso being upon us, but I’m ready to believe again. The wind always blows at St. George’s, and Spieth remains one of the best wind players alive. His gift remains his imagination and ability to see unique shots play out in his mind and then execute them. He had a better U.S. Open than you probably remember, playing the last three rounds in 4 under after a sloppy 77 in Round 1 doomed his chances to contend. Spieth has one Open win and could (in theory) have won two others; in 2015 when he missed a playoff by a shot, and in 2018 when he was the third-round leader at Carnoustie before a slow Sunday fade dropped him out of contention. A fourth major would complete his return from the golf wilderness.

Josh Weinfuss, ESPN.com
Winner: Dustin Johnson
Why he’ll win: He’s due. He’s been in a bit of a rut since the Masters, not finishing better than T-8 over that stretch. He was T-10 at the Palmetto Championship at Congaree, followed by a top-20 finish at the U.S. Open. And, on top of all that, he hasn’t played since the end of June. He has experience at Royal St. George’s, finishing tied for second there in the 2011 Open. A decade is a long time, but he can go into the tournament knowing he’s played well on those grounds before, which is a major hurdle for those who have struggled at Open courses.