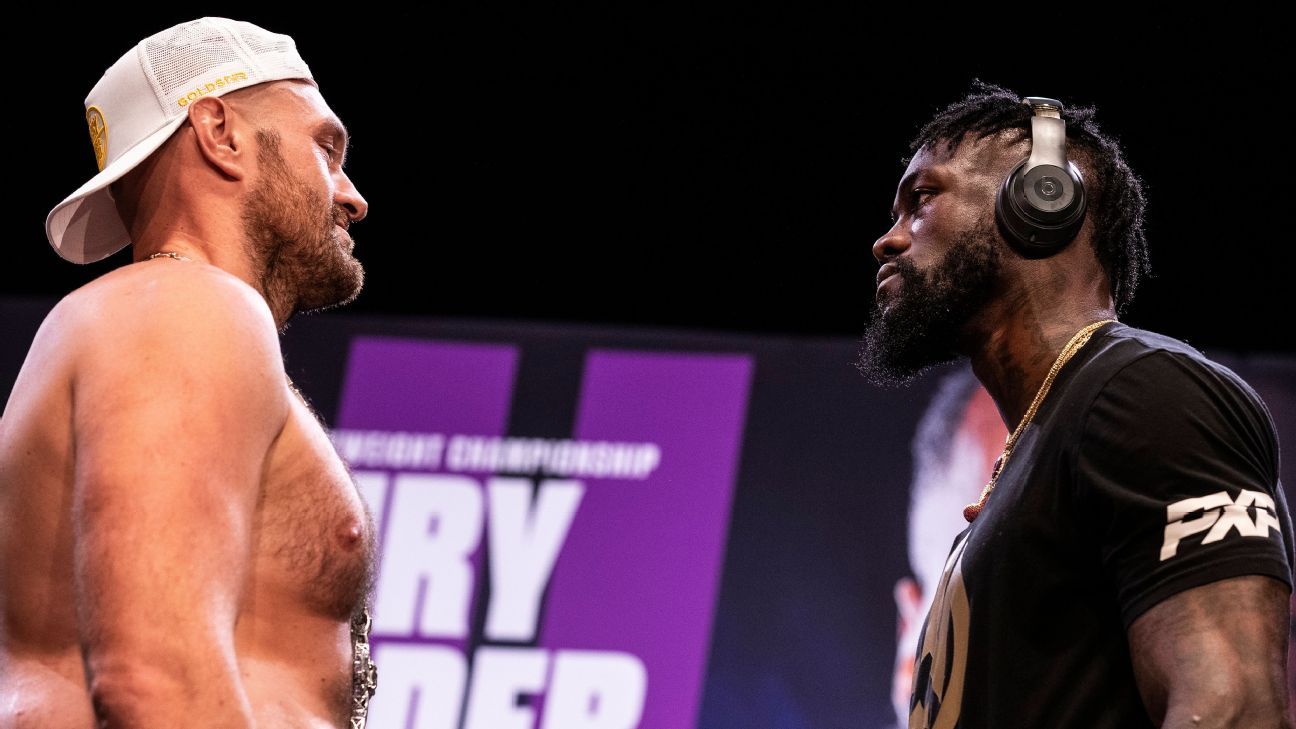 Tyson Fury and Deontay Wilder are set for their trilogy fight for the WBC heavyweight championship – again.

The battle between big men is now set for Oct. 9 at T-Mobile Arena in Las Vegas, sources tell ESPN. The fight, an ESPN+ and Fox PPV, was scheduled for July 24 but was postponed last Thursday after Fury tested positive for COVID-19 amid an outbreak in his camp. ESPN reported at the time that Oct. 9 was the target date for the rescheduled title tilt.

The champion, ESPN’s No. 6 pound-for-pound boxer, needs time to recover and resume training camp, pushing the fight to October, but there were other also other considerations. Manny Pacquiao and Errol Spence Jr. meet in a major PPV title fight on Aug. 21. Canelo Alvarez, boxing’s biggest star, remains in talks for a Sept. 18 fight with Caleb Plant.

Top Rank and PBC, which will co-promote Fury-Wilder, along with ESPN and Fox, are trying to maximize PPV revenue for the third meeting. The second fight, which Fury won by seventh-round TKO in February 2020, generated nearly $17 million at the gate, a Nevada record for a heavyweight title fight.

“It was a crazy roller coaster toward this fight,” Fury said at last month’s news conference in Los Angeles to promote the fight. “I always say, ‘You’re never fighting someone until you’re in the ring opposite them.'”

The first fight between Fury and Wilder was in December 2018, a disputed draw. Despite Fury suffering two knockdowns — including one in the final round — most observers believed he deserved the nod.

The “Gypsy King” left no doubt in the rematch, scoring two knockdowns himself en route to a seventh-round stoppage after Wilder’s cornerman, Mark Breland, threw in the towel.

Neither Fury, 32, nor Wilder has appeared in the ring since. Wilder, 35, exercised his contractual right to a third fight afterward, but the pandemic prevented Top Rank (Fury’s promoter) and PBC from staging the fight before a full audience.

Top Rank and PBC attempted to stage the bout last December after a previously planned October date was deemed unfeasible due to COVID-19 restrictions, but the unexpected resumption of the college football season left few available PPV dates in the final month of 2020 with two networks involved.

Fury (30-0-1, 21 KOs) and his team then considered the rematch clause expired and pushed forward with negotiations for a mega fight with fellow Englishman Anthony Joshua, which would crown an undisputed heavyweight champion. The sides agreed to a deal in May, with Fury announcing on May 16 the fight would take place Aug. 14 in Saudi Arabia.

On May 17, one day after Fury announced he would meet Joshua in August, Weinstein ruled that he owed Wilder another fight.

“I didn’t feel any way about Fury trying to negotiate another fight,” Wilder said at the news conference last month in Los Angeles. “We knew we were in the right and we knew they couldn’t run.”

Now Wilder has a new date circled on his calendar for that long-awaited shot at revenge.