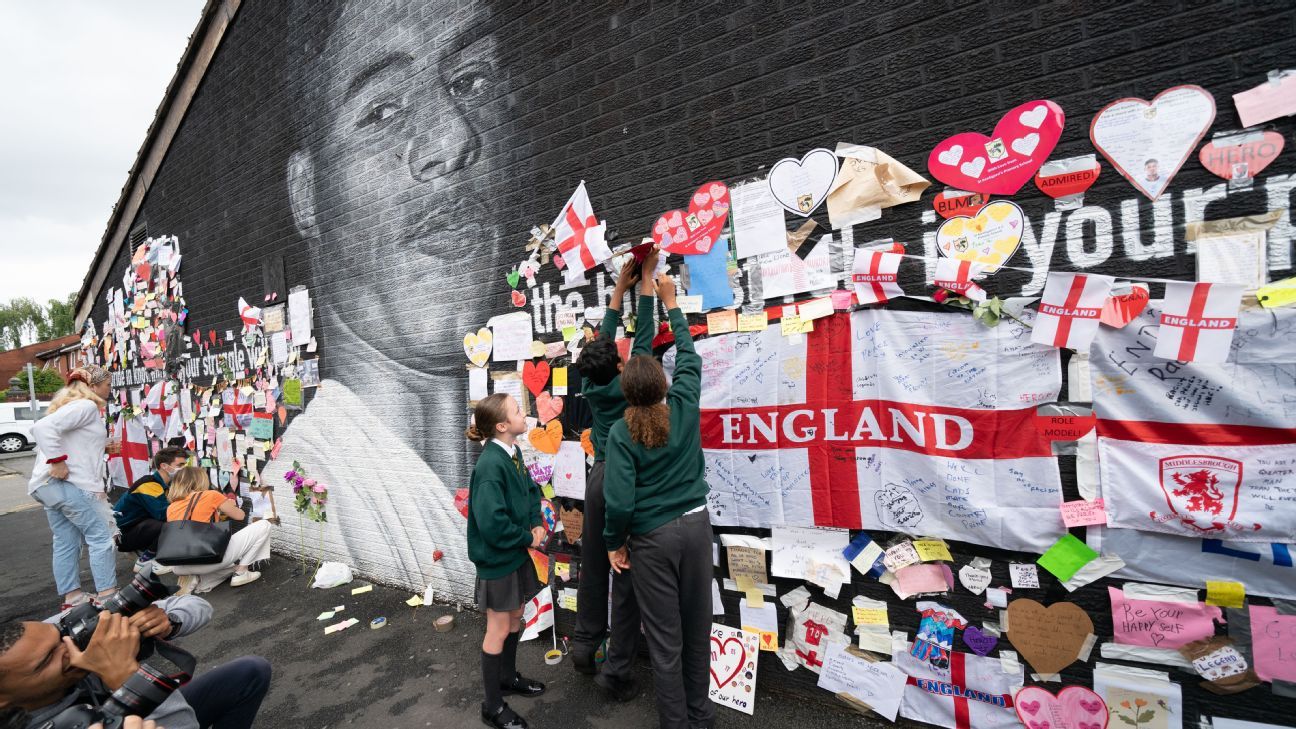 Withington, MANCHESTER — It was around 3 a.m. on Monday when Greater Manchester Police received the first report that the mural of Marcus Rashford in the south of the city had been vandelised.

A few hours earlier, 200 miles away at Wembley Stadium, Rashford, along with England teammates Jadon Sancho and Bukayo Sako, had missed penalties in a shootout to decide the Euro 2020 final and Italy had lifted the trophy as a result.

In the time in between, the three players, all Black, had been subjected to a wave of racist abuse on their social media accounts (police have since arrested four people.) Rashford and Sancho were mentioned in blue paint scrawled across the mural of the Manchester United striker painted in the suburb he used to call home, around four miles from Old Trafford.

By the time shoppers began visiting ‘Withington Fruit and Vegetables’ or the ‘Coffee House Cafe’ on Monday morning, the abuse had been covered with black sheets. Then came the first messages of support. Soon, passers-by became a crowd and quickly something bad had turned into something good.

Turn off Wilmslow Road into Copson Street and the first thing that catches your eye is the red “Road Closed” sign at the mouth of Moorfield Street. It had to be put there because of the sheer volume of visitors since Sunday’s Euro 2020 final. The posters and post-its of support for Rashford, Sancho and Sako attached to the wall have started to buckle under their own weight.

One says: “You are an inspiration to me and all young black people in Manchester. Don’t let the hate get to you as you are such an amazing role model. Keep going what you’re doing.”

Another reads: “Our hero.”

Rashford is a hero. He has an MBE, been praised by former U.S. president Barack Obama, and won the Pat Tillman Award for Service at the 2021 ESPYS all for his amazing work in the community. He made the UK government U-turn over his campaign for food vouchers during school holidays for children who normally receive free meals during term time if their parents receive welfare support, landing £120 million in funding, and helped raise more than £20m for food distribution charity FareShare during the COVID-19 outbreak.

One message from Reggie, aged 6, reads simply: “Thank you for all our dinner.”

Writing on Instagram, Rashford said: “The messages I’ve received have been positively overwhelming and seeing the response in Withington had me on the verge of tears. The communities that always wrapped their arms around me continue to hold me up.” In his passionate post he added: “I’ve grown into a sport where I expected to read things written about myself. Whether it be the colour of my skin, where I grew up, or, most recently, how I decide to spend my time off the pitch.

“I can take critique of my performance all day long, my penalty was not good enough, it should have gone in but I will never apologise for who I am and where I came from. I’m Marcus Rashford, 23-year-old black man from Withington and Wythenshawe, South Manchester. If I have nothing else I have that. For all the kind messages thank you. I’ll be back stronger. We’ll be back stronger.”

Images of the mural with thousands of messages running the length of the wall are striking, but walk around for a while and it is the hum of conversation that becomes most noticeable.

One father said he made the two hour trip from Birmingham to show his two sons that “not everyone thinks the same way” as social media abusers and racists.

Close by, parents of a boy no older than five or six were explaining that the notes on the wall were saying nice things about football players who have been singled out because of the colour of their skin. The boy looked puzzled by the idea that it was even a thing.

On Tuesday evening, hundreds of anti-racism protestors took the knee in front of the mural. The following afternoon, Caroline Dunn, a teacher at The Dean Trust School in Ardwick made the three-mile trip with a handful of students. Later on a group of younger pupils from another school arrived.

“We really wanted to show our support for the three individuals but also the bigger picture that this abuse won’t be tolerated,” Mrs Dunn told ESPN.

“The fact you can come and show a way to share your strength of feeling in a really positive way and offer support for people who are suffering or are being abused is really important. Just being able to demonstrate that every individual can do something to make a positive difference and coming together as a community to stand up for what matters and to say that this abuse won’t be tolerated is so important.

“Our young people are articulate, they’re mature and they have a strong voice. They are the next generation and they want the world to be a better place.”

Withington Walls, who commissioned the mural by street artist Akse last year to mark Rashford’s school meals campaign, are planning to preserve and display as many of the messages as possible. They are also hoping to raise £40,000 to repair the mural and install CCTV cameras to ensure it remains safe from vandalism in the future.

Police are continuing to investigate but Ed Wellard, founder of Withington Walls, insists the mural and the messages of support for Rashford and his teammates have already had a bigger impact than any penalty the courts can hand out.

“Racism is learned behaviour,” he said. “I think it should be more about education than punishment. I don’t think you’re going to change people’s minds with punishment.

“There needs to be active discussion about racism in this country, within sport, within society, on social media, and I think it’s heartening this sorry incident is allowing us to have those discussions because that’s the way we will move forwards as a country.”