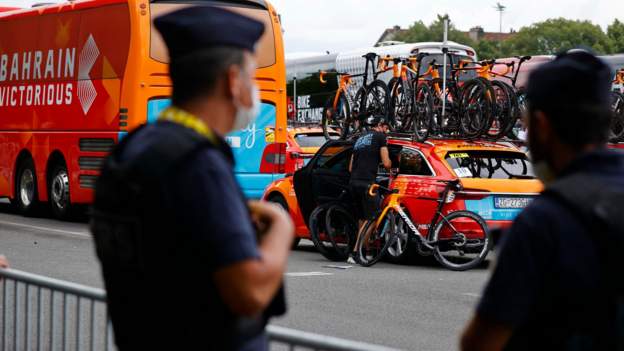 French Police searched the team hotel of Bahrain-Victorious after stage 17 of the Tour de France on Wednesday.

Riders’ rooms and the team bus were searched but no arrests were made.

The Bahrain-based team confirmed they had provided copies of their riders’ training files to police.

The team’s technical director Vladimir Miholjevic said they have “complied with all the officers’ requests” and were committed to adhering to “all regulatory requirements.”

Miholjevic added the situation had disturbed his riders’ recovery for stage 18 on Thursday, the 129.7km-route from Pau to Luz Ardiden, which is the final mountain stage and arguably the most punishing day of this year’s race.

Bahrain-Victorious have enjoyed a successful Tour so far, despite the loss of their main general classification hope Jack Haig in a crash on stage three.

Dutch climber Wout Poels has also starred at the Tour and currently leads the King of the Mountains competition, while Italian sprinter Sonny Colbrelli, twice in the top three on mountain stages, sits third in the points classification.