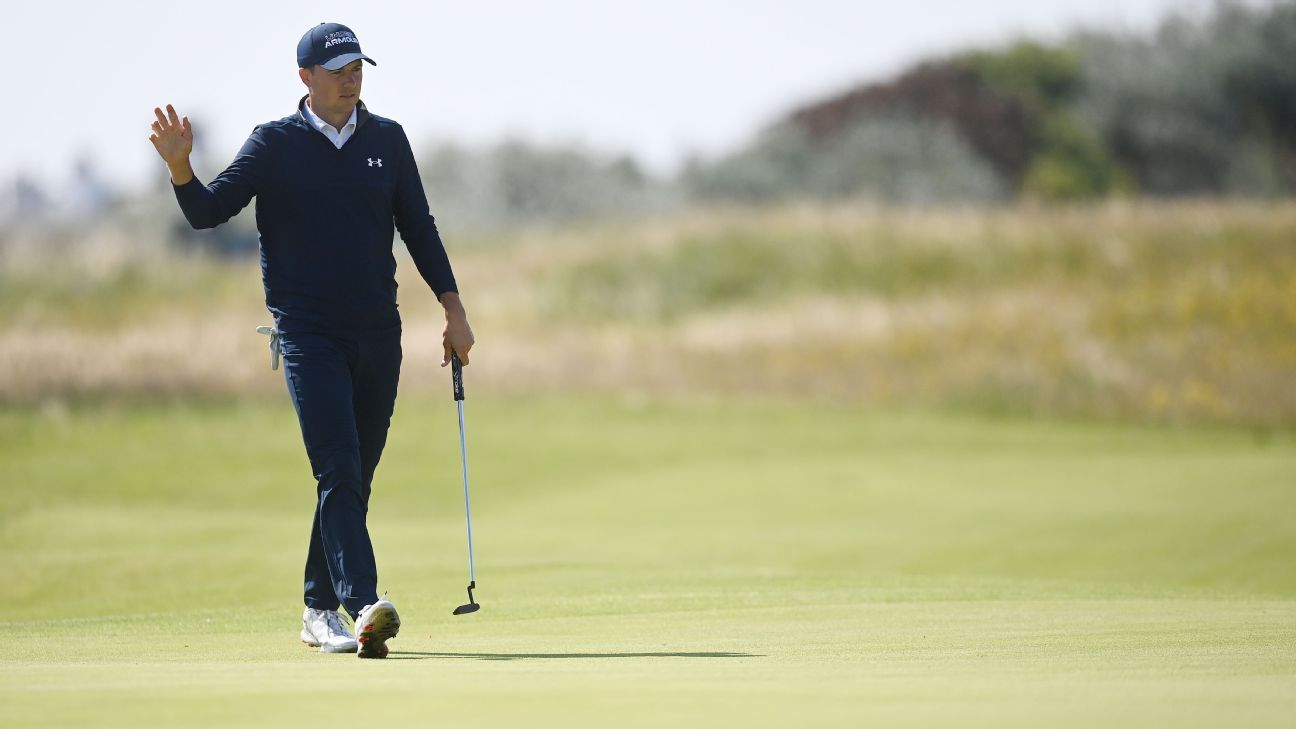 SANDWICH, England — The mean-spirited among us prefer to see white caps on the English Channel, umbrellas breaking in half, waterproofs as the preferred clothing. If the wind wants to howl at a reasonably high rate, that would be good, too.

That is Open weather. The kind that both showcases — and sometimes exposes — the best golfers in the world. It can be maddening and frustrating, but it is pure entertainment for the golf public that enjoys seeing professionals endure the elements at the game’s oldest championship.

Of course, Mother Nature does not always cooperate. And there are many who were just fine with the rather pleasant day that unfolded at Royal St. George’s for the opening round of the final major championship of 2021.

There was sunshine for a good while and not a hint of rain. There was plenty of wind, however, but not enough to keep several players from breaking par. Watching Thursday would make you wonder what all the fuss was about.

Royal St. George’s, near Sandwich Bay and within view of France, has rarely stoked the passions of links lovers. It doesn’t rate high in terms of Open venues, either. What it lacks in beauty it often makes up for in brawn, although that was missing in relatively benign conditions over the course of the first round.

“Why don’t we love it?” said England’s Paul Casey, who began the tournament with a 68. “Because it’s so damn difficult. It is.”

Casey grew up in Weybridge in the county of Surrey and recalled matches against the county of Kent played at Royal St. George’s when he was an amateur.

The place beat him up.

And yet, on Thursday, Louis Oosthuizen shot 64 to take the first-round lead, just the sixth score of 64 or better in the 15 Opens played at Royal St. George’s dating to the late 1800s.

Jordan Spieth and Brian Harman are a shot back. There were nearly 50 players under par. And the average score for the day was only slightly over par. That is unheard of for an Open, especially one at Royal St. George’s, where Tiger Woods hit the fairway with his opening tee shot in 2003, saw it bounced into the rough. The ball was never found. He started with a two-shot penalty and a triple-bogey 7.

He ended up finishing two strokes behind Ben Curtis.

“Slightly out of order, isn’t it?” Casey said of what happened to Woods. “I think that is why setup can kill people’s enjoyment of this golf course. The setup this week is phenomenally good.”

And perhaps that is why the scoring was rather good. And perhaps why there have been less shots taken of the course.

Brooks Koepka was just being honest when he said early in the week that it wasn’t his favorite, due to all the blind shots. Rory McIlroy pretty much hated it 10 years ago when he came to Royal St. George’s as the reigning U.S. Open champion and walked away frustrated after a tie for 25th.

But McIlroy noted some of the hard edges have since been lessened. Some of the moonscape that the course is noted for — the mounds and humps in the middle of fairways — are less severe due to summer rain and, perhaps, with some direction to the Royal St. George’s crew via the R&A.

“We’re very conscious that this course has got a lot of very severe undulations in the fairways and in the landing areas,” R&A chief executive Martin Slumbers said. “We’ve been conscious right the way through to ensure that a ball that lands on that doesn’t get kicked off at a pace that could take it into deep, deep rough. It is a bit greener out there than you would have seen at some other courses, and that’s purposeful.”

It is pretty rare for those in charge of setting up tournaments to admit they were concerned about a course being unfair.

But that is part of what is going on this week, and part of the reason you are seeing a lot more smiles than frowns.

“I would say if anything just a little bit of softness,” said Spieth, who played the course for the first time in competition and shot 65 to finish one back of Oosthuizen. “I kind of got away with a couple tee shots in the first cut that maybe if it was firmer may have worked their way just into the fescue. I’m sure for a lot of people it’s the same way.

“It’s a course where you have so much undulation in the fairways that if it gets firmer it gets very bounce-dependent. That’s what I had heard coming in. Then after playing it you can see that. The wind is up, and the pins are on knobs and crowns and they’ve done — they put a few pins in some really fun spots for us [Thursday] where you could get at them in some bowls. But that’s only a few of the holes. The rest of them, they’re on some of the more difficult locations to kind of separate the field out. If you’re really striking it well or you’re not, you end up in better positions versus not.”

Spieth was aware of the course’s reputation before he arrived and tried to keep an open mind.

“Historically I’ve come into venues I’ve never seen before in any tournament and I’ve always just tried to find something I love about it,” he said. “I came in here and I’ve been in a really good mood about it. I thought, “Man, this could be a really fun kind of cool, tricky track. It’s certainly odd compared to some of the other ones.”

A similar forecast is in the works for the rest of the tournament, with temperatures in the high 60s and a pretty brisk breeze that could sometimes gust up to 25 mph. That can cause fits, as the best in the world are filled with doubt when they are unsure what impact the wind will have, especially on a links where there are so many odd bounces and breaks.

Continued wind means the course is likely to get firmer and faster, bringing some of those old concerns that gave Royal St. George’s a less-than-stellar reputation back into play. Unless, of course, the powers-that-be step in.

“I think the architecture is absolutely phenomenal,” Casey said. “Some of the best bunkering and green approaches. The only reason it never makes my top sort of five in the UK is one too many blind tee shots for my liking. And that’s my personal preference. But that’s kind of a weak excuse for not putting it in my top five, isn’t it? But there’s several. You tend to lose sight of the golf ball quite frequently on the tee shots.

“But the fact that they moved the first fairway slightly left this year is a great example. Tiger’s tee shot right down the middle [in 2003] rolled off to the side and he lost the golf ball. Crazy. I think that is why setup can kill people’s enjoyment of this golf course. The setup this week is really good.”

The setup is good. The weather is good. And, so far, the golf is good.

Zhu wins Thailand Open for first tour title
Strong wind suspends 3rd round at Pebble Beach
First look at college football’s 2024 recruiting cycle: Players, schools and storylines to watch
Panic Index: Chelsea, Liverpool, AC Milan in trouble when it comes to next season’s Champions League
‘We’re wired to go after it every year’: Patrick Mahomes and the Chiefs are built to last