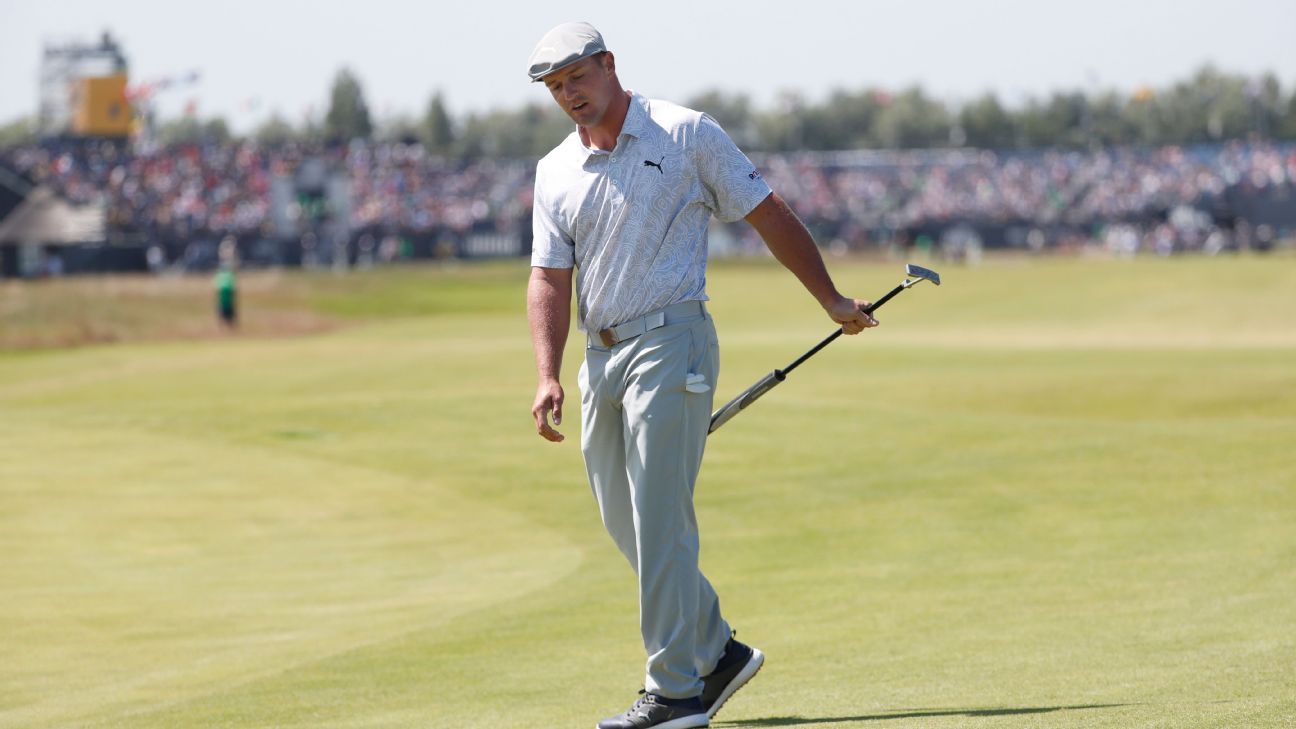 SANDWICH, England — Bryson DeChambeau stepped to the first tee Friday and tried his best to show his self-deprecating side. He pulled out a 4-iron — not the evil, no-good driver that caused worldwide headlines the day before — then played to the crowd as he was booed.

The more those fans surrounding the first tee heckled him, the more he egged them on, finally turning those jeers to cheers before becoming embarrassingly close to coming up short of the fairway with that 4-iron.

Say this about Bryson: he is immensely popular with golf galleries.

Spectators love seeing him pull out the driver and blast it to eternity. He enjoys being a showman. DeChambeau engages them, too, and that bit of interaction goes a long way. He often will purposely pull out an iron, just to draw the negative reaction, before going to the driver and hearing applause.

He might take a beating on social media, but DeChambeau is an interesting character, too, who does things in an unconventional manner that has given golf a boost — through his exercise program, eating regiment, single-length-shaft irons and even his ongoing feud with Brooks Koepka.

But he also can’t get out of his own way these days.

Koepka’s not helped him any, continuing to taunt and escalate their differences, including again on Friday when he tweeted out a photo of himself “Driving into the weekend!’

Driving into the weekend! pic.twitter.com/poSQG0mrvC

Bryson seems OK with all of that. But the split with his caddie on the eve of the Rocket Mortgage Classic two weeks ago and then his inexplicable rant after the first round of the Open about his driver and how it “sucks” created unnecessary drama and showed that, perhaps, it’s time for a reset.

For all the theatrics, it’s been a rather mundane 2021 for DeChambeau when it comes to the bottom line — winning. The sideshow has overshadowed the main show.

Yes, he won the Arnold Palmer Invitational, getting everyone excited about trying to drive a par 5 at Bay Hill and dueling veteran Lee Westwood. He had a chance to win a week later at the Players, only to top a shot into the water early on the front nine.

He was in position to defend his U.S. Open title and led with nine holes to play at Torrey Pines. Then shot 44 over the closing nine and dropped to a tie for 26th. He blamed that on bad luck.

All the banter about his caddie, Tim Tucker, seemed to get the best of him at the Rocket Mortgage, where he won in dominating fashion in 2020 but missed the cut this time around.

And then with the caddie issue seemingly settled here, DeChambeau said he was in a good place — only to go off on his equipment maker, Cobra Golf, after a first-round 71.

“The driver sucks,” he said, all but unprompted, in response to a question that was all but setting him to answer in the positive; his score of 71 was actually quite good considering where he hit it.

And then the golf world imploded. As incredible as DeChambeau’s words of frustration were, so too were those of Ben Schomin, the Tour rep for Cobra who pushed back in an interview with Golfweek, basically saying the 27-year-old, eight-time PGA Tour winner needs to grow up.

“[On Thursday] I wasn’t driving particularly well and it got the best of me, unfortunately,” DeChambeau said late Friday after making the 36-hole cut on the number by playing the last five holes in 2 under par, including two good two-putts pars at the final two holes.

DeChambeau declined to speak to the media and various outlets following his round, according to the R&A — which might have wanted to move on from a guy who is miles out of contention. But to his credit, DeChambeau stopped for a group of reporters he knows, apologized, explained his frustration and said he hoped to move on from all of it.

The big question: Can he?

DeChambeau admitted he was distracted during the second round. His quest to match his physical strengths with the best of technology is complicated, but shouldn’t cause so much angst as to miss the simple fact that he swings a club at a ball and does so very well. He’s certainly not alone when it comes to frustration over where tee shots land.

But as was pointed out to DeChambeau, he could have managed his way around Royal St. George’s without hitting so many drivers. He actually did that Friday, using the club just six times and finding 10 of 14 fairways — six more fairways than a day earlier.

The result was only one stroke better, but the amount of stress alleviated might have been worth far more.

“I played the game growing up so I could win tournaments and be one of the best players in the world,” he said. “Of course it would be great to not be famous, but that’s what comes with it. And there are three or four things going on right now that everybody latches onto and says out there on the golf course.

“It is what is. I’m 27. I’m human. I make mistakes. I continue to keep making them and I need to learn from them.”

Perhaps DeChambeau has learned his lesson. He’s going to go this year without adding a major to his 2020 U.S. Open — and he wasn’t close in any of the four in 2021.

But there are other things to play for, including a World Golf Championship event in a few weeks, The Olympics and the FedEx Cup playoffs.

And, of course, the Ryder Cup. If DeChambeau doesn’t have things sorted by late September, it will be a long week in Wisconsin.