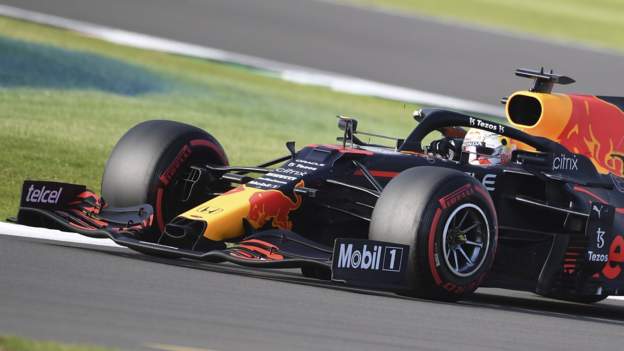 Verstappen was 0.375 seconds ahead of Ferrari’s Charles Leclerc. The second Ferrari of Carlos Sainz was third ahead of Alpine’s Esteban Ocon.

But the headline lap times were not relevant to performance in the session.

A crowd of about 100,000 is expected at Silverstone throughout Saturday, with clear blue skies and temperatures of around 26C adding to the sense of occasion.

Hamilton has said he “needs to win both races” this weekend in an attempt to close the 32-point championship lead Verstappen has built up with four wins in the past five races.

There are three championship points for the winner of the ‘sprint’, with second and third getting two and one respectively.

As the teams do not reveal the fuel loads, it was impossible to compare across rival outfits in terms of race pace in this final session, but the hour of running did suggest that choosing the starting tyre for the ‘sprint’ might be harder than teams initially thought.

The expectation was that the medium tyre would be the favoured one for the sprint, which will feature no planned pit stops.

But when Leclerc and Sainz did simultaneous runs on the medium and soft tyres, they set average lap times that were almost exactly the same.

The sprint has been billed by F1 as a flat-out charge, but the drivers are well aware that they will have to manage tyres in the same way as in a Grand Prix.

Verstappen told BBC Sport: “It is one third of a race distance so we all stick a tyre on that will last to the end. You cannot go flat out on any tyre for 100km, so you still have to save otherwise the tyres will light up. So there is never going to be a flat-out race at the moment.

“What is very important is lap one, lap two. People are going to fight and try and get a position, and then if you have the same tyres on, things will stabilise because it basically works like a first stint of a race. You won’t see people pushing, sliding, locking up all the time.

“We have to wait and see how it turns out but I don’t expect every lap people will be changing position.”