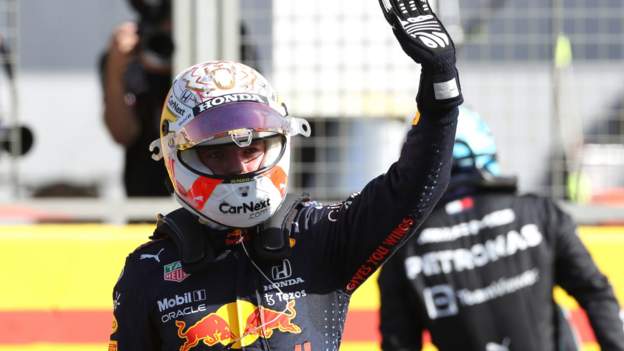 The Dutchman got the jump on Lewis Hamilton off the line and led comfortably to the end to extend his championship lead by a point to 33.

Hamilton chased Verstappen all the way and crossed the line 1.4 seconds back.

The race was enlivened by a brilliant first lap by Fernando Alonso, the Alpine driver going from 11th to fifth.

The result of the sprint sets the grid for Sunday’s Grand Prix, so Alonso’s gamble on starting on soft tyres paid off handsomely.

He lost places to the McLaren drivers Lando Norris and Daniel Ricciardo during the 17-lap race but still gained four places on the grid for the Grand Prix on Sunday from his qualifying position.

Mercedes’ Valtteri Bottas also gambled on softs at the start but failed to make any ground on Verstappen and settled into a lonely drive to third place, ahead of Ferrari’s Charles Leclerc, Norris and Ricciardo.

Verstappen said: “It is difficult to pass but we had a good start and a good fight with Lewis around the first lap. We were pushing each other hard and at the end the tyres were blistering and we had to look after them.

“It’s a funny way to score pole position but we will take it and see what happens tomorrow.”

The drivers were taken around the track on a bus after the race to do their interviews and Hamilton said: “I’ve got to say thanks to all the fans. The energy I am getting from them is amazing.

“I am sorry I wasn’t able to get the win for them today. But they are just so strong,. In the race he was pulling away, there was nothing I could do to stay with him.

“I don’t know whether it was the most exciting race but we should do more like that or a variation on it because it makes the weekend more enjoyable.”

What about that from Alonso?

The sprint event, which involved moving qualifying to Friday, was introduced to spread the competitive action across the weekend but also in the hope of an action-packed shorter race on the Saturday.

In the end, the battle at the front was static after Verstappen’s electric start and an attempt by Hamilton to pass the Red Bull around the outside of Copse on lap one.

The Dutchman controlled the pace, Hamilton could not get close and the pair nursed blistering tyres in temperatures of 28C in front of a packed crowd of 100,000.

But Alonso’s stupendous start created the real action of the day.

The two-time world champion had gambled on starting on soft tyres while almost everyone else was on mediums, and it worked a treat as he went around the outside of Ferrari’s Carlos Sainz, Aston Martin’s Sebastian Vettel and Red Bull’s Sergio Perez in the first two corners, passed Ricciardo’s McLaren on the outside into Turn Three and then Norris around the outside of the 180mph Copse corner.

The Alpine did not have the race pace of the cars that qualified in front of Alonso, and he led a train for the rest of the race.

Norris passed on lap six into Turn Three and Ricciardo on lap nine as the two battled side by side through seven corners.

Next up to challenge Alonso was Vettel. Alonso was warned by officials for weaving under braking but even after that stopped Vettel was unable to make it past.

Stewards are investigating a collision between Russell and Sainz on the first lap to establish whether either driver deserves a penalty. Sainz went off the track after they touched wheels but recovered to finish 11th.

The big loser was Red Bull’s Sergio Perez, who started fifth, dropped to seventh on the first lap and then had a high-speed spin at Becketts on lap five.

He dropped to 18th and was later forced to retire the car, and will start from the back on Sunday.