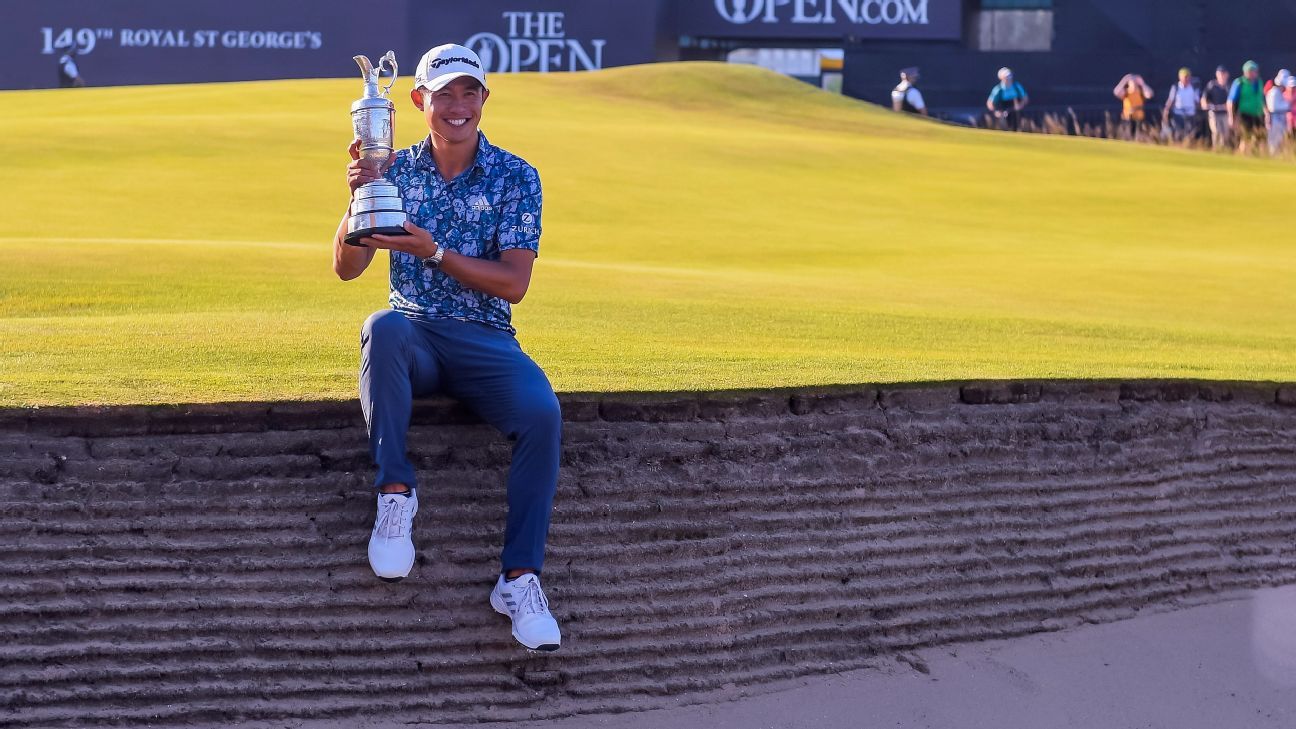 SANDWICH, England — He waved to the crowd, clapped his show of appreciation and then stepped to the microphone like he’s been giving speeches for years. Collin Morikawa might have called it the “British Open,” but he nonetheless handled the ceremony as coolly as he did Royal St. George’s.

Morikawa is just 24 years old but plays, acts and talks like he’s been around for decades. Competing in his first Open, he won it — a feat accomplished just twice previously in the last 25 years.

By playing the final round Sunday without a bogey and several times making clutch putts, it was Morikawa hoisting the Claret Jug on a sun-splashed day near the English Channel, winning his second major championship while holding off major champions Jordan Spieth, Jon Rahm and Louis Oosthuizen.

“He’s a special kid,” said caddie, J.J. Jakovic, whose 39th birthday was acknowledged by Morikawa in his victory speech. “I’m lucky to have him. He seems like he’s been there 100 times.

“It just goes to his mental strength and his maturity. You add the freakish ball striking to his absolute cold-stone demeanor who is very comfortable in all the situations, you get someone who is very special. He seems to perform better in big spots.”

It is rare for someone to take on links golf for the first time and master it so quickly.

Ben Curtis did it here 18 years ago, winning the Open in his first attempt at any major. Before that, you have to go back to Tom Watson in 1975, who won the first of his five Claret Jugs at Carnoustie in his initial attempt.

Watson has often said that even while winning The Open, he had to learn to embrace the style of golf.

“I won two Open Championships the first three years I played not particularly liking links style golf,” Watson said several years ago. “I had a mental turning point in 1979 at Royal Lytham & St. Anne’s. I was criticizing the golf course rather than playing the golf course. I didn’t like that attitude. It was a lousy attitude to have if you’re going to try and win a golf tournament. I finally had a good talk with myself, and I started playing the golf course the way it should be played. I kind of got with it after that. I didn’t want to go out with a negative attitude about playing the courses.”

The only adjustment Morikawa needed was to his irons. Last week, getting his first taste of links golf at the Scottish Open, he found difficulty in getting a clean strike with his short irons.

So he changed out the 7-, 8- and 9-irons and immediately found improvement. He also wasn’t afraid to make a putting change on the eve of the tournament. His realized his claw putting grip was not effective on longer putts, because the fescue putting surfaces at Royal St. George’s are much slower than what he was accustomed to putting on at PGA Tour events in the United States.

Morikawa went conventional on longer putts and the results were stunning. He seemed to make every big putt he needed. He made eight birdies over his last 31 holes and did not card a bogey.

“So you have to be precise about everything, That’s how I looked at it — as a challenge.”

The big shift in the tournament came Sunday when Morikawa made his first birdie of the day at the par-5 seventh hole. At the same hole, Oosthuizen made a bogey. The lead was two.

Nobody, including Spieth, who also shot 66, could ever catch him.

Morikawa wouldn’t let them. He rolled in a nice birdie putt at the 14th, saved a great par at the 15th when it appeared things could get tight. At the par-4 17th, Morikawa chased a little 125-yard wedge shot onto the green, the perfect links-style approach that many take years to learn.

For the week, Morikawa made just four bogeys. He hit the ball like Jack Nicklaus and putted like Tiger Woods. And he became the first male golfer ever to win two major championships in his debut appearance in each. He won the PGA Championship the first time he played that.

Jakovic, his caddie, explained Morikawa’s ball-striking ability in simple terms: his rate of dispersion is simply smaller than other players. He hits a 6-iron as accurately as others hit a 9-iron. Therefore any length he might give up off the tee is not as much of a disadvantage.

“He swings the club beautifully, gets it in positions that make it very, very difficult to not start the ball online. So therefore, he’s going to be very consistent tee to green,” Spieth said. “Clearly, with the shots he’s hit and the putts he’s holed, he’s not afraid of high-pressure situations and winning a major championship.”

In the past 11 months, due to the coronavirus pandemic, there have been seven major championships, a Players Championship and two World Golf Championship events. Morikawa won three of those — the PGA, The Open and a WGC event — upping his PGA Tour total to five in just more than two years.

So far, the ratio is pretty good. While playing college golf at Cal, Morikawa won five of his 48 tournaments. So far as a pro, he’s won five of 50, plus two of eight major championships with two other top-10 finishes.

Morikawa is making it look normal. He was calm in victory, then at ease in talking about it to the thousands who lined the 18th hole grandstands, remarking that the largest golf crowds on hand since the start of the pandemic were some of the best fans he’s seen or heard.

But Morikawa was so endearing in victory, he gets a pass.

What will be remembered far longer is that his name is engraved on the Claret Jug.

An ace to the NL East? Two star catchers on the move? Eight trades we want to see at the winter meetings
Dutch Grand Prix: Formula 1 extends contract until 2025
Wonderboy still has it, but should he jump right back into the title picture?
“We Need To Think About How To Bat Against…”: Rohit Sharma On Defeat Against Bangladesh In 1st ODI
Ten Hag on Ronaldo: ‘He’s gone, it’s the past’