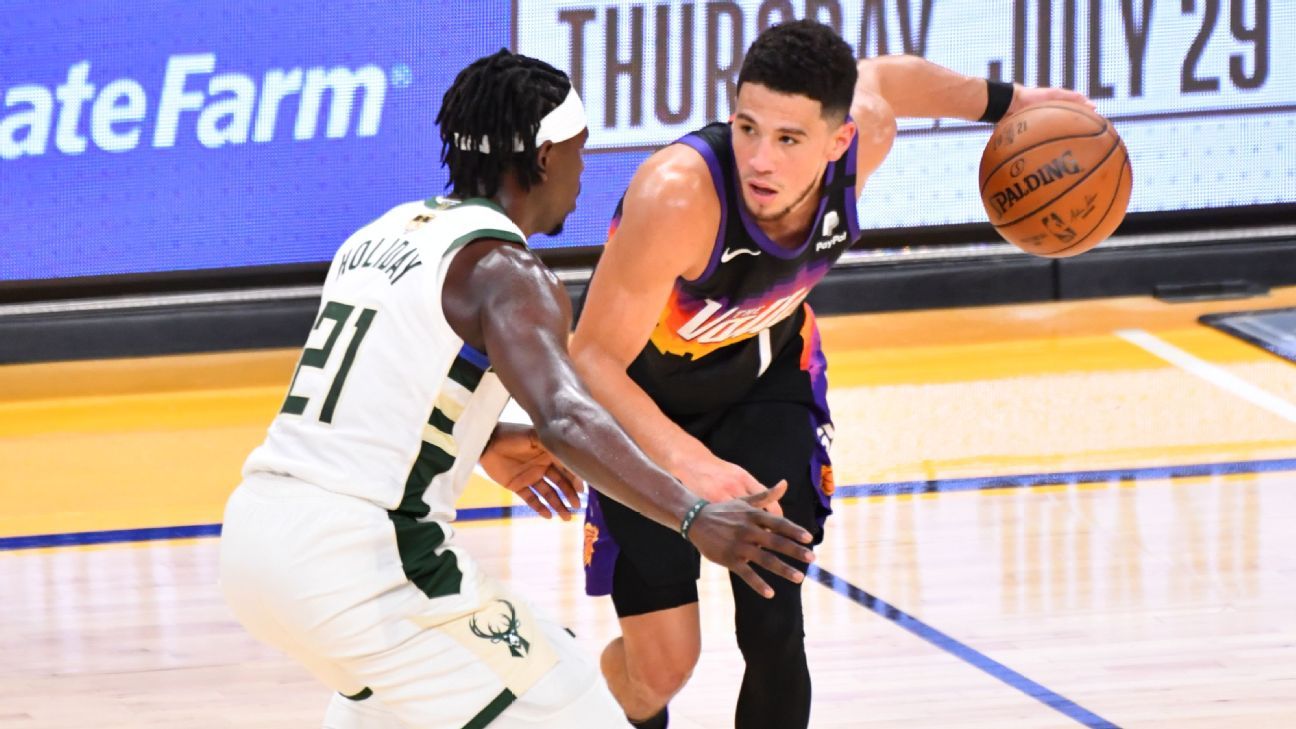 PHOENIX — As Suns star Devin Booker drove into the lane inside the final 30 seconds of Game 5 of the NBA Finals on Saturday night, it felt like it was about to be a storybook moment. The Suns were trailing by one, and Booker — who had already hit 40 points for a second straight game — looked ready to push Phoenix back into the lead.

But then, out of nowhere, Jrue Holiday appeared.

“I was just trying to score the ball,” Booker said. “[Holiday] was behind me. I turned and he was right there.”

And, as Booker spun back toward the middle of the court, Holiday got his hands on the ball, popped it up in the air and caught it.

“I guess I was just in the right place at the right time,” Holiday said.

Then, after taking four dribbles and moving into the frontcourt, he lofted a picture-perfect alley-oop pass to a streaking Giannis Antetokounmpo at the rim for an emphatic dunk plus a foul.

“The pass was all about trust,” Antetokounmpo said. “Obviously, he could have pulled the ball out, let the clock run and get a good shot. But he trusted me, threw the ball out there, and we were able to get a bucket.”

Because he did, the Bucks had gone from being on the ropes to in control of the NBA Finals in a span of less than four seconds. And, a few moments later, Milwaukee emerged with a 123-119 victory over Phoenix, pushing the Bucks to within one win of their first NBA title in a half-century.

“Going home to our fans, going home to Milwaukee is a great opportunity for us,” Bucks coach Mike Budenholzer said. “But you have to go out and play. It’s at this point, you could feel it tonight, the high-level basketball on both sides of it.

When the Milwaukee Bucks sent a bushel of draft picks to the New Orleans Pelicans for Holiday in the offseason, he was seen as the missing piece that would finally allow Milwaukee to find the postseason breakthrough it had been waiting for.

Saturday night, that was exactly what Holiday proved to be. He bounced back from a dreadful start to the series offensively with 27 points and 13 assists and continued to be a terror defensively, picking Booker’s pocket not only on that play late in the fourth quarter, but also midway through the third, when he followed by burying a 3-pointer on the left wing as part of a Milwaukee run that broke the game open.

It was a complete, two-way performance from Holiday, long considered one of the NBA’s best two-way guards, and a validation of Milwaukee’s decision to go all-in on him after his predecessor, Eric Bledsoe, had failed in these exact sorts of situations as the Bucks crashed out of the playoffs as the East’s top seed each of the past two seasons.

“I saw it in Portland, when he was in New Orleans and we got swept in the first round,” Bucks guard Pat Connaughton said. “Just the way he defends on a nightly basis and the way that he’s able to do it in different ways. He’s physical, he’s quick, he’s strong. He’s got a lot of things to him. And he’s got quick hands.

“First Team All-Defense play. It was a Defensive Player of the Year [play]. It just kind of shows we’re built on defense. The last two games, we’ve had a big defensive stop to kind of push us over the hump, and they have been made by a guy who is First Team All-Defense.”

Entering Game 5, however, a Holiday offensive explosion didn’t appear to be in the cards. His shooting had been a talking point throughout the series, thanks to him shooting 34.8 percent through the first four games, including a 4-for-20 performance in Game 4.

Still, Holiday said that isn’t anything he’ll carry with him into the next game.

“Doesn’t really cross my mind,” he said. “I feel like at the end of the day, whatever I can do to help my team is most important. I went 4-for-20 the game before and we still won, and I know I can do other things to affect the game. I know when my shot is going and I’m trying to make plays for others, it is definitely an added bonus.

But after Milwaukee managed to pull out Game 4, thanks to some incredible heroics from Antetokounmpo and Khris Middleton down the stretch, Antetokounmpo said he believed in Holiday and trusted him to make the right plays going forward to lead the Bucks to victories.

Holiday repaid that confidence — and then some — with his performance Saturday night.

He opened the game with a mid-range jumper that hit nothing but net, a good sign for his confidence after his clunker in Game 4. But after a couple of quick baskets, Holiday exited the game with two fouls with 6:42 to go in the first quarter.

At that point, with the Bucks trailing by 5, Jeff Teague checked into the game. The Suns repeatedly targeted him and went on a 21-10 run to take a 16-point lead after one.

But then, with Antetokounmpo on the bench after playing the entire first quarter, Holiday proceeded to take over. As Milwaukee stormed back into the game, outscoring Phoenix 43-24 to take the lead going into halftime, it was Holiday who willed the Bucks back into it. He scored 14 points while going 6-for-7 from the field in the second quarter alone.

“I thought there was a couple stops and he was able to get to some good spots,” Budenholzer said. “Brook [Lopez] and Bobby [Portis] screening for him in transition. It starts with our defense. I thought that group played really well defensively. [Pat] Connaughton hit some big 3s in that stretch.

“They made every shot in the first quarter. We felt like it could balance out.”

It did — and then some — across the second and third quarters. The Bucks shot 32-for-45 overall and 10-for-17 from 3-point range on their way to outscoring the Suns 79-53, completely flipping the game in their favor, even as Booker was doing his best to match Milwaukee’s scoring by himself.

For as good as Holiday was, he wasn’t alone. After the home team had won each of the first four games of this series, the Bucks came alive on the road in Game 5 to break that trend. Middleton had 32 points, nine rebounds and six assists in 41 minutes. Antetokounmpo had another routinely dominant performance, finishing with 32 points, nine rebounds and six assists. And Bobby Portis and Pat Connaughton chipped in a combined 23 points and six 3-pointers off the bench.

“It makes everything more balanced and makes life easier for everybody,” Middleton said of the team-wide offensive attack. “Knowing that we play together and we have everybody clicking on all cylinders, we’re tough to guard.

“Obviously on defense, we can click. We can switch and we know how to have each other’s back. But when we are all playing well, we’re one of the best teams, for sure.”

Even with all of that, however, the Suns didn’t go down without a fight. The Bucks led by 10 with 3:25 remaining and eight with 2:23 to go, only for the Suns to then rattle off seven straight points, while Middleton missed a pair of jumpers, Holiday missed another and Antetokounmpo bricked a pair of free throws.

All of that set the Suns up with a chance to win the game when Booker brought it over halfcourt with 30 seconds to go. Instead, it turned into the moment Holiday proved he was worth everything the Bucks gave up to go get him.

Now, he and the Bucks have to do it one more time to win the title.

“I feel like now, you’ve got to give it your all,” Holiday said. “We’re literally coming down to the last game, game or two.

“At this point, there’s no excuses.”

Luka praises Tatum-Brown as ‘best duo’ in NBA
Follow live: Mbappe, France can qualify for round of 16 with win over Denmark
New Zealand vs India: New Zealand vs India, 2022/23 Live Cricket Score, Live Score Of Today’s Match on NDTV Sports
‘It’s joy’: NC State beats rival No. 17 UNC in 2OT
30 MLB teams, one big move: What your favorite squad should do to win the winter