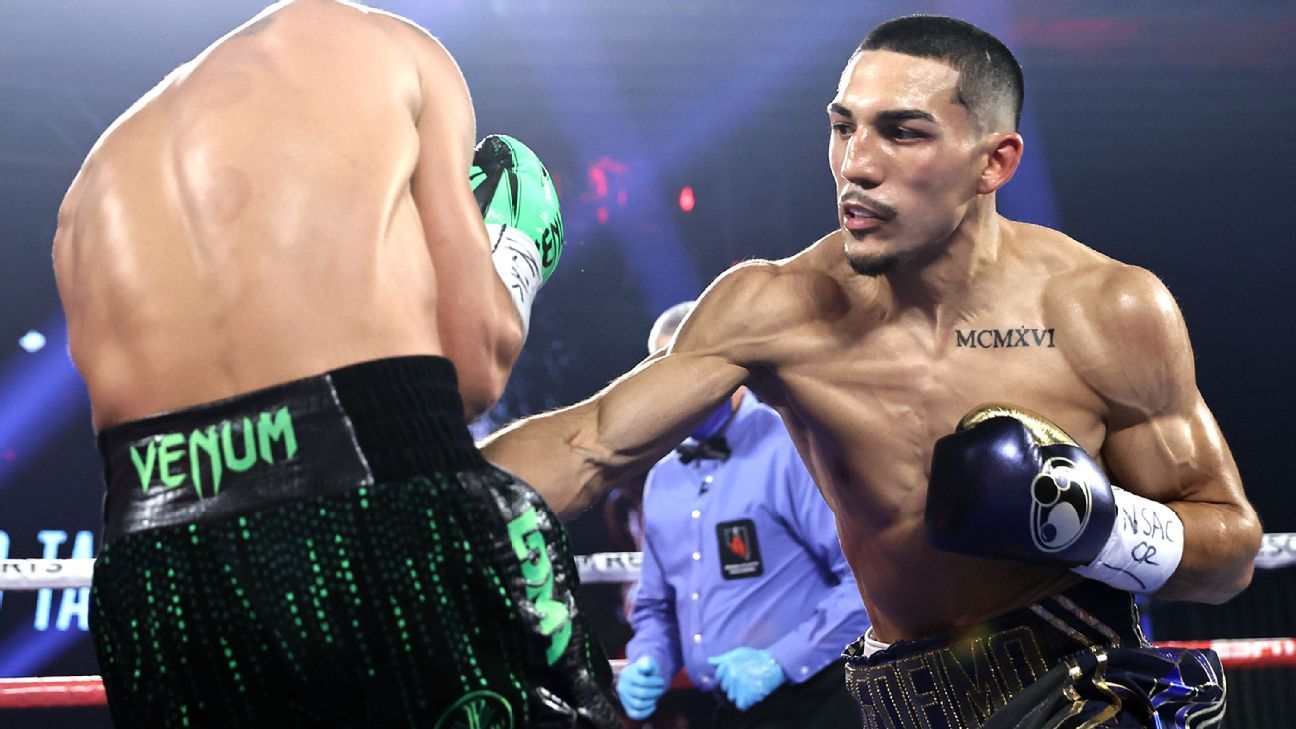 In a parallel universe, we’d be days away from the high-stakes heavyweight title trilogy fight between Tyson Fury and Deontay Wilder that was originally scheduled to take place Saturday. Unfortunately for fight fans looking forward to another big heavyweight clash, Fury contracted COVID-19, and that fight appears destined to take place in October, leaving a big hole in the boxing schedule.

COVID-19 seemingly shifted another big title fight to October, as undisputed lightweight champion Teofimo Lopez also tested positive and had his title defense against George Kambosos postponed. As fight promoters seek to recoup some of their losses from the last-minute cancellation in Miami, will they be able to lock down Lopez to fight in their intended new destination of Australia?

Jermell Charlo and Brian Castano did get to fight, but with a split-decision draw, their junior middleweight unification bout didn’t crown an undisputed champion as hoped. Will they run it right back?

Meanwhile, Joe Joyce and Carlos Takam square off in a WBC heavyweight title eliminator on Saturday in London. With the titles currently tied up between Fury-Wilder 3 and Anthony Joshua vs. Oleksandr Usyk, would a Takam win be enough to put him at the front of the line once the picture gets a little bit clearer in the fall?

Finally, we’re six weeks out from the next chapter of the Paul brothers boxing saga, as Jake Paul takes on former UFC welterweight champion Tyron Woodley in a boxing ring. If Woodley can finally put the brakes on Jake Paul’s string of wins over non-boxers, could he stick around the sport for more showcase opportunities?

Our panel, which features Mike Coppinger, Ben Baby, Marc Raimondi and Nick Parkinson, digs into the biggest topics of the day to separate what’s real from what’s not.

Coppinger: Not real. Last week I reported that Triller is planning the rescheduled bout for Oct. 17 in Sydney, Australia, which would make it a hometown fight for the title challenger. The problem is that Lopez isn’t on board. At all. Teofimo isn’t interested in traveling overseas, nor is he interested in the 14-day quarantine travelers face. It’s especially an issue, his manager, David McWater, said, when the fighter is cutting weight, a difficult chore for someone Lopez’s size. Lopez also doesn’t want to wait until mid-October to fight when the original rescheduled date was Aug. 14.

McWater said Lopez would rather relinquish his 135-pound title than make the trip down under. In the background, Lopez has retained longtime boxing attorney Pat English to convince the IBF that the title fight is overdue.

The 23-year-old is in the midst of a long-term deal with Top Rank, a pact he renegotiated last month amid issues with his promoter. That followed Triller snatching up the rights to his mandatory title defense against Kambosos at an IBF purse bid in February.

The fight was scheduled for June 19 in Miami, but Lopez tested positive for COVID-19 and the bout was postponed just four days out from fight night. The virus sidelined Lopez for a few weeks, and he still has some minor lingering effects, but as of Monday he had tested negative for the coronavirus 22 days straight and has resumed training.

Triller lost nearly $5 million on the event after travel expenses, marketing costs, etc. To recoup the money, Triller’s Ryan Kavanaugh wants the fight in Australia, a boxing-starved country where the citizens support their own. Just look at the packed stadium that saw Jeff Horn’s controversial upset win over Manny Pacquiao.

But McWater, on behalf of Lopez, has been steadfast: The fight isn’t happening in Australia. Kavanaugh has planted his feet in the ground, too. It doesn’t appear either party will give in. Lopez is due to earn a career-high payday of nearly $4 million, so he would be losing more than just his status as undisputed lightweight champion.

Meanwhile, sources told ESPN that Top Rank is discussing the long-awaited rematch between Lopez and Vasiliy Lomachenko. Lopez outpointed Loma when they met in October. If Lopez-Loma 2 replaces Lopez-Kambosos, I’m sure boxing fans will be just fine.

In that scenario, Kambosos, ESPN’s No. 9 lightweight, will move on and face Isaac Cruz for the vacant belt. The 23-year-old from Mexico has slowly made a name for himself with his relentless pressure style.

Surely, fans would rather see two evenly matched, excellent matchups in Lopez-Loma 2 and Kambosos-Cruz. This might be the rare time when the shenanigans of the boxing industry formalize a more favorable scenario.

Of course, this is simply that at the moment — a scenario. For now, Lopez and his lawyer will try to convince Triller to promote the fight at an earlier date in the U.S. Don’t bet on that outcome.

There will be a Jermell Charlo-Brian Castano rematch

Baby: Real. No other fight for Jermell Charlo or Brian Castano even seems remotely logical. A rematch makes too much sense — especially for Charlo, and not just because of the disputed draw.

Despite his status as a legitimate three-organization champion, Charlo’s credentials lacked the weight required to truly be considered one of boxing’s top pound-for-pound fighters. One of the big issues was that it was difficult to truly evaluate the strength of the 154-pound division, in which ESPN ranked Charlo as the No. 1 fighter.

Castano was easily the best opponent Charlo has faced during his title run, including Tony Harrison, who beat Charlo in 2018 before Charlo won the WBC title back from Harrison with a TKO win in the rematch. Charlo and Castano were boxing at such a high level that referee Hector Afu rarely intervened throughout the 12-round bout.

Excluding Nelson Vazquez’s horrific scorecard, Charlo-Castano was a fantastic performance that capped a very strong Showtime card. Each man produced the type of fight that only increases their respective stock and raises the stakes for a potential rematch.

Sure, Charlo and Castano can go their separate ways and look for other opponents. But after Saturday night, nothing but a win over the other will produce the type of acclaim and recognition each of them wants.

Parkinson: Real … provided it comes after another title unification fight. The world’s four best heavyweights meet each other in their next fights, as we get Tyson Fury-Deontay Wilder 3 and Anthony Joshua-Oleksandr Usyk. That’s where we’ve landed after delays and U-turns prevented rival champions Fury and Joshua from fighting for all of the belts this summer.

Our faith in getting a four-belt world heavyweight title fight in 2021 has been knocked by the letdowns and postponements over the past year, but if promoters can make it work, then Joyce will have to wait until 2022 for his first world title shot (providing he beats Carlos Takam, who was stopped by Joshua four years ago). Joyce, who will become WBO mandatory challenger if he beats Takam, is already among the chasing pack trying to earn a shot at one of the four titles (the others being Andy Ruiz Jr., Luis Ortiz, Joseph Parker and Charles Martin), and he arguably had a better win in his most recent fight than the other leading contenders.

Others at the top of the governing bodies’ rankings may have all fought for world titles — unlike Joyce — and the Londoner has had only 12 professional fights since winning silver at the Olympics as an amateur. But Joyce has made impressive and convincing progress to world title contention, stopping 11 of his 12 opponents, including a 10th-round knockout of fellow Englishman Daniel Dubois in his most impressive performance.

A clash against Joshua, who holds the WBO belt along with the IBF and WBA titles, would be intriguing. The pair are former sparring partners, and outside of Fury, Wilder or Usyk, and perhaps Dillian Whyte, fighting Joyce would be the biggest fight available to Joshua.

Jake Paul and Tyron Woodley agree that the loser of their bout has to get a tattoo with the winner’s name on it.

Woodley can have a legit boxing career after Paul fight

Raimondi: Last week at a news conference in Los Angeles, Tyron Woodley made some headlines when he said that his boxing match with Jake Paul on Aug. 29 won’t be a one-off. Woodley said he plans on boxing in the future. His exact words were: “I’m in boxing.” He didn’t completely shut the door on MMA — he said he would do both — but it sounded like his focus at this point was on boxing. Of course, Woodley’s future in boxing will be determined by how well he does against Paul, the YouTube star-turned-prizefighter, later this summer. However, I’m going to say “real” on this statement.

Here’s one key factor: Woodley was not talking as much about a long future in boxing when he first started training, but it seems like a few months in the gym with Pedro Diaz and Eric Brown in Florida have given him some confidence. He has clearly been getting positive feedback not only from Diaz and Brown, but also from Floyd Mayweather Jr., whom Woodley has also been training with a bit. I’d guess that Woodley feels good with his training so far — he also mentioned how lean he was getting after putting in the rounds — and his internal outlook is bright.

Woodley said last week that he wasn’t happy in MMA for the past five years, which was another interesting statement, since he was the UFC welterweight champion during that time period. Woodley lost four in a row to finish his UFC run, a stretch that began with Woodley dropping the title to Kamaru Usman at UFC 235 in March 2019. Woodley’s contract ran out with a loss to Vicente Luque at UFC 260 in March. Now, Woodley will face Paul, and after that he said he would consider a fight with a boxing “OG,” someone like Oscar De La Hoya. And then, Woodley said, he would consider taking on a top boxer.

Expectations must be tempered, of course. Woodley is 39 years old and has looked gun-shy in recent fights. That does not bode well for boxing, where Woodley can’t use his All-American-caliber wrestling. But Woodley has always been an outstanding athlete and one of the savviest fighters in MMA when it comes to strategy. Those two things could surely translate to boxing. And if Woodley, after getting in months of boxing training, thinks he has a real future in the squared circle, I’d tend to believe him. Beating Paul — especially in spectacular fashion — would be the perfect springboard to more huge boxing bouts.