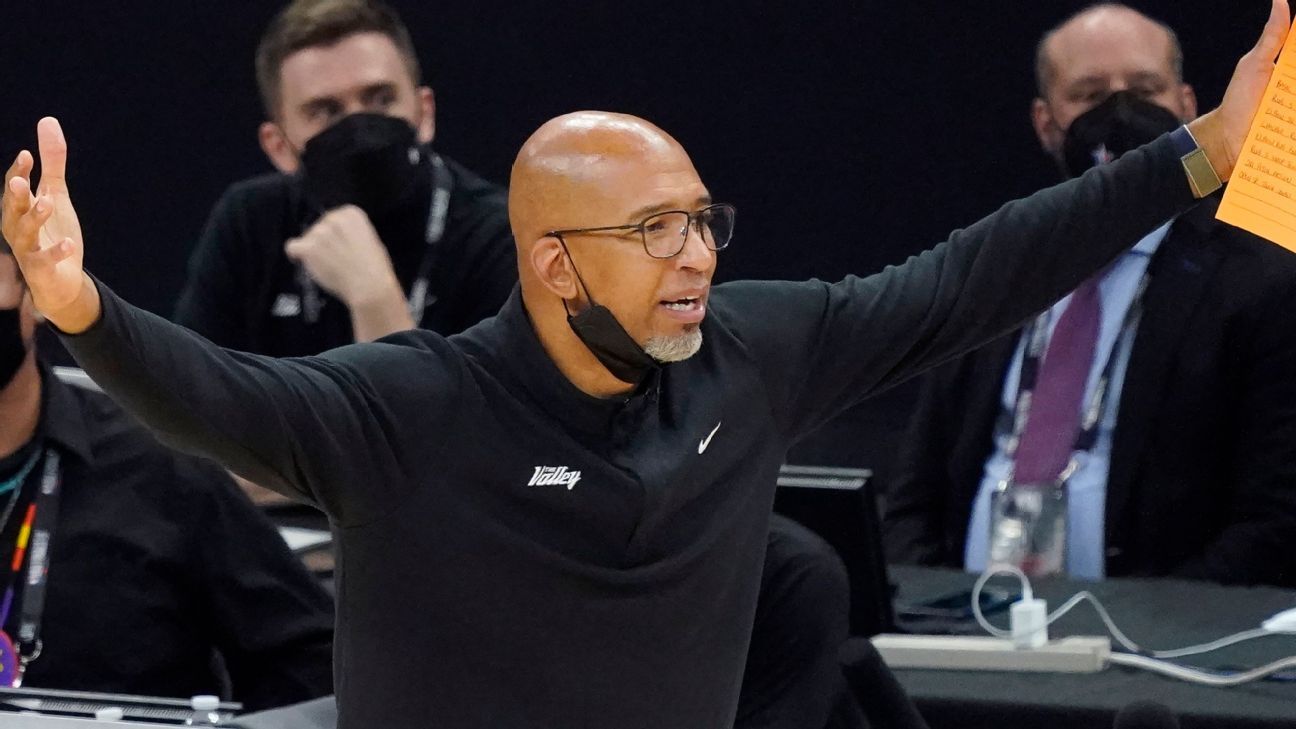 MILWAUKEE — Before the Phoenix Suns even arrived in Milwaukee for the biggest game of their lives in Tuesday’s Game 6 of the NBA Finals (9 p.m. ET, ABC), their coach could sense his team’s hangover had cleared from Saturday’s tough loss in Game 5.

“When we got on the plane, the guys had the same look in their eyes,” Monty Williams said Monday. “When I came down this morning for meetings, guys were down there talking, having breakfast. It was pretty cool to watch.

Being the best road team in the league during the regular season hasn’t translated to success for the Suns this series, as they have dropped both games at Fiserv Forum thus far.

However, back in Games 3 and 4, the Suns were playing with house money, having run out to a 2-0 lead. The circumstances are far different now, with Phoenix needing a win to extend its season and have a chance to chase the championship in Game 7 at the newly renamed Footprint Center.

“Throughout this whole playoff run, this is our first elimination game,” Chris Paul said. “So it’s for real. It’s no looking back now. We got to come out, be ready to play and it’s either win or go home.”

Game 5 provided plenty of disappointment for the Suns, from squandering a 16-point lead in the first quarter to a costly turnover from Devin Booker with less than 20 seconds to go when Phoenix was down one with a chance to go ahead.

But there’s nothing the Suns can do now about that loss or the two that preceded it. The challenge ahead is winning one game to stay alive.

“It’s definitely exciting,” Paul said. “Something that Coach and everybody has been saying: If you went to the beginning of the season and said we had a chance to be where we are right now, would you take it? Absolutely. Absolutely. And we get a chance to determine the outcome.

“It’s not like the game is going to be simulated or somebody else got to play. We get a chance. We control our own destiny. So I think that’s the exciting part about it.”

In the 2-2-1-1-1 Finals formats, teams that fall down 3-2 in the series are just 4-21 (4-22 including the 2020 bubble, which didn’t involve travel between games). Considering the history, the Milwaukee Bucks are massive favorites at this point.

Yet Booker said that what the Suns are trying to accomplish has nothing to do with the 2016 Cleveland Cavaliers, the 1978 Washington Bullets or the 1969 and 1962 Boston Celtics teams that previously beat the odds in this spot.

“It’s kind of hard to compare and contrast what LeBron [James] did in the Finals in whatever year, you know what I’m saying?” Booker quipped. “We have a group that’s us, and that’s how we keep it. We’re trying to figure it out right now, how we’re going to go out there and do it. We know it’s possible with the group that we have and what we have leaned on for most of the season.”

The Suns were able to generate some momentum late in Game 5, using a 12-3 over a three-minute span to cut the Bucks’ edge down to one in the final minute, which is something Williams says his players have kept with them as they approach Tuesday’s do-or-die affair.

“Saw a lot of resilience and a no-quit attitude,” Williams said. “For us to be able to cut it to one point, you know, that was the thing that stuck out to me and gives our staff and team a lot of confidence as we go into this Game 6.”

This is the first time the Suns have trailed in the playoffs since being down 2-1 to the Los Angeles Lakers in the first round. From there, they won nine in a row, catapulting their run toward the Western Conference crown.

Williams was asked what he has seen from his team when it is the one coming from behind.

“I don’t think it’s been anything different; I just think it’s been more,” he said. “You know what I’m saying? The focus, the determination, more questions about, ‘Hey, this situation, this environment, this concept …’ It’s just — there’s just been more. Our guys have always wanted it, but I think when you’re in these moments like this, this is different. This is different than the first time against the Lakers, where it was just 2-1. This is it.”

“It’s not the best situation and we all know that, but we’re in the Finals,” Williams said. “This is not the beginning of the season where you lose three or four in a row. We’re in the Finals. We got here for a reason, and our guys can glean confidence from that.”

“It Was Quite Unfair”: Pakistan Star On Being Left Out Of National Team
Untold stories of the Kelce brothers ahead of Super Bowl LVII
Brazil’s Klier Junior given 12-month doping ban
NBA suspends Brooks, fines Mitchell for dust-up
Atsu rescued after Turkey earthquake – club VP