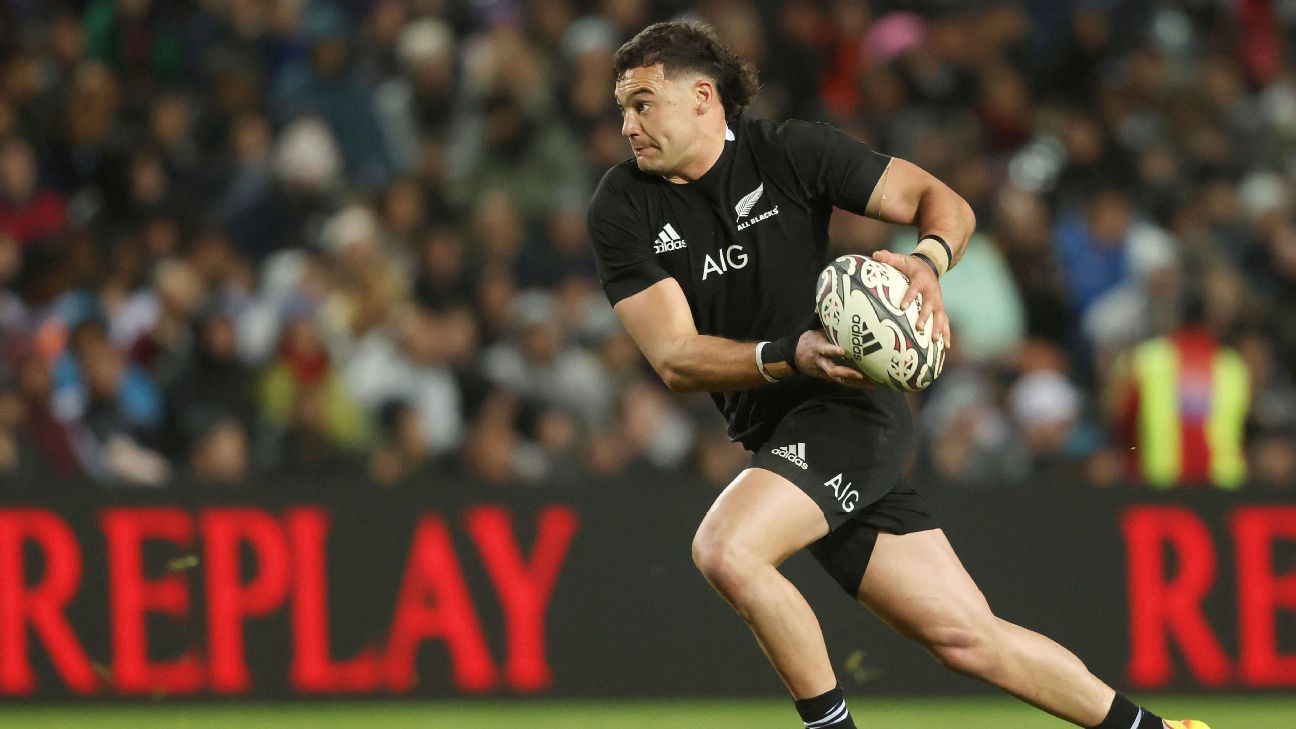 By the end of July, after three Tests against Pacific Island opposition, the All Blacks projected widespread satisfaction with their start to the season.

All Blacks coach Ian Foster rotated all but one of his 36-man squad – 21-year-old Chiefs lock Tupou Vaa’i not used – to build depth and gain a clear picture of his first-choice side.

We’ll come to those who cemented their spots soon, but from a performance perspective the discerning New Zealand rugby public won’t be convinced unless the Bledisloe Cup is locked away for a 19th straight year.

The manner in which the Wallabies rallied with 14 men to secure their dramatic 2-1 series win over France is sure to inject confidence through Dave Renie’s young brigade. Yet they, too, would do well to remain grounded given France were missing a host of influential figures who featured in the Top 14 final – halves Antoine Dupont, Romain Ntamack and fullback Brice Dulin among them.

In short, a cloud of uncertainty gathers over the opening Bledisloe on Aug. 7 at Eden Park. Both teams are in much better shape than coming in cold following COVID-19 enforced lockdowns last October for their 16-all draw in Wellington. But a true gauge of the trans-Tasman Test landscape will be revealed at Eden Park.

The All Blacks are never at their best in July. They generally take two, three Tests to absorb game plans, reconnect combinations and shake off Super Rugby habits. That theme proved true this month, too.

The opening 102-0 romp over Tonga at a half full Mt Smart Stadium can be set aside as a non-event; a terrible look for the global game.

Fiji, on the back of two training runs after emerging from two-weeks quarantine, seriously exposed the All Blacks at the breakdown in the ultimately comfortable 57-23 victory in Dunedin.

Seven days later the All Blacks remedied many of those issues in their largely clinical 60-13 win in Hamilton that comprised nine tries. While Foster was pleased, a healthy dose of skepticism remains until the Wallabies arrive.

“The way we’ve finished we’ve done some really clinical work today that shows when we get the intent right and we improve the quality of our ball carrying we can actually get the speed of ball we want,” Foster said following the third Test win.

“There’s still a little way to go but, overall, when I look at the three Tests, I’m pretty delighted with where we’re at right now.”

Foster eased Brodie Retallick and Beauden Barrett back into the Test arena from Japan and, likewise, waited until the final Test before returning Anton Lienert-Brown and Ardie Savea from their respective injuries.

All four experienced figures displayed elements of rust but will be better for the hit-outs.

Barrett has made no secret of the desire to shelve his role as dual playmaking fullback and return permanently to first-five where he must now attempt to unseat Richie Mo’unga.

On evidence thus far, Barrett is yet to achieve that aim. Multiple blows to the face did not help his cause but as Foster noted, after handing Barrett his third Test start at No 10 in the past two years, he didn’t challenge the line enough.

Mo’unga, by contrast, made the most of a vastly-improved platform to have a hand in four tries in the second Test against Fiji; a performance that should see him retain the starting role for the Wallabies.

From the front-row to loose forwards and the back three, competition is prevalent throughout the wider All Blacks squad.

David Havili was the big mover of the Pacific series. Four years ago, Havili played his last Test as a fullback/wing. Having since endured injury setbacks and emergency bowel surgery that threatened his career, Havili’s rise following a positional switch at the Crusaders this season is testament to his perseverance and character.

With direct running and silky offloads Havili locked his presence in at second-five alongside Lienert-Brown in the All Blacks preferred midfield. That they have only started one Test together, though, speaks to the high turnover and challenges the All Blacks have faced in settling on a midfield pairing. It’s certainly a far cry from the Ma’a Nonu-Conrad Smith era.

The back three is beginning to take shape, too, with Sevu Reece carrying his strong Super Rugby form through to the All Blacks. Reece started one Test on each wing against his Fijian countrymen, claiming a hat trick from the left edge in Hamilton.

Rieko Ioane and Will Jordan are expected to contest the other wing.

Damian McKenzie has been linked to a Japanese sabbatical next season but, for now at least, his superior playmaking skills – and a highlight reel try-saving tackle after Ben Volavola’s intercept – is holding off Jordie Barrett for the starting fullback role.

Loose forward is another highly contestable area with Crusaders rookie Ethan Blackadder stating his case and Blues No. 8 Hoskins Sotutu failing to press his in Dunedin.

Blues openside Dalton Papalii has been hampered by a calf injury that restricted him to one appearance against Tonga. At this stage, it seems Savea, Akira Ioane and Luke Jacobson will form a complementary loose trio after impressing as a unit in Hamilton.

“Aki was strong with his ball carrying around the edges of the rucks he got us momentum at crucial parts of the game,” All Blacks forwards coach John Plumtree said. “Luke Jacobson was busy in all parts – great in the lineout, applying pressure defensively and then he did his fair share of carrying and tackling as well.

“Ardie it was his first game back for a while and he was rusty in some parts but when he got that ball in his hands he showed what he can do and he put in a couple of great hits as well so it was good to have him in there.”

After an unconvincing win in the opening Test against Fiji in Dunedin there is plenty to like about the way the All Blacks responded. No matter who they select, their starting team won’t lack power or skill and there is depth bagging down the door.

Yet the Bledisloe Cup series will be welcomed for the true picture it will reveal.