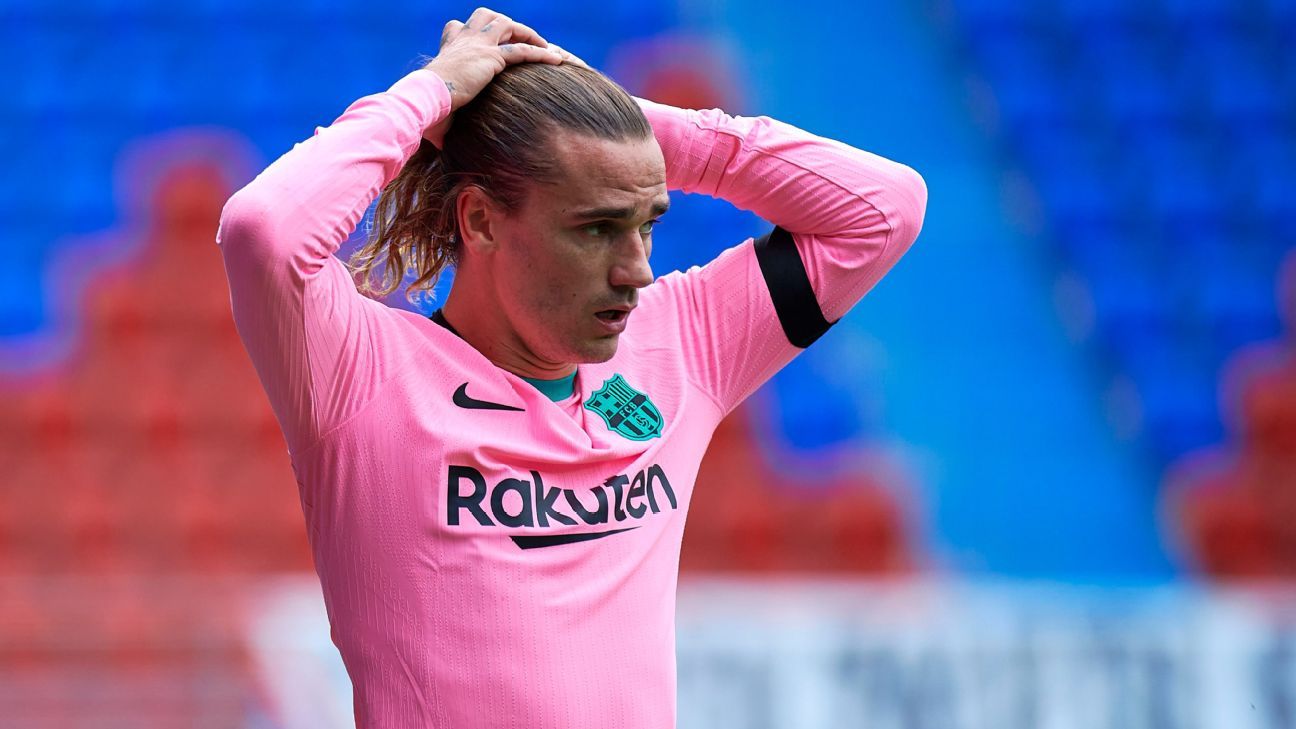 OK, so Atletico may not win the league next season, and they may not even get the deal done — in fact, it looks pretty difficult right now — but FC Barcelona really are talking to them this summer about allowing Antoine Griezmann to go back to the Wanda Metropolitano and for nothing. And doing this two years after paying €125m for him, which in turn was a year after he had very publicly turned them down.

Not just allowing him to go back, in fact: obliging him to.

On Monday afternoon, Barcelona opened discussions about doing a swap deal for midfielder Saul Niguez — although officially they would end up being two separate deals. It may not happen. Barcelona do not want to cover any of Griezmann’s salary, understood to be in the region of €20m. Atletico do not want the deal to cost them, and have intimated that they’re not so bothered: they could walk away any time, leaving him and them stuck.

Which may be a tactic, of course. It probably is. But that it has come to this.

That Barcelona have become so desperate, in such dire financial circumstances, that they’re trying to force Griezmann to the door, aware now that it’s almost impossible for them to keep him and Messi.

That after everything Griezmann has done, everything he has been and still could be, there is not a queue of clubs building outside, all desperate to get him, huge wads of cash waving at Barcelona.

That Atletico stand alone, ready to twist Barcelona’s arm or walk away.

And that Griezmann would go back, happily. Like others before him, incidentally. It’s funny how it goes.

Well, sort of happily. And it is not like the choice would be his alone. It is not that Griezmann wants to leave Barcelona for Atletico, either; it is that if he has to leave Barcelona, Atletico is an attractive alternative. It’s a club he knows and a manager (Diego Simeone) who backs him; even Profe Ortega, the fitness coach who likes to see the sweat and vomit flow freely from his players, doesn’t scare him. In fact, the way things have been the last couple of years, he might well welcome that work.

But Griezmann did not seek this solution, Barcelona did. If it really is a solution.

For all the doubts around Griezmann over the past couple of years at Camp Nou — that lingering feeling that he never quite fit, that this was never quite his place, that in truth he probably shouldn’t have come in the first place and that he cost too much — the reasons that Barcelona are so keen to move him on are not so much footballing as financial.

Right now, they can’t afford to pay their players: savings have to be made, sales secured. Griezmann may not be the highest earner at the club or even in the top three, but his departure would clear around €20m off their wage bill. Just as importantly, there are still almost €80m still to be amortized on his contract. His departure would help them ease that financial pressure and at a time that — and let’s say this again — they cannot afford to pay their players and the league will not even let them sign them up.

Gab and Juls discuss the possibility of a swap deal between Antoine Griezmann and Saul Niguez.

Stuck with a squad high on salaries and low on the desire to depart, Griezmann is one of the few players they can move. And yet even he doesn’t have his pick of clubs, even at a time when it looks very much like he would turn up for free. Is there seriously no-one else out there that sees what a bargain this could be?

It’s curious. When he joined Barcelona two years ago, there may have been just one attacking player in the world that did what he did. There was a reason that his transfer fee was €125m, a reason why Barcelona were prepared to go back to him even after he had rejected them the year before — live on television. Problem was, that one player was about to be on the same team as him.

Griezmann — and it’s worth saying this, too — has not been a failure at Barcelona. He has largely played pretty well and he has scored some significant goals — a significant number of goals too (35 in 99 games). Ask people at the club privately, and mostly they speak well of him. And yet it’s not quite enough; expectations for his arrival were far higher than that, and something was not quite right. Add to that a financial crisis and structural dysfunction, and now there are doubts. A situation too in which Griezmann is not in control of his own destiny.

He knows now that Barcelona are trying to push him out, that they have begun a process that they hope can secure their short-term future. Because, make no mistake, this is what’s in play here. It is one in which he, and Atletico, hope they may be able to secure their past, and their future too — aware that while Barcelona are pushing for his departure, desperate to get rid, theirs is the upper hand, and time on their side now. It’s no guarantee that this will happen: it is a complex deal, agreement just out of reach still.

But there is an opportunity, too.

Big money doesn’t always mean success; Barcelona know this better than most. Philippe Coutinho was, it was said, but he won the Champions League with Bayern Munich. Luis Suarez was finished, but he won the league. “Madness,” Messi called it. Now Griezmann could be on his way back again. Not everyone will welcome him, not after everything that happened, but at Atletico, they know he can play. They saw it then and now… well, now, anything can happen in football.