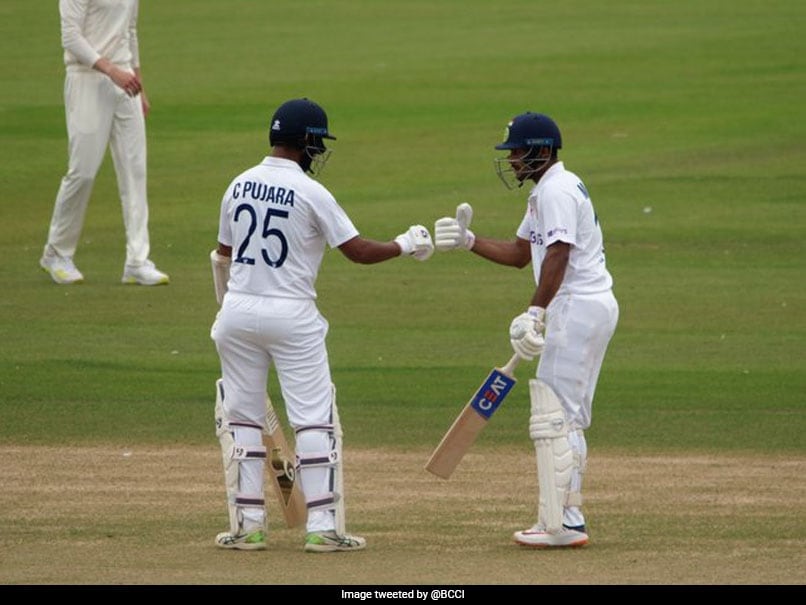 Mayank Agarwal and Hanuma Vihari spent some valuable time in the middle while Ravindra Jadeja scored his second fifty of the game on the final day of India’s warm-up match against County XI, on Thursday. After bowling out County XI for 220 on day two, Agarwal (47 off 81) and Cheteshwar Pujara (38 off 58), opened India’s second innings on day three. The duo shared an 87-run stand which ended when Agarwal charged down the wicket to off-spinner Jack Carson only to be caught at mid-on by fellow India teammate Washington Sundar.

Washington and pacer Avesh Khan, who are both set to fly back home due to injury, played for the County XI in India’s only warm up game ahead of the first Test beginning August 4.

Like Agarwal, Pujara too had the opportunity to make a big score to boost his confidence ahead of the first Test. However, he fell to the trap laid by Carson and flicked one straight to leg slip. Jadeja (51 off 77) and Vihari (43 not out off 105) then shared an 84-run stand before the southpaw retired out. Jadeja had scored 75 in the first innings.

The match did not have the same intensity as it was witnessed on the first two days with the game heading for a drab draw. Much to the opposition’s surprise, India declared soon after Jadeja completed his fifty with 33 overs left in the game.

County XI batted for 15.5 overs, scoring 31 without a loss of a wicket before the players shook hands. Earlier in the game, K L Rahul scored a sublime half century to make a statement ahead of the five Test series while Umesh Yadav looked good with the ball.

Jasprit Bumrah, who was off colour in the World Test Championship final, ended with only one wicket in the game, while Mohammad Siraj bagged a couple. Skipper Virat Kohli and Ajinkya Rahane missed the first-class game due to minor niggles.