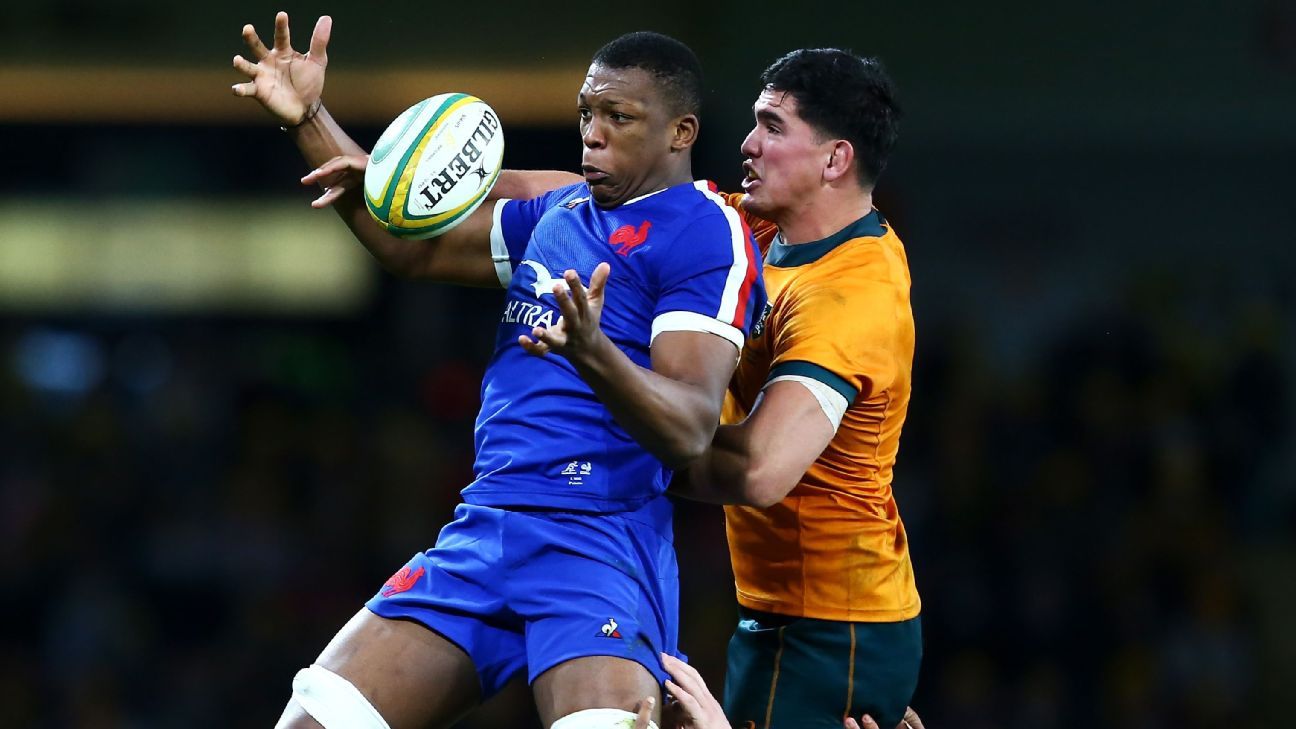 It took three attempts, but the Wallabies have their first piece of silverware under coach Dave Rennie.

The Trophée des Bicentenaires will stay in Australia’s keeping until at least the end of next year following the Wallabies dramatic 33-30 win in Brisbane last week, which secured a 2-1 series win over a gallant and, it must be remembered, understrength France outfit.

Nevertheless, the series triumph is a major milestone for Rennie as he sets the squad for far greater challenges in the coming weeks and months, and the ultimate journey to the Rugby World Cup 2023 in France.

Next up, of course, it’s the Bledisloe Cup. And challenges don’t come any tougher than the one that awaits the Wallabies at Eden Park in just over two weeks’ time.

The Wallabies were given this week off; the Brumbies players were permitted to return to Canberra while everyone else was forced to remain in Queensland. With the COVID outbreak showing no signs of slowing in NSW and a smaller, but no less concerning, rise in cases in Victoria, it might be some time before the Rebels and Waratahs players see their homes again this year.

Meanwhile, there are reports emerging in New Zealand that Prime Minister Jacinda Ardern could hit pause on quarantine-free travel with Australia completely, not just NSW and Victoria, which would present immediate problems for the Wallabies and their travel plans.

There is also the issue of Rugby Championship matches in both Sydney and Newcastle — and potentially even Canberra if the Queensland border was to close to the ACT — for Rugby Australia to consider. September might seem a way off right now, but things can change very quickly in the current environment and it won’t be a surprise to see Suncorp Stadium become the “Twickenham of Australia” in 2021.

Given the Wallabies have won nine straight at the venue, that might not be the worst thing.

The Wallabies will regroup at Sanctuary Cove on Sunday, and they will have a week’s preparation on Australian soil before flying across the ditch ahead of the opening Bledisloe Cup Test.

And there will be plenty for Rennie and the rest of his Wallabies staff to ponder.

The rotation at tighthead prop will in all likelihood continue throughout the Bledisloe Cup and into the Rugby Championship. Rennie knows exactly what he is going to get from each of Alan Alaalatoa and Taniela Tupou, and can dictate selection accordingly.

Does he go with stability and the in-tight workrate of Alaalatoa and let Tupou provide the finishing impetus, just as he did in Tests one and two against France? There are many who believe that is the best approach but so slow have the Wallabies starts been under Rennie — particularly against France when they conceded leads of 0-15, 3-15 and 0-10 — that Tupou’s propensity for line-shredding runs, powerhouse scrummaging and big tackles may be exactly what the Wallabies need from the outset.

You cannot play from behind in Auckland.

James Slipper remains a reliable and experienced option at loosehead and he will continue to be ably supported by Angus Bell off the bench. Brandon Paenga-Amosa has locked down the hooker position but concerns remain about his deputy; the Brumbies Lachie Lonergan looks a little light for Test rugby while Jordan Uelese’s lineout throwing has long been his Achilles’ heel.

Feleti Kaitu’u wasn’t sighted against France because of injury while Rennie confirmed Dave Porecki will be available during the Rugby Championship; Alex Mafi is however on the longer-term injury list. With Paenga-Amosa set to take up a deal overseas at the end of the year, Australia really needs another hooker to poke his head out from the pack.

The progress at lock, perhaps unexpectedly, makes for much better reading. The return of Matt Philip, who doesn’t appear to have missed a beat, from France was a welcome sight, so too three consistent performances from Lukhan Salakaia-Loto.

But it was the emergence of Brumbies youngster Darcy Swain, first off the bench and then from the opening whistle in the third Test, that really caught the eye. Having got up to challenge the defining lineout at Suncorp in the first Test, which then led to a French catastrophe the great Inspector Clouseau would be proud of, and again raised the tempo when he was introduced in Melbourne, Swain played the 80 back in Brisbane on Saturday, finding his way to the centre of the French maul to end the Test and ultimately win the series.

Swain’s arrival at Test level is timely. With Rennie showing little interest in repatriating either Rory Arnold or Will Skelton, at least for Tests Down Under, the more options Australia have in the second-row the better. Izack Rodda, who has arrived in Perth, is expected to come under consideration through the Rugby Championship while the Wallabies have high hopes for Trevor Hosea if he ups his “repeat efforts”.

Whether skipper Michael Hooper would produce the kind of rugby against France that has made him one of the world’s best opensides for nearly a decade had been one of the big pre-series talking points.

In hindsight, the chatter was unjustified as Hooper soon demonstrated why he remains the Wallabies’ heartbeat and such a crucial leader as Rennie attempts to bring through the next generation of Australian players.

From backing his way over the line in Brisbane, gut-running to get to Andrew Kellaway for a pass in Melbourne or generally popping up at the breakdown or chasing down French breaks and desperately scragging at the shorts of opposition players, Hooper was everywhere.

But perhaps his most significant contribution and a reflection of the growth in his leadership came in the aftermath of Marika Koroibete’s high tackle in Brisbane. Hooper hasn’t always been the best manager of referees in his time as Wallabies captain, but his measured dealings with Ben O’Keeffe, including the insistence that Anthony Jelonch undergo an HIA, brought calm to a potentially volatile situation. He also made the point about Jelonch’s bodyheight, which was later proven to be correct at Koroibete’s judiciary hearing.

Harry Wilson probably remains in the box seat at No. 8 but Isi Naisarani’s contribution in Brisbane will have put the Reds No. 8 on notice. There have never been any doubts Naisarani’s ability to carry the ball or break tackles, but a tendency for laying on the ground for those extra few seconds that led to his dumping last year.

So to see the big Fijian busting a gut in cover defence, diving to make a tackle, and then win a vital turnover in the 50th minute last Saturday must have brought smiles to the Australian coaching box. Just as pleasing was Lachie Swinton’s efforts in tight, and for the fact there was not a moment when ill-discipline looked like it might get the better of him.

It will be interesting to see if Rennie approaches the No. 6 like he does the No. 3 and potentially looks to rotate Rob Valetini and Swinton depending on the opposition.

Nic White will return to Wallabies camp on Sunday, restoring the team’s scrum-half contingent to full-strength. White’s ability to bounce out from rucks and pick off back-tracking defenders will be welcomed addition at the selection table, so too the length and accuracy of his pass which is clearly superior to that of both Tate McDermott and Jake Gordon.

But didn’t McDermott do the jersey proud in Brisbane? His kicking game was generally sound, but for one poor decision that was neither accurate enough to find touch or high enough to give the Wallabies’ chasers a chance to pressure, but otherwise McDermott delivered everything you might have expected from his first run-on start.

Which brings us to Noah Lolesio. The Brumbies playmaker got better with every start against the French and it will be huge call to remove him from the No. 10 shirt if James O’Connor can get back to full fitness, which at this stage appears unlikely. Even so, O’Connor won’t have played since the Reds’ Round 3 Trans-Tasman win over the Chiefs, in late May; is that really the build-up you want for your No. 10 at Eden Park?

It may hinge on whether Rennie decides to return Matt To’omua to No. 12 or stick with the Hunter Paisami-Len Ikitau combination that seemed far more threatening and cohesive in the third Test. An inside back contingent that reads White, Lolesio, Paisami, Ikitau, would be one of most inexperienced Australia have ever fielded in Auckland.

But the better attacking shape and flatter alignment the Wallabies produced in the third Test was vastly superior to that from the earlier games. The wider channel, out-the-back, play that dogged the first two Tests against the French will be so easily picked off if repeated against the All Blacks.

Koroibete, having been cleared by the judiciary on Monday, will be the second name on the teamsheet behind Hooper and no doubt desperate to make amends for his fifth minute dismissal last weekend. The decision may have ultimately been the wrong one, but it will be reminder that he is treading a fine line by tackling ball-and-all.

Just who partners Koroibete on the other wing is up in the air. Filipo Daugunu lasted just 90 seconds in Brisbane and will be sidelined for some time with a broken wrist, which opened up the opportunity for Reece Hodge to probably see a lot more action than he was expecting.

Tom Wright will meanwhile play club rugby in Canberra this weekend following two fairly patchy performances in the first two Tests, while Andrew Kellaway can probably think himself a little hard done by after he was competent in two cameos off the bench in Brisbane and Melbourne.

Meanwhile in Brisbane club rugby on Saturday, Jordan Petaia will make his return from injury at fullback. Rennie confirmed Petaia was being considered at fullback within the Wallabies and was back to full fitness before the third Test, but a lack of recent playing time meant he wasn’t ready to face the French.

Keep an eye out for some interested spectators that resemble Rennie and Scott Wisemantel if you’re heading to Brisbane’s Sci-Fleet Stadium on Saturday.

Could Petaia challenge Hodge, Wright and Kellaway for a spot on the wing or even dislodge Tom Banks from fullback? The Reds youngster will certainly be in the mix, while Suliasi Vunivalu, who is tracking for the end of the Bledisloe series, can also offer a bigger body out wide and a genuine cross-kick target.

As demonstrated by Paisami’s maiden Test start in Bledisloe I last year, the Wallabies coach is not immune to bold selection decisions. Petaia and Vunivalu are both immensely talented, but at this point raw rugby players, though that won’t be a hurdle should Rennie believe they can positively impact this building Wallabies outfit.

Serrano-Cruz: Two unlikely paths merge for a chance to make history
Big 12 football schedule release: Every game for every team in 2023
Trade grades: Horvat fills a need for the Islanders — but at a high cost
Sources: Mets, McNeil agree to $50M extension
Braves ink Snitker to extension through 2025