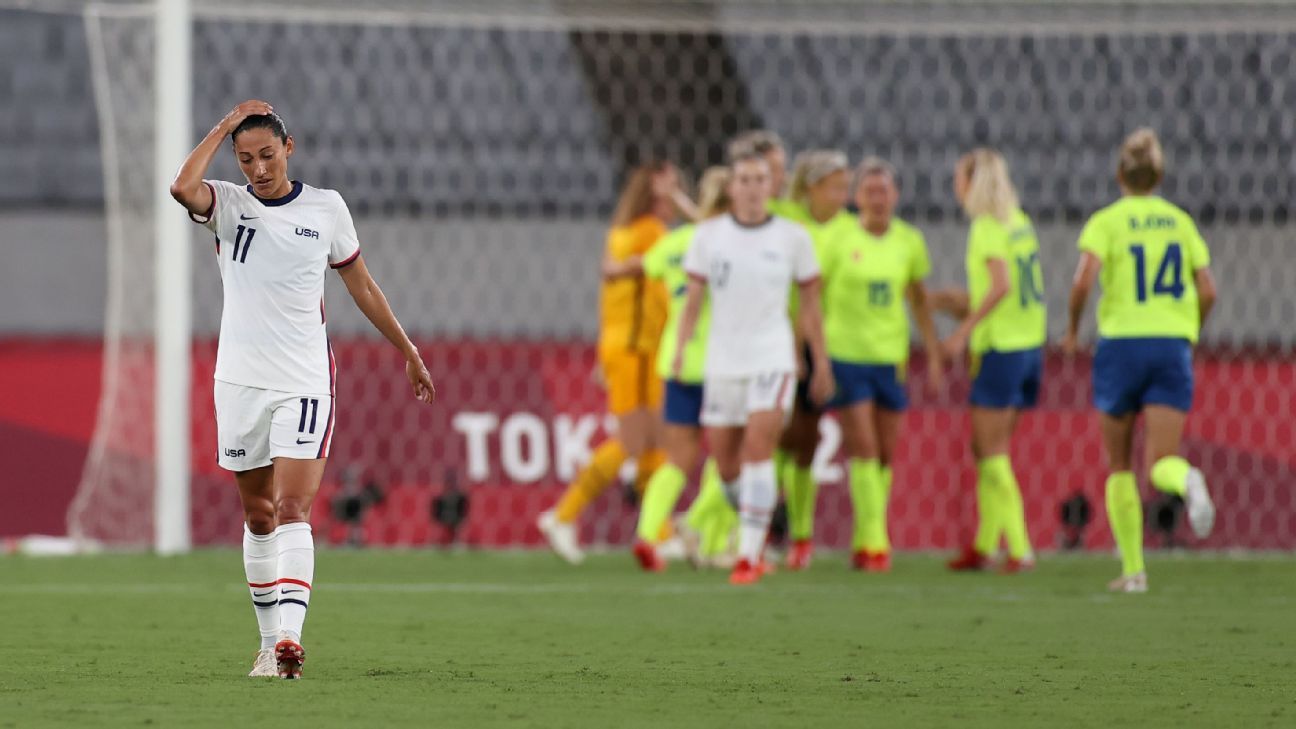 It was bad enough that the U.S. women’s national team lost 3-0 to Sweden to open its Tokyo Olympics. But the way the USWNT lost made the result feel somehow worse and more significant. Now, the question USWNT fans will be asking — and that the USWNT players might be asking themselves — is whether that dismal performance was a one-off or a sign of deeper issues.

The U.S. faces New Zealand on Saturday (7:30 a.m. ET) in its second game of Group G, so there’s not much time for the players to dwell on the search for answers. But that doesn’t make the potential weaknesses that Sweden exposed any less of a problem.

If the U.S. doesn’t turn its Olympic campaign around against New Zealand, here are some possible reasons.

Try to guess which game this describes: Working in a coordinated high press, Sweden created numerical advantages and then blocked off passing lines, which caused the U.S. to lose the ball. The USWNT failed to counteract Sweden’s tactics and instead played reactively. Sweden’s job became even easier due to the USWNT’s sloppy execution.

“If we play the way we played today, it’s not good enough,” coach Vlatko Andonovski said in April. “I know that, nobody has to tell me that, but it’s just a good opportunity for us to get better.”

The problem is, the U.S. got worse. That draw in April — Andonovski’s only time not winning a game as the USWNT’s head coach until the Olympics — should have raised some red flags. But on Wednesday, it looked as if the USWNT hadn’t learned from it.

That’s not to say everything Sweden did was exactly the same as that April game: It switched from a three-back formation to a four-back, and that change in system seemed to catch the Americans off-guard. But the U.S. also seemed to erroneously expect Sweden to play more conservatively, as it has in previous tournaments against the Americans. Instead, Sweden doubled down on its game plan from April and played even more aggressively.

Once the Americans realized what they were in for, they didn’t adapt. Making it worse was that Andonovski seemed either reluctant or unable to prescribe the on-the-fly tactical changes that could’ve changed the game.

Sweden swarmed the USWNT’s wide full-backs, forcing repeated turnovers in dangerous areas, and Crystal Dunn in particular was left isolated. But the USWNT never really made sure she got the help she needed by having the wingers drop deep. There wasn’t enough movement or enough players making runs, and the Americans were too static.

With every personnel change, like bringing on Julie Ertz for Samantha Mewis at halftime, the USWNT’s performance got only marginally better because its collective approach just wasn’t working. That comes down to Andonovski.

This is Andonovski’s first major tournament — he was hired after coaching stints in the NWSL and, before that, indoor soccer — and the lingering question is whether his lack of international experience failed him.

The USWNT lacked speed, and might have showed its age

It’s one thing to bring 39-year-old Carli Lloyd on as your clutch late-game closer. It’s another to bring her on at halftime and expect big changes — particularly in a game like the one against Sweden.

The U.S. looked slow to react and sluggish, and what the Americans could have used was a boost of speed and energy. But a player like that wasn’t on the U.S. bench. The only one who fits that mold in Tokyo, the speedy 28-year-old Lynn Williams, didn’t make the game-day roster. (In fact, she didn’t even make the original roster until the International Olympic Committee allowed alternates to play in any game.) Meanwhile, the players on the starting front line, Alex Morgan, Christen Press and Tobin Heath, are 32 or older.

Compare that to Sweden’s two scorers, Stina Blackstenius and Lina Hurtig, who are both 25. The Swedish front six was young, physical and explosive.

While it could be the lack of youth that made it so difficult for the U.S. attack to get in behind Sweden’s back line, Andonovski better hope it’s something else. It’s plausible: The USWNT has been the oldest team at the past two World Cups and still never lost. Besides, all the U.S. players, from veterans to Olympic debutantes, looked sluggish.

But if the USWNT doesn’t show more vim and vigor against New Zealand, the age of the roster could become a culprit.

Lindsey Horan reflects on USWNT’s shock loss to Sweden at the Tokyo Olympics as the side prepare to face New Zealand.

Where did the USWNT’s mentality go?

Yes, everyone on the USWNT had a bad game. Yes, the USWNT’s tactics were no match for Sweden’s plan. But arguably the biggest problem for the Americans was their frazzled, scared and hopeless demeanor. Simply put, they didn’t look like the USWNT.

When asked after the 2019 World Cup final why the Americans are so hard to beat, Netherlands midfielder Danielle van de Donk explained: “That’s their strength: their mentality. They’ll never give up. They’ll always be fighting.” So where was that team against Sweden?

“It was talked about a lot and it needed to be mentioned: the mentality,” Lindsey Horan told reporters on Friday. “It felt like it was missing and we couldn’t pinpoint exactly what it was, but that’s never the case for the U.S. women’s national team. Any member that’s played for this team knows that. No matter what, no matter the tactics, no matter the technical execution, the mentality’s always there.”

It would be easy to blame the empty stadiums in this pandemic-tainted Olympics — after all, the popular USWNT is used to playing in front of boisterous home crowds, even when playing abroad — but there’s a risk with every generational shift of the USWNT that the culture set decades ago by the foundational members of the USWNT might begin to erode. If that ever happens, the USWNT has much bigger problems than tactics or player selection.

“That was a nice little reminder against Sweden — I say ‘nice,’ but it was terrible,” Horan added. “Now we get to go out and show who we are and the grit that we have against New Zealand.”

Fernando Palomo explains how Sweden became the first side to beat the USWNT since 2019.

It’s been a popular claim for years now: The world is “catching up” to the USWNT. Except it hasn’t happened. (The team that won the past two Women’s World Cups? The United States.)

But at some point, the predictions will come true and the rest of the world will “catch up.” The question is: When? And did Sweden prove it’s already happened?

Realistically, it’s not something that will be verified by a single result or a single tournament. It’s been happening for a while: Clubs in Europe with a lot of money and a lot of experience in building successful soccer teams have started investing in the women’s game, which is going to counteract the built-in advantage of the USWNT — Title IX, which incentivizes colleges to provide top-tier resources to female soccer players and incentivizes players to take soccer seriously to earn scholarships.

We can see the gradual progress abroad just by looking at Sweden’s roster. Take, for instance, Kosovare Asllani: She was one of Sweden’s best players and she plays for Real Madrid, a world-renowned club that didn’t even have a women’s side until 2019. LHurtig, one of the scorers, plays for Juventus, which established its women’s side in the past four years.

It’s unlikely that the growth of women’s soccer around the world will be the end of the USWNT’s reign as a world power. Title IX will remain a powerful advantage, and young Americans will develop at European powerhouses if that’s the best route, as we’ve seen with Horan at Paris Saint-Germain and Catarina Macario at Lyon. But it will make winning a tournament like the World Cup or the Olympics a whole lot harder.

There was a time when the USWNT was in a small and exclusive group of what could be considered “good” teams. That group has been expanding, and in this very small Olympics of only 12 teams, there are more teams that should reasonably be viewed as candidates to win gold than not.