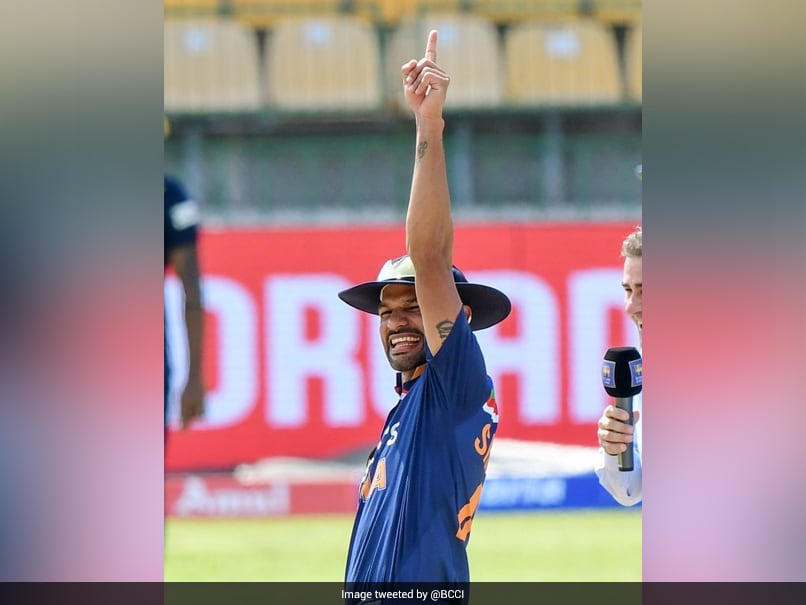 Shikhar Dhawan, India’s stand-in captain during the white-ball tour of Sri Lanka, is a natural entertainer on the pitch, with his thigh-slapping celebration after taking catches gaining an iconic status among fans. Dhawan now has decided to bring his entertainment-factor even to the captaincy’s post, as he celebrated winning the toss in the 3rd ODI with a ‘thigh-five’. Dhawan lost the toss on both occasions during the first and second One Day Internationals against Sri Lanka, but he finally broke the jinx when he came out on the field during the third and the final ODI at the R Premadasa Stadium in Colombo.

Immediately after winning the toss, Dhawan looked to his dugout and slapped his thigh in celebration, before opting to bat.

#TeamIndia have won the toss and they will bat first #SLvIND pic.twitter.com/51qWQOtePK

India made six changes in their lineup and handed ODI debuts to five players. Sanju Samson, Nitish Rana, Krishnappa Gowtham, Rahul Chahar, and Chetan Sakariya were all given their ODI caps while Navdeep Saini was also brought into the team, with Ishan Kishan, Krunal Pandya, Yuzvendra Chahal, Kuldeep Yadav, Deepak Chahar and Bhuvneshwar Kumar rested for the final ODI.

The match was halted due to rain and before the rain came in the Indian team was in trouble. India lost their top three after they got a good start in the first powerplay. Prithvi Shaw and Sanju Samson stood for 74 runs partnership for the second wicket.

After play resumed, with the match reduced to 47 overs a side, Sri Lanka spinners put the hosts in control as India slid from 157/3 to 195/8.

Rahul Chahar and Navdeep Saini put up a rearguard of 29 runs but the former fell to a short ball from Chamika Karunaratne.

Dushmantha Chameera then got Navdeep Saini’s wicket to bowl India out for 225.

India won the first two ODIs and come into the game with an unbeatable 2-0 lead.

After the ODI series, the two teams will face off in three-match T20I series starting July 25.