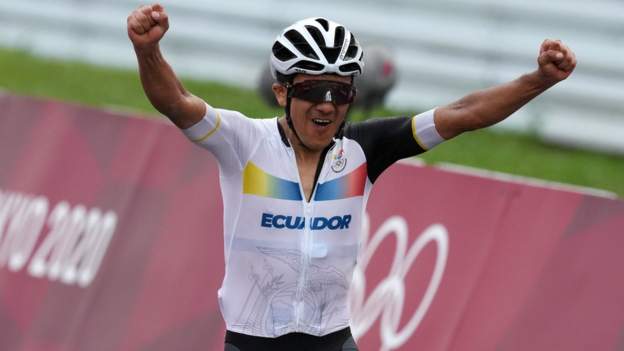 The 35-year-old, who also came off his bike at Rio 2016, suffered a fall involving team-mate Tao Geoghan-Hart.

Thomas, the 2018 Tour de France winner, eventually pulled out with 60km to go.

The riders finished in front of around 10,000 fans at the Fuji International Speedway circuit, with venues outside Tokyo allowed to host up to 50% capacity.

Thousands of onlookers also lined the streets to get a glimpse of the competitors as the 234km route weaved its way out of the city towards the foothills of Mount Fuji.

An early breakaway group opened a gap of more than 17 minutes as they hit the ascent towards the Doshi Road, the first of five climbs on a mountainous course.

It was on that stretch the British pair crashed, with two-time team pursuit gold medallist Thomas tumbling over Geoghan-Hart after the 2020 Giro d’Italia champion lost his front wheel.

That will have brought back memories of 2016 for Thomas, when he fell during the final descent in Rio, and of this year’s Tour de France when the Welshman dislocated his shoulder.

The leading riders were eventually reeled in and Pogacar saw a bid to break free snuffed out, before Carapaz and American Brandon McNulty went clear.

But it was Carapaz who had the legs to pull away once more for a superb solo victory and his first gold medal.

Why the transfer window should be abolished: chaos for clubs, a playground for agents
Transfer Talk: Arsenal push for Chelsea’s Jorginho before deadline
How to watch PGA Tour’s AT&T Pebble Beach Pro-Am on ESPN+
Giants’ Love: Sirianni has ‘free ride’ as Eagles HC
NHL continues diversity efforts during AS events