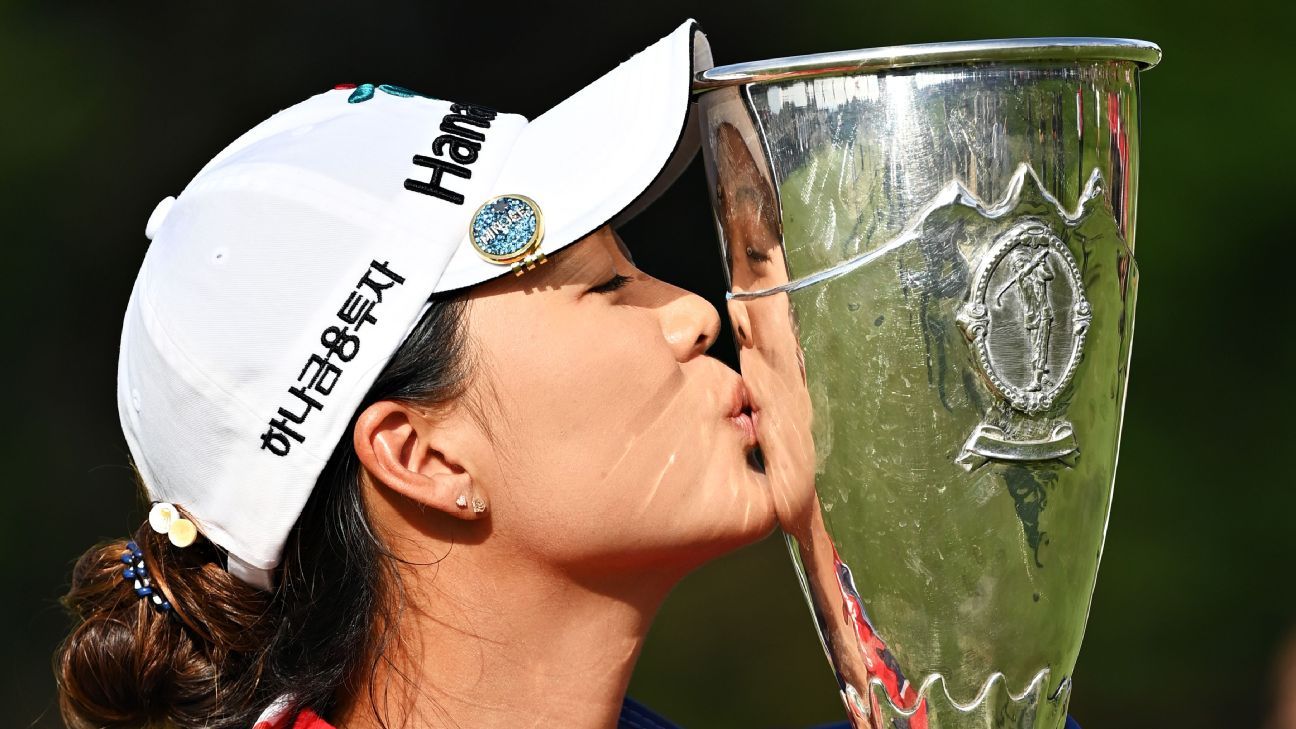 Lee6 had to take a drop shot when her second shot on the first extra playoff hole flew into a pond, while Lee’s superb second attempt landed near the flag.

Lee6 ended with a bogey to give the 25-year-old Lee three putts for victory and a sixth LPGA title.

She missed the first but made the second and was doused in Champagne by 2015 Evian champion Lydia Ko.

“It’s really great to win a major, it’s really amazing,” said Lee, whose younger brother Min Woo Lee has two wins on the men’s European Tour. He won the Scottish Open two weeks ago — also in a playoff and on the first extra hole.

Lee and Lee6 had finished at 18 under overall, but in vastly different circumstances.

Lee trailed Lee6 by seven shots overnight but drew level with a superb 7-under 64 in the final round which included four birdies on the last five holes. After drifting away, Lee6 (71) hit back with three straight birdies to force a playoff.

Teenage American Yealimi Noh (67) finished third on 17 under when she missed a birdie chance on the 18th.

“A lot of positives, it’s been my best major finish,” the 19-year-old Noh said.

Lee and Lee6 both teed off strongly in the 18th-hole playoff.

Lee went for a 5-iron on her second shot, but her caddie advised her to switch to a 6-iron and was proved right.

That increased the pressure on Lee6, whose tense second shot flew into the water. Her head dropped as she knew her chances of a second major had just gone. She won the U.S. Women’s Open in 2019.

The day’s best round went to Ireland’s Leona Maguire. Her 10-under 61 tied the lowest round ever by a female or male in a major — two days after Lee6 did the same in the second round. They share the record with South Korea’s Hyo Joo Kim, who also did it at Evian in 2014.

Lee6’s big lead evaporated after eight holes as Noh moved level at 15 under. By hole No. 14 Noh led by one stroke from Lee6 and Lee, who moved level with her with a birdie on 15 and one ahead after another on 16.

Lee held a tricky par on No. 17 and Noh put her hand on her face in frustration after missing a birdie on the 16th. Lee6 sank a birdie on that hole to pull level with Noh.

Lee6 and Noh then made birdies on No. 17 to stay one shot back from Lee and give themselves a chance.

Lee snacked on some fruit while she waited for them to finish the 18th, then realized there could be a playoff and started some putting practice.

Lee6 had a very long eagle to win the tournament and fell a distance short, but held her nerve to make birdie and set up a playoff.

Minutes later, it was all over.