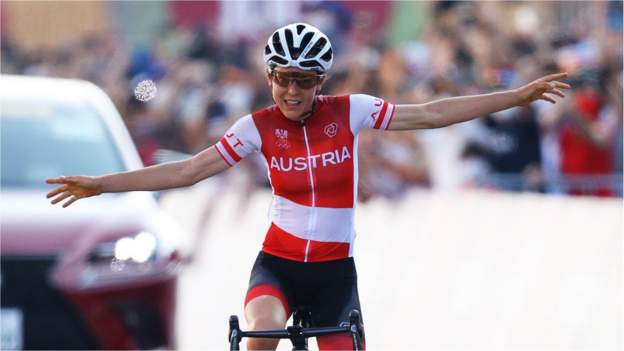 “Is it done now? Do I have to continue riding?”

Anna Kiesenhofer doesn’t need to ride another kilometre again if she doesn’t want to. The Austrian has achieved the ultimate – a relative unknown coming from nowhere to win Olympic gold.

A mathematician by day with two degrees and a PhD, she has no professional cycling team, although they will probably be queuing up for her signature after witnessing Sunday’s stunning road race display.

The 30-year-old launched a remarkable solo breakaway, sustaining it – her lungs and legs screaming – to finish more than a minute ahead of 2019 world champion Annemiek van Vleuten.

So great was Kiesenhofer’s advantage that the Netherlands’ Van Vleuten did not realise she was only in second place, celebrating as though she had won as she crossed the line, before exclaiming: “I was wrong.”

Olympic riders do not have access to race radios as they do in professional road racing.

“This is an example of what happens if you ride an important race like this without communication,” Van Vleuten said.

“I don’t think anyone wrote her down. I don’t know her. How much can you do wrong, if you don’t know someone?

It’s unlikely she will have realised the magnitude of her success yet, however, her exhaustion apparent as she collapsed to the tarmac of the Fuji International Speedway circuit, gasping for oxygen as her depleted body realised it could finally stop.

“I was just trying to get to the line. My legs were completely empty,” she said.

“I have never emptied myself so much in my whole life. I could hardly pedal any more. It felt like there was zero energy in my legs.

“It’s just so incredible. I have really sacrificed so much for today. I wasn’t expecting to finish it off like that. I sacrificed everything even for a top-15 place and now to get this, for the sacrifices, it’s just such a reward, it’s incredible.”

Kiesenhofer was one of a five-rider group that escaped the rest of the field within moments of the 137km race getting under way.

That group was cut to three – Kiesenhofer, Anna Plichta of Poland and Israel’s Omer Shapira – with around 70km remaining, before the Austrian time trial champion went solo on the first approach to the Speedway circuit, where the race would conclude.

Van Vleuten broke away from the peloton on a charge of her own, looking to make amends for the horror crash that ended her road race at Rio 2016 when she had looked set for the title.

Van Vleuten who had crashed earlier in the race, was reeled back in with around 25km to go, before she and her Dutch team-mates launched another chase with around 10km left, absorbing Plichta and Shapira back into the peloton.

She then attacked again in the closing stages, thinking she was breaking away for the win.

But Kiesenhofer, clearly struggling as she willed her body not to cramp, continued to power her way around the circuit up ahead, glancing over her shoulder but finding no opposition in sight.

After crossing the line, she fell to the ground in tears, stunned in the aftermath of the biggest win of her career as Van Vleuten and Elisa Longo Borghini took silver and bronze behind her.

Kiesenhofer, without a professional team since 2017, is her nation’s first gold medallist at a summer Olympics since Athens 2004.

Team GB’s Deignan, who won silver at London 2012, finished 11th in the race, but team-mate Anna Shackley did not complete the race.

“It was a weird old day – I was between a rock and hard place really,” Deignan told BBC Sport.

“From midway through I was on my own but unfortunately on my own but also marked so I didn’t have the freedom to ride as a solo rider. Tactically I think I did the right thing – it just didn’t go my way.

“It was a weird race. Although there are small teams there are agendas within teams. Because the race is so hot and so humid all of the moves were a bit blunted, there wasn’t that kind of spark. It was a defensive race but still really hard.”

Deignan stepped away from cycling in 2018 to have her daughter, Orla, but returned to win the Women’s Tour and the overall 2020 World Tour title.

She finished fifth at the Rio Olympics in 2016, with the build-up to the Games overshadowed by the prospect of a ban from cycling after she was accused of missing three drugs tests in a year, before she was cleared by the Court of Arbitration for Sport just days before the race.

She has previously told the BBC how Orla’s arrival made her “fall back in love with the sport”.

“I’m obviously really disappointed but I have the perspective that I put myself in the position to be here. I have had a great team behind me,” she said.

“We have had a pandemic and we have still had an Olympics and there is so much to be thankful for.”