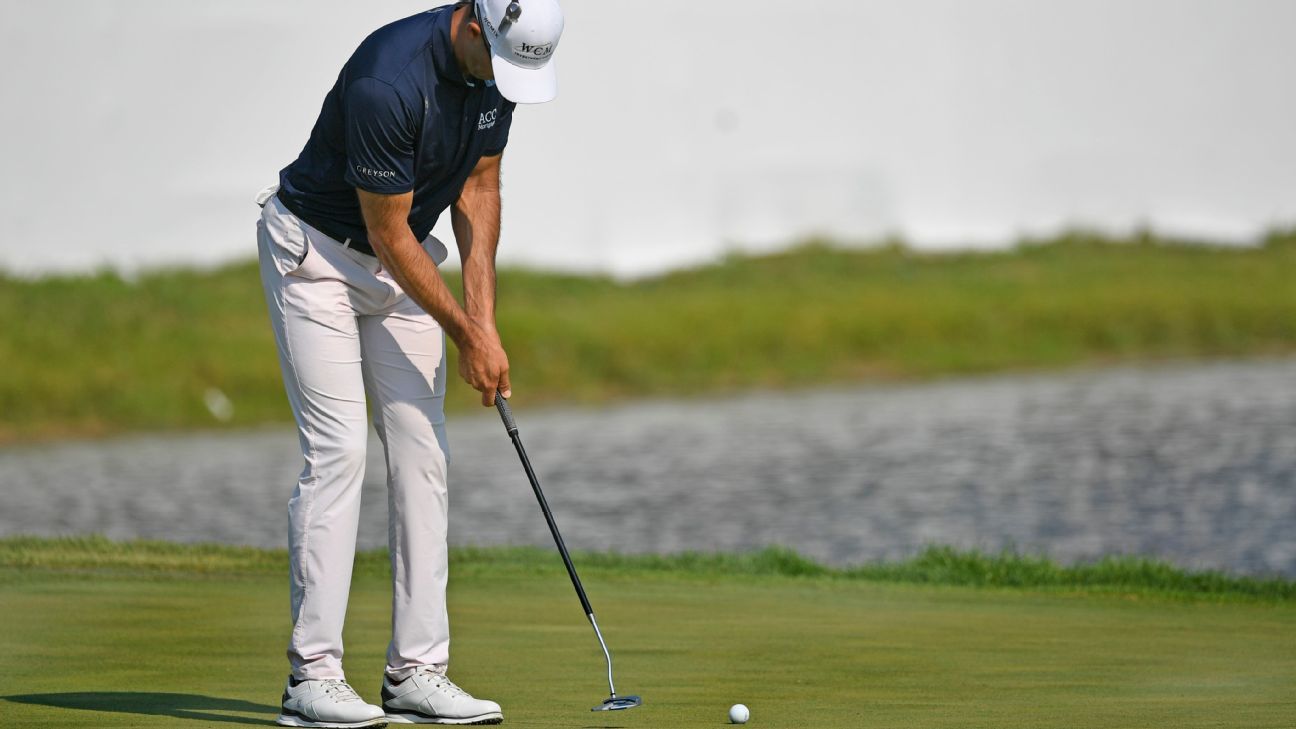 BLAINE, Minn. — Cameron Tringale made a short par putt on the treacherous par-5 18th hole at the 3M Open for a 5-under 66 and a one-stroke lead Saturday over Gary Woodland and Maverick McNealy.

Tringale, who tied for third last year at the TPC Twin Cities, eagled the par-5 12th and had three birdies in a bogey-free round. Winless on the PGA Tour, the 33-year-old topped the crowded leaderboard at 12-under 201.

Woodland overcame a double bogey on No. 1 with birdies on five of his next six holes in a 67. McNealy had a bogey-free 68.

Pat Perez shot a 66 to join an eight-way tie for fourth, two shots off the lead. Four players were three strokes back. Louis Oosthuizen, the highest-ranked player remaining at No. 9 in the world and in the FedEx Cup standings, was in a six-way tie for 16th place at only four shots behind.

During yet another unseasonable day of 90-plus-degree heat, the scores crept up throughout the afternoon with the thermometer as drier and breezier air affected the play.

Keith Mitchell had a record-tying seven straight birdies to start his round on his way to a 29 on the back nine. The front nine? He posted a 37 for a 66 that left him four strokes behind Tringale. Rickie Fowler birdied six of his first 10 holes, before a triple bogey on the 18th left him with a 70 and a tie for 29th in a six-stroke deficit.

The mini-lake in front of the 18th hole swallowed up a lot of balls. It’s currently ranked as the hardest par 5 on the PGA Tour. There were nine bogeys and 12 scores worse than that Saturday.

The 29-year-old Mitchell, whose only career PGA Tour victory came in the Honda Classic in 2019, had his streak stopped when a putt lipped out on the 17th green. Then the hot air grew drier and breezier, forcing a more conservative approach. The momentum shift, he said, was palpable. His tee shot on box No. 1 after the turn landed into the native grass area.

“I was like, ‘If I keep swinging like this and executing like this, we’re going to have a chance, and then the wind picked up and I clearly didn’t,'” said Mitchell, who described his day as “two completely different rounds.”

The first half of his card was clearly a keeper.

“I actually felt some nerves a little bit, but they were good nerves. It was a good kind of nervous, not like the ‘Hope I don’t miss the cup’ nerves or ‘Where do we stand on the FedExCup’ nerves. It’s more of like, ‘Hey, I’m in contention again, and I want to play well’ nerves, and those are the good kind. Those are the fun kind.”

With only three tournaments remaining after this prior to the FedEx Cup playoffs, Mitchell is one of several golfers near the 125-man cut who could use a strong performance on Sunday to create a bigger cushion. Mitchell entered the week ranked 114th. Perez was 115th. Chez Reavie, who was two strokes behind Tringale, was 119th. Fowler was 124th.