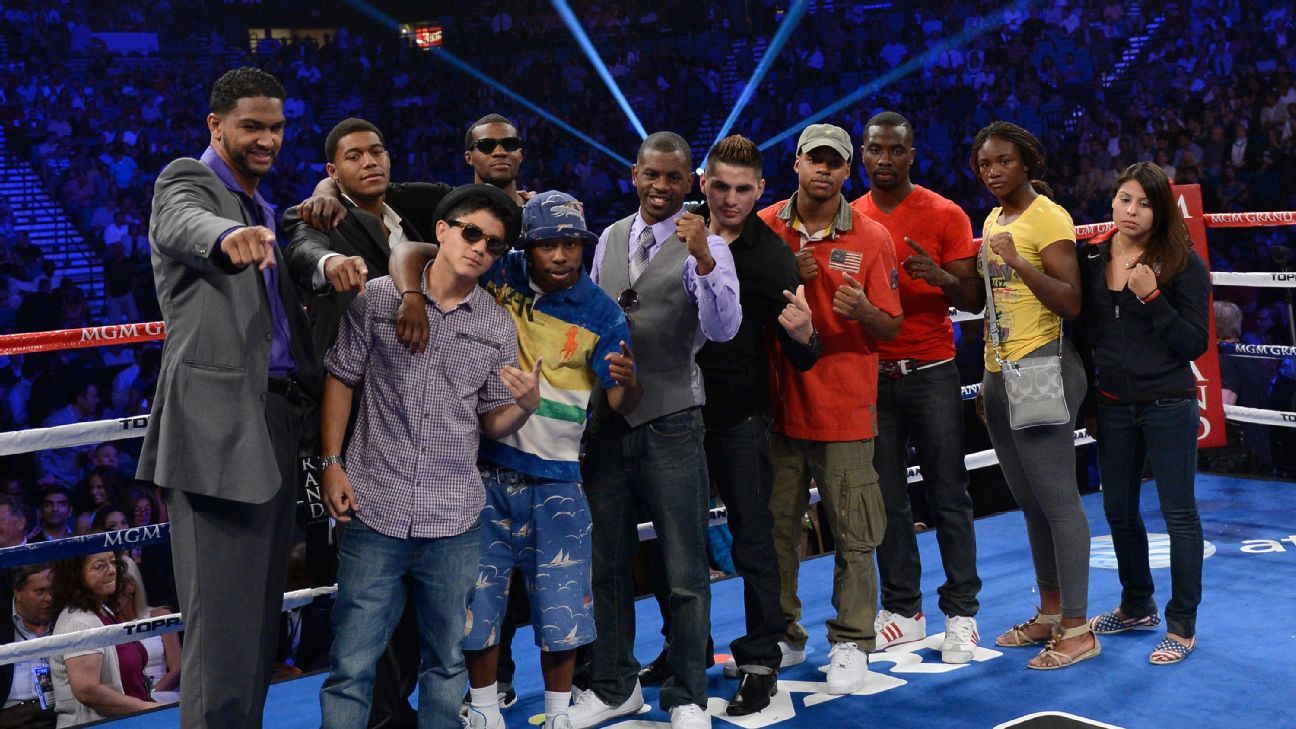 Olympic boxing offers a glimpse into the future of who might shine in the professional ranks, but failure at the Games doesn’t always lead to a lack of professional success.

Take the 12-member U.S. boxing team of 2012, which arrived in London with high hopes but earned only two medals — gold by a prodigiously talented 17-year-old Claressa Shields at middleweight, and bronze for the equally talented Marlen Esparza at flyweight.

The men’s team left with nothing.

Instead, boxers from other nations claimed the medals — some of whom went on to become stars in the professional game, including Ukraine’s Vasiliy Lomachenko and Oleksandr Usyk, and Great Britain’s Anthony Joshua and Katie Taylor.

Make your picks and compete for a chance to win $5,000! Make Your Picks

It all went wrong in London, for a team that also featured the likes of future world champions Errol Spence Jr., Joseph “JoJo” Diaz, Jose Ramirez, Jamel Herring, Queen Underwood, Terrell Gausha, Marcus Browne, Michael Hunter, Dominic Breazeale and Rau’Shee Warren. Yet despite the lack of Olympic medals, most of the team went on to enjoy considerable success as professionals.

So for the current 10-member U.S. boxing team — which includes Keyshawn Davis, Rashida Ellis, Virginia Fuchs, Naomi Graham, Troy Isley, Delante Johnson, Oshae Jones, Duke Ragan, Yarisel Ramirez and Richard Torrez Jr. — the focus in the coming weeks will be on winning gold. But regardless of their results, even bigger things could be ahead.

Here’s how successful that 2012 U.S. boxing team turned out.

One of the best prospects for gold in 2012, a then-22-year-old Spence bowed out at the quarterfinals stage to eventual gold medalist Andrey Zamkovoy. The now 34-year-old Russian is competing in Tokyo. Spence went on to become one of the best boxers in the world, winning the IBF welterweight world title from Kell Brook on a happier return to England in 2017.

Spence has made five world title defenses, with outstanding wins over the likes of Shawn Porter, Mikey Garcia and Danny Garcia. Spence (27-0, 21 KOs), from DeSoto, Texas, faces Manny Pacquiao on Aug. 21, in a bout that could solidify his spot as one of the best fighters in the world, pound-for-pound.

Along with Ireland’s Katie Taylor, who won gold at lightweight in 2012, which was the first Olympics to feature women’s boxing, Shields is the standout star of women’s boxing at the moment. Shields is a three-division champion in boxing, and two times an undisputed champion — the first in history to do so in the four-belt era. She also is preparing for her second fight in mixed martial arts in August.

As a professional boxer, Shields won her first title in her fourth pro bout. Most recently in a boxing ring, Shields (11-0, 2 KOs), 26, of Flint, Michigan, unified all four major junior middleweight belts against Marie Eve Dicaire in March. Shields is ESPN’s No. 1 pound-for-pound women’s boxer in the world.

After winning bronze in 2012, Esparza turned professional in 2017 and won the WBC flyweight world title in June. The Houston boxer recovered from a 2017 loss on a cut, and at 31, Esparza is moving back toward bigger fights.

The gangly 19-year-old Californian was outpointed by Uzbekistan’s Fazliddin Gaibnazarov in the round of 16, but then started a hugely successful professional career. Ramirez held two versions of the junior welterweight world title until losing a decision to Scotland’s Josh Taylor (who also failed to win a medal in 2012) earlier this year, in one of boxing’s biggest fights of 2021. Ramirez (26-1, 17 KOs), 28, made five world title defenses and is ESPN’s No. 2-ranked fighter at junior welterweight.

Ramirez told ESPN earlier this year: “At that time in 2012, we all lacked international experience — I was only 19 and had only started boxing internationally in 2011 — and we also lacked experience of the scoring system.”

The Team USA boxing captain and U.S. Marine lost his opening bout in London. After 2012, Herring finished his service with the Marines and turned professional, fighting his way up the ranks until he earned a decision win over Masayuki Ito to win the WBO junior lightweight world title in 2019. Herring (23-2, 11 KOs), 35, from New York, is still improving and earlier this year produced his best performance, a stoppage win over Carl Frampton in his third title defense. Herring is the No. 4 junior lightweight in the world, according to ESPN.

At age 19, JoJo Diaz lost in the round of 16 to Lazaro Alvarez, who is competing in Tokyo for Cuba. Diaz turned professional later in 2012, and in January 2020 won his first world title, the IBF featherweight belt, with a decision win over Tevin Farmer. After losing to Gary Russell Jr. in 2018, Diaz (32-1-1, 15 KOs) stepped up a division and, in his last fight in July, he captured the vacant WBC interim lightweight title with a unanimous decision victory over Javier Fortuna. Diaz is ranked No. 7 at lightweight in the latest ESPN rankings.

Warren was a favorite for gold — a three-time Olympian who was in fine form going into 2012 after he reached the semifinals of the 2011 World Championships. But the Cincinnati boxer lost in the round of 16 and turned professional later in 2012. Four years later he was the WBA bantamweight world champion after a majority decision win over Juan Carlos Payano. Warren (18-3, 4 KOs), 34, lost the belt in a first defense and was beaten in a 2017 title shot. He is due to box again on Aug. 14.

Gausha, who also lost in the round of 16 in 2012, is 22-2-1 with 11 KOs as a professional, after winning his last fight to recover from a points loss to Erickson Lubin at junior middleweight in 2020. Gausha is a world title contender at 154 pounds and challenged Erislandy Lara for the WBA world title, losing unanimously on points in 2017.

The New Jersey resident, who lost his opening bout in London 2012, is No. 10 in the latest ESPN light heavyweight rankings and is trying to revive his world title hopes after losing to Jean Pascal in 2020. Browne (24-1, 16 KOs) won the WBA interim title with a points win over Badou Jack in 2019, before losing it to Pascal.

Hunter (19-1-1, 13 KOs), the son of former professional heavyweight contender Mike Hunter, was 21 when he lost his opening bout on a countback in 2012. Five years later, Hunter, of Las Vegas, challenged Usyk for the WBO cruiserweight world title, and lost on points. Since then, Hunter — ranked No. 9 at heavyweight by ESPN — has made steady progress and fights again on Aug. 3.

Breazeale, a 26-year-old former quarterback at the University of Northern Colorado, carried the nation’s hopes in the heaviest classification in 2012, but was beaten in his first bout. The Californian went on to challenge the gold medal winner from 2012, Anthony Joshua, for the IBF heavyweight world title in 2016, but was stopped in the seventh round.

Deontay Wilder, a bronze medalist for the United States in 2008, then defended the WBC version of the heavyweight title by knocking out Breazeale in one round in 2019. After two world title attempts, Breazeale (20-3, 18 KOs), now 35, will need to build a series of wins to get another shot. He lost his most recent fight in February to Otto Wallin.

After losing her opening bout in London 2012, Underwood never turned professional. She continued competing as an amateur and retired after losing a unanimous decision to Katie Taylor in 2016.