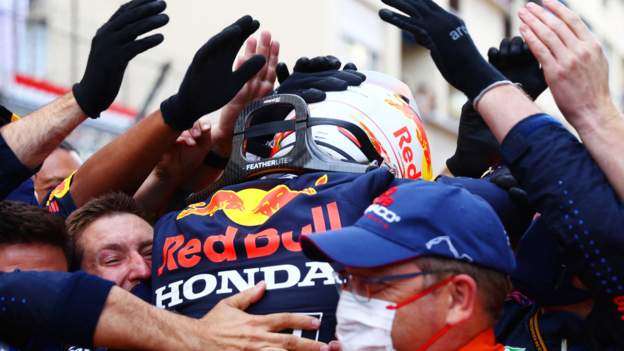 Honda’s success with Red Bull this season has been built on the Japanese company’s previous failures in Formula 1, its technical boss says.

Honda made major changes to its engine for 2021, introducing an all-new design that has helped Max Verstappen into the World Championship lead.

“We learned a lot from our failure,” technical director Toyoharu Tanabe said.

“We needed time to fix our problems. We felt a kind of limitation and then we made a big change for this year.”

Honda returned to F1 in 2015 with McLaren, before splitting with the team after three years of under-performance from both sides.

The engine Red Bull are racing this year was originally planned for 2022, but was brought forward to this season after Honda decided last autumn to pull out of F1 at the end of 2021.

Tanabe said the smaller, lighter, more powerful engine with a lower centre of gravity introduced for this season was the result of a “big effort” for 2021.

“It was tight, but we tried everything,” Tanabe told BBC Sport in an exclusive interview.

Although Honda made an extra effort to introduce this year’s engine earlier, Honda F1 general manager Masahi Yamamoto said it would not have been possible for Honda to have made the same gains earlier.

“The engineers have picked up so much experience from failure and success,” Yamamoto said. “In the time [we had], it was very tough to make it earlier.”

How have Honda done it?

Tanabe said that the new engine was the first to have been designed fully with Red Bull in mind, rather than being a modification of a previous unit.

“With Red Bull two years ago we just put our power-unit into their chassis,” Tanabe said. “Of course, we modified it a lot but there were a lot of limitations.”

The new power-unit, he says, was designed with the intention of improving the performance of the chassis as well as the engine – hence the size and packaging modifications.

Red Bull made a series of requests of Honda for the engine that they believed would improve the overall performance of the car.

Honda says its engine is now “close” in performance to the Mercedes, which Tanabe says he believes is still the “top” engine.

But he admits that improvements in the Honda engine design mean it can often deploy electrical energy from the hybrid system on the straights for longer than the Mercedes – something that can be seen on the GPS traces of the cars used by teams as part of their performance measurement.

“In the previous years always you saw Honda lose speed at the end of the straight,” Tanabe said.

“This is a deficit for the lap time and also for the overtake situation. That was our weakness in the PU, so we tried to make this one much closer to the other competitors.”

The rules for F1’s complex turbo-hybrid engines reward thermal efficiency – a measure of the conversion of fuel-energy into usable power.

Fuel-flow rate is limited, so performance comes from how much energy an engine produces from a given amount of fuel.

The result has been a technological revolution across the sport. Tanabe says the Honda engine has a thermal efficiency of “more than 50%”. A typical road-car petrol engine is in the region of 30%.

A key component in an F1 engine is the MGU-H, the part of the hybrid system that recovers heat energy from the exhaust and regenerates it into electrical energy.

The problem is that the more efficient the internal combustion engine, the less energy is in the exhaust gas.

Tanabe explains: “The energy you put in the PU is limited. If you burn efficiently, it means the energy remaining in the exhaust gas gets lower, so the recovery energy source goes down.”

“We need more power, more recovery. So we changed the design of the MGU-H and every other single part of the electric system.”

These changes enabled Honda to increase the power from both the engine and the hybrid system at the same time.

Another factor in Red Bull’s competitiveness this year is a change in the chassis rules over the winter to keep car performance under control. These tweaks – cutting away part of the rear floor and removing many of the aerodynamic shaping devices around the rear wheels – affected Red Bull’s high-rake car-design philosophy less than Mercedes, who run their car flatter front to rear with so-called low rake.

Not only have Red Bull been able to recover much more of the performance lost to the 2021 rule changes than Mercedes, but they are finding it easier to achieve further development gains.

In addition to Honda’s improved engine, the result is that Red Bull have supplanted Mercedes as F1’s pace-setters.

What about the future?

Honda is pulling out of F1 at the end of 2021, a decision the company said was based on its desire for all its R&D engineers to work on a zero-carbon future for its road cars. But its engine will stick around in F1.

Red Bull have struck a deal with Honda to buy the intellectual property rights to the engine and to continue using it.

Not only that, but for 2022 at least, the engines will continue to be built at Honda’s R&D base in Sakura in Japan before this work is taken over by Red Bull’s new engine base in Milton Keynes. Some Honda R&D staff will also continue to work on F1.

Yamamoto said: “We will finish our F1 project on 31 December this year. However, we got the request from Red Bull and Alpha Tauri, which is nice, that they want to be competitive so they want us to co-operate. Therefore we are now discussing how to co-operate with them in order to make them keep competitive.”

“They have believed in Honda, so we have to give something back to them,” he says.

And the reason some Honda staff will continue on F1 into 2022 rather than all being moved to the carbon-neutral project is, Yamamoto says, “because this year we are fighting for the championship – we don’t really have time for the transition, or giving knowledge to the teams.

“Time-wise it is more reasonable we do it next year than this year.

“Most of the engineers will be moved to the next project for carbon neutrality. So we are thinking how much human resources we can use next year and we will use as much as possible to support Red Bull next year.”