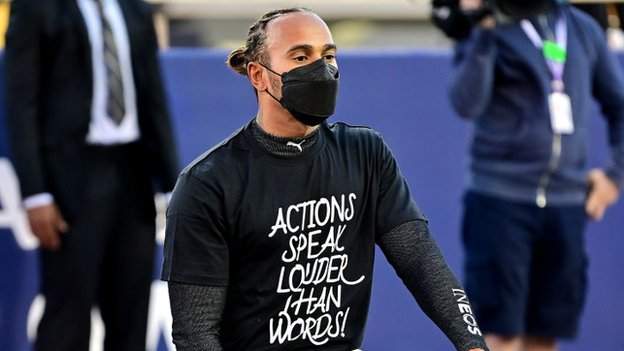 Formula 1 world champion Lewis Hamilton has launched a charitable foundation and pledged £20m to “support, champion and empower young people from under-represented groups in the UK”.

Hamilton, 36, has won the F1 title on seven occasions but is the only black driver in the sport.

He hopes the launch of Mission 44 will help youngsters from all upbringings.

“I experienced first-hand how coming from an under-represented background can affect your future,” he said.

“Luckily for me, I was able to overcome those odds through opportunity and support. I want to ensure other young people from similar backgrounds are able to do the same.

“Change within the industry is long overdue, but we are now firmly on the journey towards transforming it for the better.”

Earlier this month, Hamilton said helping motorsport become more diverse would be “the most valuable” thing he has achieved in his career.

A study he commissioned found wider societal issues were affecting black students’ opportunities within the UK motorsport industry, as well as specific barriers within the industry itself. The report said only 1% of those who worked in F1 were black.

Hamilton’s Mercedes team have also pledged their support in increasing diversity and team boss Toto Wolff said: “We’re delighted and proud to be standing alongside Lewis.

“Lewis’ determination to turn his experience into powerful and decisive action is a measure of his character and unwavering commitment to support people to fulfil their potential.

“At Mercedes, we’ve listened and worked closely with Lewis over the last year to understand how we can help open up our sport to achieve a more diverse and inclusive workforce.”

After missing World Cup and struggling for form, Matthew Hoppe’s focusing on what he can control
Spivac earns biggest career win over Lewis
Harvick to join Fox booth post-NASCAR retirement
From pranks to bonding among the NFL’s elite, Pro Bowl Games are about making memories
Navarrete wins back-and-forth slugfest vs. Wilson