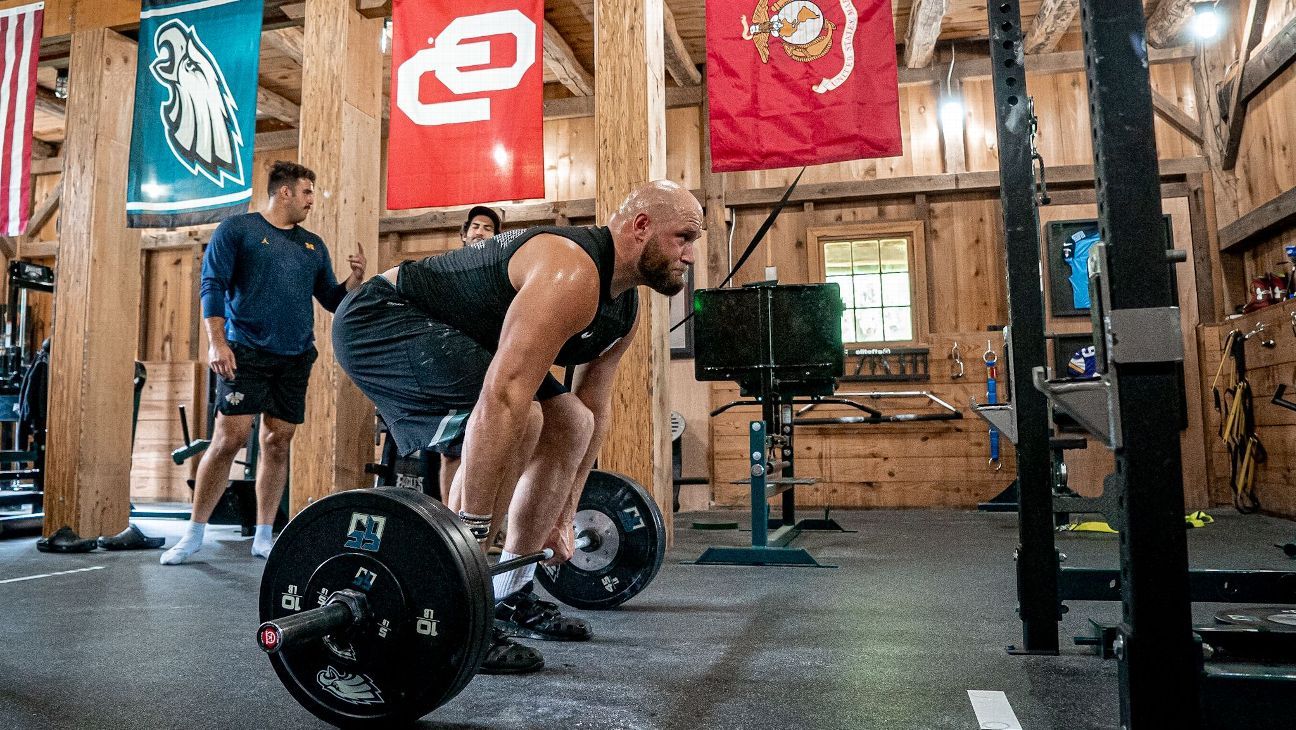 Its popularity grew in the early days of the coronavirus pandemic when most gyms were closed. It has since become a destination for a growing number of Eagles and other NFL players because of the will-testing workouts designed by strength and conditioning coach Gabe Rangel, tranquil scenery and locker-room levels of trash talking and laughter.

It has also served as a home base of sorts for an Eagles squad recovering from a 4-11-1 season, while providing an unlikely setting for quarterback Jalen Hurts to fortify his standing with key members of the team.

Last Monday, with NFL training camps days away, the Bro Barn was bustling. Inside the tight quarters were Johnson, fellow Eagles linemen Nate Herbig and Isaac Seumalo, Cesar Ruiz of the New Orleans Saints and Jon Runyan Jr., from the Green Bay Packers.

The group of players who train/have trained here is made up almost entirely of offensive linemen. The one exception is Hurts, who shares the University of Oklahoma connection with Johnson and is represented by the same agency.

“Let’s have a good day. It’s squat day!” shouted Rangel, who served in Iraq and Afghanistan during six years in the Marine Corps before becoming a coach.

With this portion of the offseason winding down, the players are going for personal records. The results will be posted on the whiteboard in Johnson’s garage, so final bragging rights are at stake. The guys have become so used to Johnson’s name being atop the leaderboard it has become a running joke, like, “Yeah, we know, Johnson’s in first. What about the rest of us normal people?”

It’s the same story on squat day. With AC/DC’s “Who Made Who” blaring through the barn, Johnson approached the squat rack and settled under a bar holding 635 pounds worth of weight, the bar bending on either side as Johnson took it on his shoulders and powered down, then back up as Rangel bellowed, “Yeeeaah!”

“Everybody knows — it’s not a secret — the guy’s a freak. He’s bigger, faster and stronger than anybody out there,” Rangel said of the 6-foot-6, 317-pound Johnson. “I don’t care what field you are in, if you’re a physician, an artist, you want to know what the best is doing and how they’re doing it. Lane sets the standard and the rest of these athletes follow because they want to know what the standard is.”

Monday’s near-three-hour session was capped with intense cardio on the climber machine. It left Herbig and Seumalo laid out on the floor on their backs, spent — and in Herbig’s case, cursing: “My legs, motherf—er.”

“Sometimes we’ll puke. Sometimes we’ll roll over. But it’s a lot of laughter, man,” said Johnson, 31, staring out at the Bro Barn from his back porch following the workout. “That’s what I like about it. That’s probably the most I get out of it: the laughter and the fun from it. When you talk to players that are retired, that’s what they miss the most is being around the guys, working, so I’m soaking it all in.”

QB in the middle

Hurts, Philadelphia’s second-round pick in 2020, has been the projected Eagles starter since the trade of Carson Wentz to the Indianapolis Colts in March.

The Eagles quarterback is a regular at the Bro Barn, but you have to wake up early to catch him. He starts his workouts at 5 a.m., hours before the rest of the group typically goes off.

Jalen Hurts with the 620 lbs deadlift. QB1 is a strong dude!

Love the deco at the gym where Hurts and Lane Johnson work out!#Eagles (via Gabriel_rangel on IG) pic.twitter.com/5Q9pEHX3Ye

“I’m still sleeping,” Johnson said, smiling. “I mess with him. I’ll say, ‘Hey man, you ain’t going to be playing games at 5 o’clock in the morning.’ But I understand the discipline part of it. That’s how he’s wired, man. He’s been that way for a long time, I think.”

Hurts, not one to put the spotlight on himself, typically doesn’t allow cameras into his workouts and declined to be interviewed by ESPN about them.

Rangel, though, has a front-row seat for what can be quite a show. Hurts was a power lifter in high school and can still move serious weight. He deadlifts 625 pounds, squats in the mid-500s and, by Rangel’s assessment, is “every bit as strong as anybody who has ever been in that gym.” Hurts sits atop the Bro Barn leaderboard in several categories, including pull-ups (23).

And he does it all while multitasking.

What you need to know about the Philadelphia Eagles:

“He’s in here, he has the playbook out and he’s yelling the plays out in between sets. I’ve never seen someone so dedicated to their craft,” Rangel said. “Jalen has highlights of whatever team they’re going to play. Other quarterbacks he really respects, he’ll throw their highlights up while we’re working out. I can see him mentally taking notes while he’s screaming out the plays and while he’s studying. His preparation is just insane.”

Sometimes other members of the group will get up early enough to work out with Hurts. Regardless, they “see him all the time,” Herbig said. He’ll either stick around when he’s done or come back later to grab a meal from Johnson’s personal chef — who has become everyone’s personal chef — or to just hang out.

The common description of Hurts is that he is a natural-born leader whom players gravitate toward. Given those qualities, some found it odd the Eagles drafted him in the second round in 2020 as Wentz was trying to reestablish himself as the front man following Nick Foles’ Super Bowl success, and amid rumblings Wentz had struggled to connect with some of his teammates. Wentz went on to have the worst campaign of his career by far, and was replaced in the lineup by Hurts for the final quarter of the season.

Coach Nick Sirianni has not publicly committed to Hurts being QB1 going forward, citing a desire to create competition at all positions. That hasn’t stopped Hurts from working to establish himself as the team’s leader, whether it be by taking guys out to dinner, demanding precise execution when throwing to his wide receivers and running backs at the local high school or by showing up at the Bro Barn day in and day out.

For an idea of how he has been accepted into a fairly exclusive offensive line fraternity, look at the artwork. Just inside the Bro Barn entrance is a mural of its patrons. The paintings surrounding it are of some of the newcomers such as Eagles center Jason Kelce and Justin Pugh of the Arizona Cardinals. In the center of the mural sits Hurts, flanked by a group of offensive linemen who, in the words of Seumalo, “have his back.”

“He doesn’t think he’s above anybody,” Herbig said. “He doesn’t work like he’s entitled to anything. He works like he owes you something. I have a lot of respect for that.”

From ‘Rocky IV’ to ‘Billy Madison’

The Bro Barn was “kind of a s—hole” when Johnson first bought the place three years ago, he said.

Part of the structure was open air, another part housed old horse stalls, the roof was no good and groundhog holes pocked the soil.

But Johnson wanted a home gym and saw potential. Desiring a personal trainer after getting bit by the injury bug, he had just hired Rangel away from music performer Adam Levine. Together, Rangel and Johnson spearheaded a six-month renovation that transformed the barn into a workout space fit for world-class athletes. A roof was put on, rubber floors were laid over poured concrete and top-end equipment was crammed in along the wooden walls.

“The only thing we’re missing is the f—ing stones and the pulleys and maybe the heater in there,” Johnson said. “But s—, I like the s— out of it.”

Profanity flows like water over Niagara Falls at the Bro Barn. That’s fine when the athletes are inside. Outside is a different story, as Johnson’s property backs up to a preschool. The children’s outdoor time coincided with the men’s Monday workout, and a teacher kindly let them know that 2- and 3-year olds were watching, and listening, through the fence.

“I feel like I’m in damn ‘Billy Madison,'” Johnson said.

Being on their best behavior doesn’t keep the NFL players from making fun of one another. Herbig is often the target. He has been known to “bust his ass” (lose his balance and fall) during box jumps, as he did Monday. He also stumbled out of the gates one time during 10-yard splits and hit the deck, drawing the biggest smiles of the day. To this group, there is no greater gift.

But Herbig has also been one of the biggest success stories of this Eagles’ offseason. He has dropped roughly 50 pounds and was on target to arrive at training camp at 325, while gaining strength. Some of those strides have been in pursuit of Johnson.

The NFL season is just around the corner. Here are the biggest questions heading into training camp and roster projections for all 32 teams. Read more »
&#8226 Full 2021 schedule | Depth charts »
&#8226 Transactions | Injuries | More NFL »

Johnson, a three-time Pro Bowler, is entering his ninth NFL season. The scars running down either side of his ankle, the result of multiple surgeries over the past year, are reminders the game is taking its toll. The plan for now is to play four more seasons, Johnson said. Teammates Kelce (33) and Brandon Brooks (31) are getting up there in age as well, and Johnson knows their window together is closing.

It’s a prideful group that has tasted Super Bowl success, followed by a bitter pill that was the 2020 season. If they’re to help get the organization back on track, and set it up well for the next era, the time is now — which might explain why Johnson has established such a frenetic pace this offseason.

“Anytime you have a season like that, there’s going to be a lot of new faces, a lot of change of scenery, a new agenda, new leadership. As I’ve gotten older, as Kelce, Brooks, Fletcher [Cox], BG [Brandon Graham], as all these guys are getting older, I see a sense of urgency to milk every last drop you’ve got out of yourself, to be the best you can for as long as you can,” Johnson said.

“Now I’m just trying to pass the torch on to these younger guys because that’s going to be the face of the Eagles in the future.”