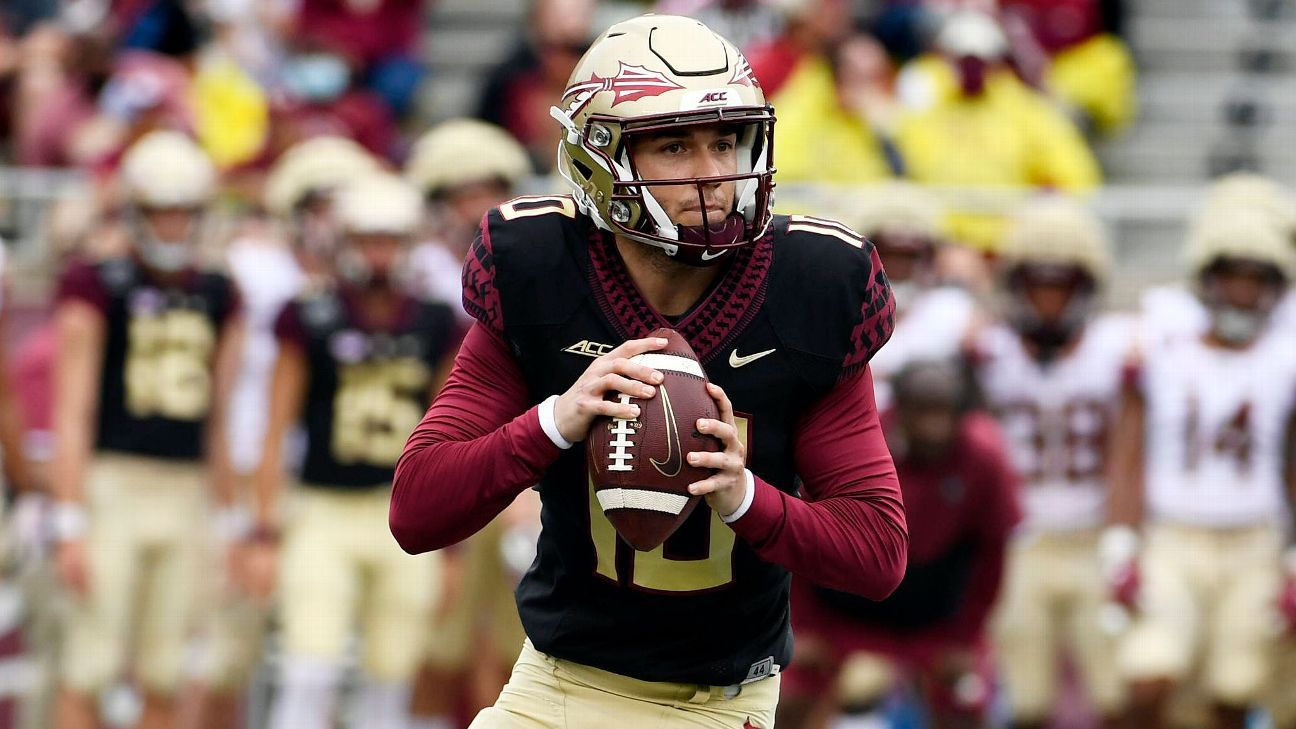 College football’s transfer portal received a lot of attention from coaches building and adding to their rosters this offseason.

It’s not the transfer market of old with players who might not make an immediate impact or any impact at all. Nowadays, more high-end athletes are entering the portal, some of whom are expected to play right away for their new teams.

With so much movement from roster to roster, we took a look at some of the more important offensive transfers and how their decisions impacted the school they left and the school they joined.

From quarterback to the offensive line, here is the chain reaction offensive players created through the portal.

How it impacts FSU: Florida State needs any and every quarterback to help its offense. Coach Mike Norvell and his staff have done a good job adding more competition to that quarterback room through recruiting and now through the transfer portal with Milton.

The staff added ESPN 300 quarterback Chubba Purdy, who flipped from Louisville and signed with the Seminoles in the 2020 class, and three-star Tate Rodemaker. Jordan Travis was already on the roster and took the majority of the snaps in 2020.

Milton gives the staff a veteran presence and a winner to help guide the younger players.

“It was a no brainer for me. When McKenzie went into the transfer portal, I believe in him, I believe in the work he puts in, watched him throughout his career,” Norvell said. “You have a conversation with him and it’s inspiring. I told him when he came here, there are no promises other than an opportunity to compete.

“That’s all he wanted and at the end of the day, he has helped our football program already.”

Norvell wants as much competition in the quarterback room as possible, and he has that now with Travis trying to hang on to a starting role, Milton trying to make a comeback from his leg injury and the young quarterbacks trying to learn and grow as well.

Whether he ends up as the starting quarterback this fall or not, his leadership and competition go a long way to the Seminoles offense.

How it impacts UCF: Because of Milton’s injury, he didn’t play for UCF last season or in 2019. Dillon Gabriel has been the starter for UCF the past two seasons and is returning again in 2021.

The Knights won’t be impacted by Milton’s departure since they have already been without him for two seasons. But if he’s returning to college football, it wouldn’t hurt to have him on the roster to compete with Gabriel, either.

How it impacts Tennessee: The Vols were hit hard by transfers leaving the program with safety Key Lawrence, linebackers Henry To’o To’o, Quavaris Crouch and J.J. Peterson, offensive tackles Wanya Morris and Jahmir Johnson and running backs Ty Chandler and Gray, among others.

Chandler has a chance at starting for North Carolina this season, and Gray should make an impact with the Sooners. They were Tennessee’s two leading rushers last season, combining for 1,138 yards and eight touchdowns on 257 attempts.

Losing both of them is a big blow to new coach Josh Heupel’s ground game. Outside of Jabari Small‘s 26 carries, no other running back had more than 10 carries in 2020.

Tennessee did, however, sign junior college running back Tiyon Evans out of Hutchinson Community College. The 5-foot-9, 225-pound back had 538 yards and nine touchdowns on 61 carries last year.

The staff also signed three-star Jaylen Wright in the 2021 class, and he’ll join Tee Hodge and Dee Beckwith as the other options at running back. Heupel is going to want to utilize the run heavily in his offense, so having either Small or Evans step up is going to be necessary.

How it impacts Oklahoma: The Sooners lost TJ Pledger, who transferred to Utah, and dismissed Seth McGowan from the team after being accused of armed robbery.

Last season, Rhamondre Stevenson, Pledger and McGowan led the team in rushing yards, but all three are gone. Oklahoma is going to need Gray to step into a leadership role and split carries with Kennedy Brooks and possibly Tre Bradford, who transferred from LSU.

The three of them should help solidify the options at running back for the Sooners.

How it impacts Nebraska: Robinson had 461 yards receiving and three touchdowns last season along with 240 rushing yards and one touchdown on the ground for Nebraska.

He’s an explosive play waiting to happen despite what his stats might say. He never really got going in Nebraska’s offense and didn’t display what he is fully capable of. Robinson was one of a few receivers to transfer from Nebraska, along with Demariyon Houston and Jamie Nance.

Losing Robinson, the team’s leading receiver last season, is a big deal, because this staff needs as many playmakers as possible on offense and Robinson could do a little bit of everything.

But other players can step in. Tight ends Austin Allen and Travis Vokolek, as well as wide receivers Zavier Betts and Levi Falck, are all back this season. The staff also brought in wide receiver transfer Samori Toure from Montana to help the receiving corps. The coaches also recruited ESPN 300 tight end Thomas Fidone Jr., who should be able to contribute early on.

How it impacts Kentucky: Robinson has been working at receiver, specifically in the slot, and has the staff excited about his potential.

He should be able to provide an immediate boost on offense and potentially special teams as well. The coaches have leading receiver Josh Ali (473 yards in 2020) and tight ends Keaton Upshaw and Justin Rigg all returning this season.

Robinson should be able to fit right in and complement those three players to help give Kentucky’s offense another dimension.

How it impacts Tennessee: As mentioned above with Gray, Tennessee was hit hard with transfers. He was a former five-star recruit who became an SEC all-freshman lineman in 2019.

Morris has played in 22 games over two seasons and has a lot of good football ahead of him. Losing him and Jahmir Johnson, who transferred to Texas A&M, as well as Trey Smith and Brandon Kennedy, who were both NFL draft picks, prove to be huge losses for the Vols.

To fill the massive voids along the line, the coaches added juco lineman Jeremiah Crawford of Butler County Community College and signed four-star William Parker in the 2021 class. J’Marion Gooch initially signed with Tennessee, but was released from his national letter of intent and committed to Missouri. Cade Mays returns as well, but losing Morris was an impactful loss for the Vols.

How it impacts Oklahoma: Morris, a two-year starter in the SEC, comes with some cache and a lot of ability. He is projected to start at left tackle for the Sooners and should help bolster the line from day one.

Oklahoma has Erik Swenson, Marquis Hayes and Tyrese Robinson all returning along the line this season. Morris and Robert Congel are the two transfers who should make up the remainder of the line.

Given what the staff brought in from the transfer portal, there shouldn’t be much of a transition period this season. Oklahoma’s offense is always explosive and the team’s strength, and there is no reason why that should be any different in 2021.

How it impacts LSU: Gilbert caught 35 passes for 368 yards and two touchdowns as a true freshman last season. He flashed what many saw in high school from the five-star recruit, but decided to opt out of the season after eight games.

LSU had known for a while there would be a possibility of Gilbert’s transfer, so when he announced his intentions, it wasn’t a shock to the coaches. Gilbert initially transferred to Florida, but then changed his decision to Georgia.

The staff didn’t add any tight ends in the transfer portal, but they signed three-star tight end Jalen Shead. Because Gilbert was a true pass catcher, LSU also signed ESPN 300 wide receivers Brian Thomas and Chris Hilton, as well as four-star Jack Bech, who could be a receiver or tight end.

Gilbert was the team’s third leading receiver with Terrace Marshall Jr. just ahead of him in receiving yards. Marshall is now in the NFL, but the team will return Kayshon Boutte, who led the team with 735 yards.

It will be difficult to replace the mismatches Gilbert would have been able to create and his natural ability, but LSU has offensive playmakers coming back this season.

How it impacts Georgia: There were some questions initially around eligibility, but head coach Kirby Smart confirmed Gilbert is eligible to play this season.

Georgia is returning quarterback JT Daniels, who had transferred in from USC and finished the season with some positive momentum in 2020. He had 1,231 yards, 10 touchdowns and two interceptions in four games last season, and Daniels is projected to be one of the top quarterbacks in college football this season.

LSU used three quarterbacks last season. Max Johnson, TJ Finley and Myles Brennan combined for 3,230 yards, 24 touchdowns and 13 interceptions in 10 games. By having one quarterback such as Daniels throwing to him, Gilbert should have an opportunity to put up big numbers for the Dawgs.

The staff also brings back its top five leaders in receiving yards with wide receivers Kearis Jackson, George Pickens and Jermaine Burton, running back James Cook and tight end Darnell Washington. Pickens tore his ACL in the offseason, so he will likely not be available the entire season.

Adding Gilbert to that group is going to make Georgia’s offense potent and will help create a lot of mismatches pairing him with Washington, who is 6-7, 265 pounds.