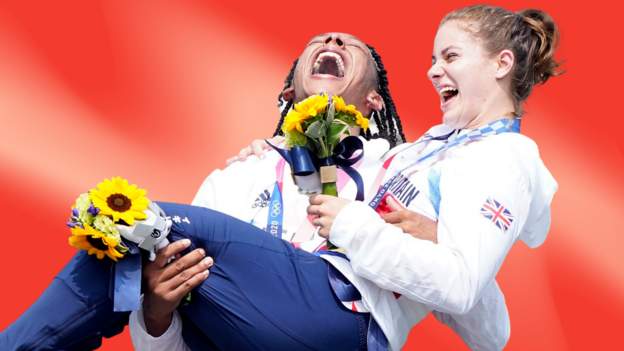 Bethany Shriever can count Liam Gallagher as a fan. The ex-Oasis frontman think she’s a “ledge” and now so too does everyone else.

Hers is a name few will have heard before Friday morning but her BMX Olympic gold, and the story behind it, means it is now one that won’t be forgotten in a hurry.

She could barely stand after ditching her bike, moments after becoming a champion. Team-mate Kye Whyte, who himself had just won silver in the men’s event, swept her up in his arms, the pair deservedly milking their moment as they became Britain’s first BMX medallists.

“I’m more happy for her than I am for me,” Whyte said. “That girl puts in some serious serious graft.”

Serious graft, and then some. For Shriever, this was a moment that looked unlikely to ever happen four years ago.

After UK Sport said in 2017 it would only fund male riders for the Tokyo 2020 cycle, based on results, Shriever left the national set-up to go solo.

Without that funding, she needed to find it elsewhere. Her parents helped as much as they could and she also took a part-time job as a teaching assistant, but still needed to crowdfund £50,000 to stand a chance of qualifying for the Olympics.

“It’s been a very long and hard journey,” she told BBC Sport.

‘We’ve done it all together’

Back home in Essex, Shriever’s parents – Paul and Kate – and her boyfriend, Brynley, had been up since 1:55. Her first semi-final run was delayed and so her siblings went back to bed for another 45 minutes kip.

The delay didn’t faze the 22-year-old though, winning all three of her semi-final runs and, when the start gate dropped in the final, she surged to the front, a lead she would never relinquish as she defeated her idol, Colombia’s two-time Olympic champion Mariana Pajon.

“It was emotional, there was not a dry eye in the house,” Kate told BBC Radio 5 Live.

“I think it was all worth it when she got the letter to say she was going to the Olympics. Anything after that was a bonus, she just wanted to race and enjoy the experience. She has loved every minute of it. We all knew no matter what the outcome was we would be 100% proud of her.”

When the family video-called their daughter later, caught by BBC cameras, she was grabbing some food with Whyte, their medals on the table next to them. “Don’t let them out of your sight,” urged Kate.

But Shriever’s medal isn’t just hers. She was quick to thank her family, one that “lives and breathes” BMX racing, according to her dad.

“It’s been something we’ve done as a family, as a unit, and it’s bonded us together,” Paul told BBC Sport. “We’ve travelled around some of the world and done it all together.”

There have been plenty of ups and downs along the way. She’s fractured her wrist three times and, in 2014, Shriever – a former junior world champion – broke her leg, only to do it again on her first training session back.

“She landed a jump and on impact the metal rod in her leg bent and shattered her leg again,” her mum explained.

“A lot of people had written off her at that point, she was a really good rider but to break her leg twice and be out of the game for about 18 months, but she was determined afterwards.”

Even coming into the Tokyo Games, the road hadn’t been smooth. She hadn’t competed in 18 months owing to the Covid-19 pandemic, and earlier this year, dislocated her shoulder in training.

‘I hope it does more for the sport’

But nothing compared to that hurdle of losing funding four years ago.

“BMX wasn’t seen as something worth investing in at that time, and so we funded it and looked after Beth and put what we had behind her,” Paul said.

“We’d do it again tomorrow. There’s no regrets and there’s no bad feelings towards anybody, we’re just over the moon that she’s kept the determination and drive to want to do as well as she can and that she’s got where she is now.”

He persuaded UK Sport to allow them to re-allocate funding, moving Shriever up to Manchester and bringing her back onto the programme.

“For Sparky to see my potential and give me a chance to be a full-time athlete shot me in the right direction,” Shriever told BBC Sport. “Look where I am now.”

She added: “I hope it does more for the sport now and in Great Britain. I hope we get more girls involved, and boys as well. Everyone proved that, if you commit to something and have fun doing it, you can be rewarded for it.”

For Park, the hope is that Shriever’s success – and that of Whyte, who hails from a Peckham housing estate – can open the doors to a new generation of cyclists.

“What we hope from a British Cycling perspective is that people can associate with a Beth Shriever or a Kye Whyte, and we’re able to broaden the diversity of the participants in cycling,” Park said.

“Whether you’re all in for the Tour de France, mountain bikes, or BMX hopefully there’s something for everyone and that draws more people in to the sport.”

He added: “I would very much hope that from a UK Sport perspective as well as a British Cycling perspective that the idea of trying… to inspire a wider population across our society is better addressed when we’ve got people winning in the different disciplines.”

Shriever and Whyte’s success may just be the catalyst for that new era of inspiration. If Gallagher said BMX racing was “blowing his mind”, then you never know who else was watching.

USA’s win over Iran a relief for Berhalter after a tense build-up that had turned bizarre
Shaw resigns after 12 seasons as Stanford coach
A guide to Michigan-Ohio State, Notre Dame-USC and the rest of Week 13’s top games
Canada sweeps singles to claim first Davis Cup
Source: Rose Bowl allows for 12-team CFP in ’24