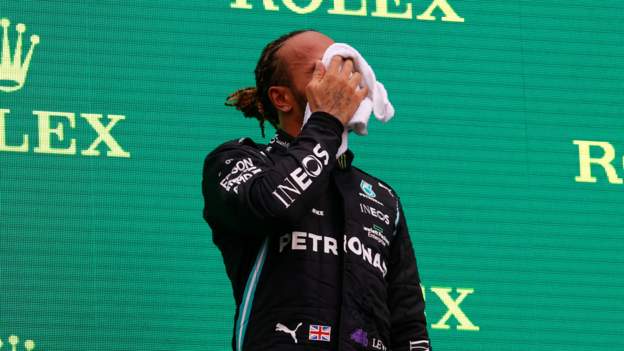 Lewis Hamilton says he has been battling with his health after contracting Covid-19 last December.

Hamilton saw his Mercedes team’s doctor with dizziness and blurred vision after finishing third in the Hungarian GP.

He said after belatedly joining the official post-race news conference: “I had really big dizziness and everything got a bit blurry on the podium.

“I have been fighting all year with my health after what happened at the end of last year and it is still a battle.”

He returned for the final race in Abu Dhabi a week later for Mercedes but admitted he was not fully healthy when he did so.

After finishing third in an eventful race at the Hungaroring, won by Alpine’s Esteban Ocon, Hamilton took part in the podium ceremony before seeking medical attention.

Hamilton said he suspected he was suffering from so-called ‘long Covid’, a phenomenon whereby people who contract the disease continue to suffer debilitating health effects for months afterwards.

“I haven’t spoken to anyone particularly about it but I think it is lingering,” he said.

“I remember the effects when I had it. The training has been different since then and the levels of fatigue you get are different and it’s a real challenge as I said.

“So [I’m] just continuing to try and train and prepare the best way I can. Who knows what it is today? Maybe it’s hydration but I’ve definitely not had that experience. I had something similar in Silverstone but this is way worse.”

Hamilton’s third place, coupled with a 10th-place finish for title rival Max Verstappen of Red Bull after the Dutchman was involved in an accident at the first corner of the race has left the Briton with a six-point championship lead heading into F1’s three-week summer break.

The season reconvenes at the Belgian Grand Prix on 27-29 August.

A further 12 races are planned but there remains uncertainty about the exact number as a result of the pandemic.