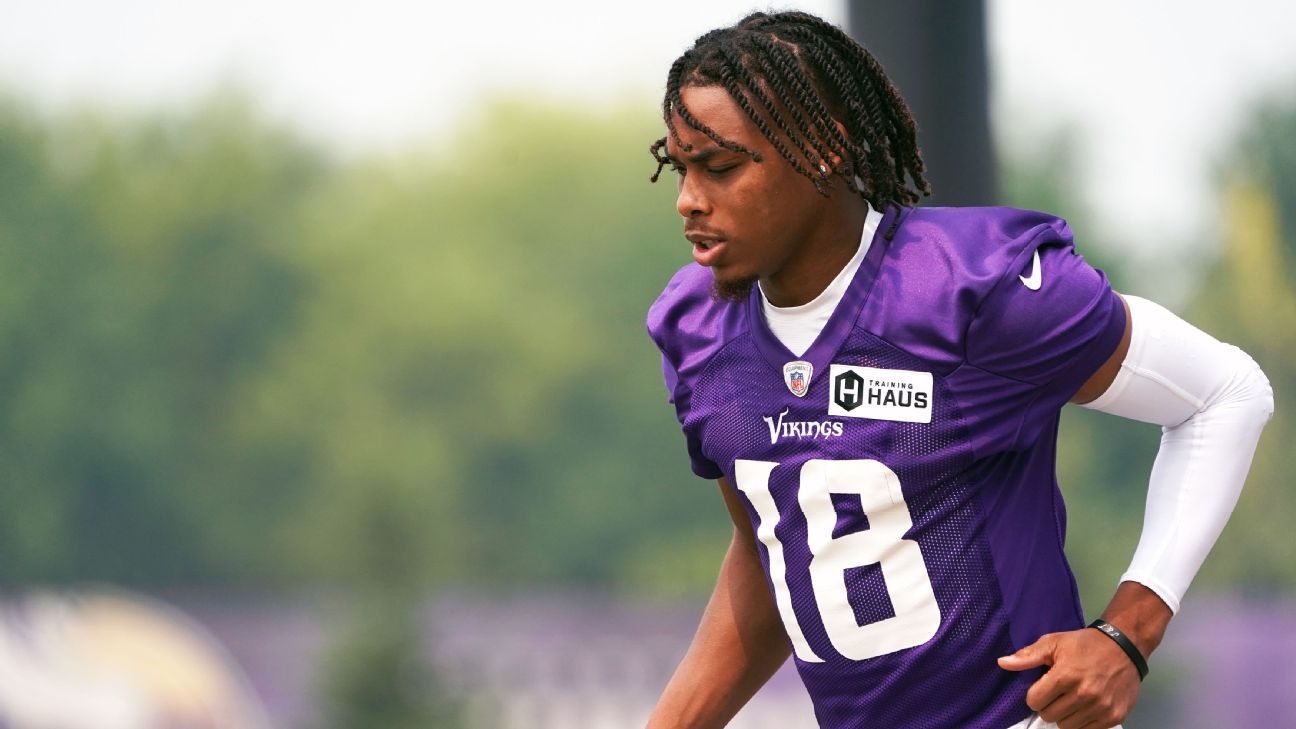 EAGAN, Minn. — Nothing went as expected for Minnesota Vikings receiver Justin Jefferson as a rookie in 2020.

His NFL career began in the midst of a pandemic that prevented him from a normal offseason. He didn’t have long to build chemistry with Vikings quarterback Kirk Cousins or learn the ins and outs of being a Pro Bowl wide receiver from Adam Thielen.

He absorbed a playbook virtually and didn’t have a preseason game to test the waters. Dealing with the fluid landscape that came with COVID-19 interruptions and distractions threw wrench after wrench into his plans.

Jefferson didn’t even start until Week 3 of the 2020 season, yet he still performed at a record pace. The Vikings’ 2020 first-rounder had a historic rookie season, breaking decades-long franchise records held by Hall of Famer Randy Moss. He finished with 1,400 receiving yards, the most by any rookie in the Super Bowl era (since 1966).

So when Jefferson, 22, talks about the expectations to top last season, it’s no surprise that the challenges of 2020 are the catalyst behind his self-assurance.

The NFL season is just around the corner. Here are the biggest questions heading into training camp and roster projections for all 32 teams. Read more »
&#8226 Full 2021 schedule | Depth charts »
&#8226 Transactions | Injuries | More NFL »

“To be honest, my confidence,” Jefferson said about what will help him combat a sophomore slump. “Me having the season I had last year with so many different inconveniences. Now going into this year, having a whole year with Kirk and the rest of the guys on this team, I feel way more confident. I feel like I’m going to do even more, better than I did last year.”

Those inconveniences didn’t slow Jefferson. By the halfway point of the 2020 season, he had put up three 100-yard receiving games. Green Bay Packers coach Matt LaFleur dubbed Jefferson a No. 1 receiver before he suited up for the eighth game of his NFL career, and praise from other coaches and players around the league ensued, often in the form of added attention from defenders.

According to NFL Next Gen Stats, 606 of Jefferson’s 1,400 receiving yards came against press coverage (less than a 3-yard cushion), the most by any player last season. He made it tough for corners to cover him one-on-one, recording 100 or more yards on seven different routes.

It’s among the first things Vikings cornerback Patrick Peterson noticed about Jefferson, whom he has known since the receiver was a preteen.

“He runs his routes like a savvy vet,” Peterson said. “He makes everything look the same. Most young guys can’t do that. I don’t know if it’s coming from LSU, being coached the right way, but he’s a guy like when I first got here, he’s a pro. When you have a guy that comes into the league at that age and gets it right away, he’s going to be very special.

“I believe it’s going to be kind of difficult to try to cover him differently this year. You just have to roll the punches and hope he drops them.”

So what’s in store for Jefferson in Year 2? Over the past 10 seasons, nine receivers finished with at least 1,000 receiving yards as a rookie. Six of the previous eight (excluding Jefferson) had 1,000 yards again in their second season.

Teams took notice as Jefferson developed into one of the most productive receivers in the league, averaging the second-most receiving yards per route run last season (2.76), behind the Packers’ Davante Adams, according to ESPN Stats & Information.

Even with the expectations that come with those numbers, the Vikings aren’t expecting Jefferson’s production to level off. In the traditional sense – receiving stats – those numbers might dip, but being the best receiver on the field could mean Jefferson is absorbing coverage to free up others.

What you need to know about the Minnesota Vikings:

“I don’t think he’s going to have any regression or whatever that is because he’s in a great frame of mind out here,” coach Mike Zimmer said. “He runs, he loves playing football, he’s running great routes. What’s gonna happen, though, is these teams are probably going to start rolling coverage to him, double coverage to him, so in some of these instances, he just can’t get frustrated because that’s happening. But it’s a good thing, if he understands that he is really helping the team an awful lot.

“Now, his numbers might be better or worse, I don’t know, but he’s helping the team because one of those guys that’s doubling him now isn’t in the box for [running back Dalvin] Cook to run against or against [tight end] Irv Smith or against Thielen to go one-on-one with. So he needs to understand that, and we’re working on some of those things, obviously not the first day, but as we start getting going here a little bit more. Part of it is just him understanding that even though they’re double-covering me, I’m helping this football team.”

The way Jefferson performed under the most unusual circumstances as a rookie gives teammates confidence that a repeat is possible. After all, if he put up a historic season with all those inconveniences, what can he do in a more normal season?

Heisman finalists include 3 CFP QBs and Williams
Rays enter bid to redevelop Tropicana Field site
Sources: Gabriel Jesus out for rest of World Cup
NBA refs are cracking down on traveling — whether teams like it or not
Hovland in position to repeat, up 3 in Bahamas