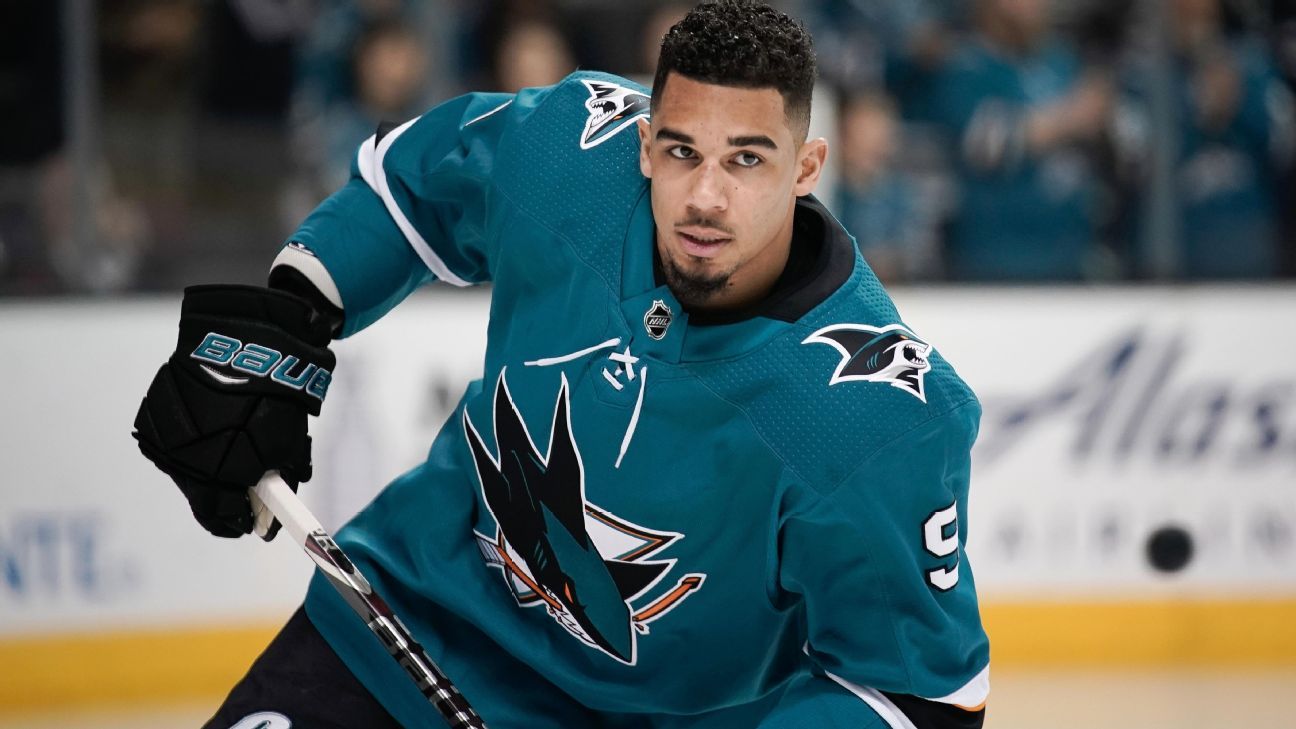 The NHL is investigating allegations made by the wife of San Jose Sharks left winger Evander Kane that her husband bet on hockey and compromised games for gambling purposes.

Kane denied the allegations and said he would cooperate with the NHL’s investigation.

What are the gambling allegations?

Saturday night on Instagram, Anna Kane alleged that her husband bet on Sharks games “with bookies” and threw games for gambling purposes. She also claimed Kane had a gambling addiction that was causing the couple hardship. In response, Kane posted on Twitter that he has never bet on hockey, including Sharks games, and has never thrown a game.

What do we know about Evander Kane’s gambling?

Evander Kane has a history with gambling. He gambled openly on table games at Las Vegas casinos. In April 2019, he failed to pay a $500,000 casino marker from The Cosmopolitan while he was in town for a playoff series against the Vegas Golden Knights. The Cosmopolitan filed a complaint in November 2019 and the case was dropped by the casino in 2020.

In January, Kane filed for Chapter 7 bankruptcy. As part of his legal filings, he claimed to have lost $1.5 million gambling “at casino and via bookie” over a 12-month span leading up to his bankruptcy petition. According to Cap Friendly, Kane has lifetime earnings in the NHL of just under $56 million. He’s three years into a $49 million contract with the San Jose Sharks and has $26 million remaining on it.

Has Kane bet on hockey?

That’s what the NHL’s investigation is trying to determine.

ESPN reached out to a few players who knew Kane or have played with him. None said they ever heard him mention betting on hockey.

“Did he like to gamble? Sure. I just don’t believe he was actually betting on hockey games,” one active player said.

A one-time teammate of Kane was surprised to read the accusations, telling ESPN that while Kane’s wagering on football and basketball were well known, “I never once heard him say he bet on hockey.”

Part of that skepticism is that betting on hockey games — through casinos or bookies — isn’t something that’s prevalent in NHL dressing rooms, according to those with whom we spoke.

“I’ve known guys that are big bettors, but I don’t think I ever heard of them wagering on hockey,” one NHL player said.

Several longtime Nevada bookmakers from multiple casinos said they had never seen or heard of Kane betting on sports in town. There are many more sportsbook options than just in Las Vegas, of course, including local and offshore bookmakers who could offer more anonymity than the regulated U.S. betting market.

Kane also could have employed a “beard,” a term used to reference a person who places bets for someone else.

What are the NHL’s rules in regard to players betting on hockey?

The NHL’s collective bargaining agreement doesn’t leave much gray area. In the “Standard Club Rules” section, the second item listed states: “Gambling on any NHL Game is prohibited.” That rule is also posted in every dressing room around the league.

According to the NHLPA, players are allowed to wager on any sports outside of hockey.

NHL commissioner Gary Bettman is empowered by the CBA to impose discipline on any player for violating an off-ice league rule (i.e. something other than the rules of play) or a player guilty of conduct that’s “detrimental to the welfare of the league or the game of hockey.” The CBA spells out three forms of punishment for the commissioner to dole out: Imposing a fine that’s capped at $10,000 for a first-time offender; cancelling the player’s contract with his team; or by expelling or suspending the player “for a definite or indefinite period” from the NHL.

As for the NHLPA, it has a player assistance program that includes a hotline that allows players to confidentially connect with counselors, including ones for gambling addiction.

Kane isn’t the first NHL player to ring up significant gambling losses. The legendary Jaromir Jagr owed more than $500,000 to an Internet gambling site back in 2003. Thomas Vanek owed hundreds of thousands of dollars to a bookmaker for betting on football and basketball games — although not the $10 million that the bookie’s lawyers claimed in court. Neither player was punished by the NHL because they didn’t cross the uncrossable line: betting on hockey.

Like many others, the league was caught off guard by the news. There isn’t a task force that handles matters involving players wagering on the NHL. The investigation team will be assembled by Jared Maples, the former head of the New Jersey Office of Homeland Security who took over as the NHL’s executive vice president and chief security officer in May. They’ll look for any paper or electronic trail that could connect Kane with a wager made on an NHL game.

While the accusations are serious — as evidenced by the rapidity of the NHL’s statement on Saturday — the investigation could take a while. It’s the offseason, so there’s not a sense of urgency regarding Kane’s status for the 2021-22 season and beyond. But the expectation is that the investigation will be completed by training camps in September.

Is it possible for a left wing to throw a hockey game?

There are certain position players in every sport who directly influence the result of a game, like a pitcher in baseball, a quarterback in football or a goaltender in hockey or soccer. Their time in the game is significant, and their “mistakes” can directly lead to an opposing team’s success.

ESPN asked one active NHL player if a forward could exude that much influence. His response? “Time on ice and line changes.” In other words, a player like Kane doesn’t have nearly as much influence. The average starting pitcher in baseball plays around five innings, over half the game; in 2020-21, Kane averaged 20 minutes and 12 seconds, or just over a third of regulation.

Another player said of the notion of match fixing in the NHL: “I don’t think that’s ever happened and I don’t think anyone would ever do that.”

But there are ways for an NHL skater to influence the outcome of a game. Like blowing a defensive coverage or taking penalties to put their team at a manpower disadvantage, perhaps at inopportune times. Kane, we should note, was whistled for more minor penalties (89 in 195 games) than any other player in the NHL over the past three seasons, something he has chalked up to on-ice officials holding a bias against him.

Hockey is a low-event sport. Teams averaged 2.94 goals per game last season. But teammates can cover for mistakes. A penalty kill can turn a game around. A goaltender can come up with a big save. Hockey is a team game, which is why game-fixing would seemingly need to be a team effort.

Most recently and infamously, there was a match fixing scandal in the Belarus Extraliga Championship in 2019. Dinamo Molodechno held a 5-1 lead over an inferior opponent, Mogilev, which rallied for a stunning 6-5 win. The Prosecutor General’s Office began a criminal investigation that centered on four Dinamo Molodechno players for match fixing — including Alexei Ivanov, the team’s goaltender. The International Ice Hockey Federation suspended six players involved in the conspiracy, all of whom admitted that “they had agreed to exert an unlawful influence on the outcome of the Game in exchange for illegal remuneration.”

How much is bet on hockey in the U.S.?

Hockey doesn’t generate nearly the amount of betting interest as football, basketball and baseball in the U.S. In Colorado — one of the only states with a regulated betting market that tracks wagering on hockey — $73.2 million was bet on ice hockey from January through June, the six months spanning the NHL regular season. In comparison, during that same time frame, $530.2 million was bet on professional basketball with Colorado sportsbooks.

Betting limits on hockey, due to the size of the market, are typically smaller than those of other sports as well. Six-figure bets on the NHL, while increasing, are extremely rare, especially compared to other sports.

What is the NHL’s current relationship with gambling?

In 2016, Bettman said that hockey “doesn’t lend itself to gambling in the same way football and basketball do” and expressed concerns about gambling’s impact on the “family friendly” environment of NHL games. Three years later, after the U.S. Supreme Court’s decision nullified the Professional and Amateur Sports Protection Act to usher in unprecedented levels of legalized sports wagering around the nation, Bettman sang a different tune. “I owed it to our fans, I owed it to our clubs, to embrace the evolving world, whether it’s sports betting or changes in technology. In this day and age, you either evolve or become extinct,” he said at a conference held by the American Gaming Association.

Since 2019, the NHL has forged partnerships with several sportsbooks. It’s first deal was with MGM Resorts, following with partnerships with DraftKings, FanDuel, William Hill, PointsBet and Bally’s, among others. The NHL’s individual teams have also forged interesting partnerships. Witness the Washington Capitals‘ ownership transforming a sports bar chain restaurant into a William Hill Sportsbook, the first located inside a U.S. sports arena.

The next horizon for the NHL and sports wagering is puck and player tracking. After some technical challenges last season, plans are for it to make an impact in the 2021-22 campaign. The data generated by the tracking sensors — and licensed to bookmakers like MGM — is expected to create an entirely new subset of wagers on the NHL, from betting on the distance traveled by players to the velocity of shots to the location on the ice where the next goal is scored.

“Our original goal in creating this technology was to create a broadcast enhancement that can be used in real time, which no other sport has. While not developed with this in mind, the application to sports gaming could create even more fans,” Bettman said.

How can sportsbooks prevent athletes and team staff from betting on events in which they participate?

It’s challenging. While leagues and gaming regulators have rules prohibiting players from betting on associated games and events, enforcing those rules is difficult. Nevada Gaming Control regulations prohibit bets placed by or on behalf of an official, owner, coach or staff of a participant or team or participant in that event and requires licensees to take “reasonable steps to prevent the circumvention of this regulation.”

However, sportsbook employees may not recognize a player who comes to the betting window, and the use of beards, as mentioned above, is a common practice.

Conscious Gaming, an organization dedicated to responsible gaming practices, offers a technology, known as PlayPause, that helps identify prohibited bettors, but no sports league, including the NHL, has agreed to provide the needed information to the platform, a spokesperson for the company told ESPN.

How the US, Iran match up on the pitch as tensions rise off it
Germany stunned by Japan in latest World Cup shock
“Wait For Right Time…”: Anurag Thakur On Ramiz Raja’s 2023 World Cup Warning
New Zealand-India Second ODI Abandoned Because Of Rain
Teixeira on declining title shot: ‘Need more time’