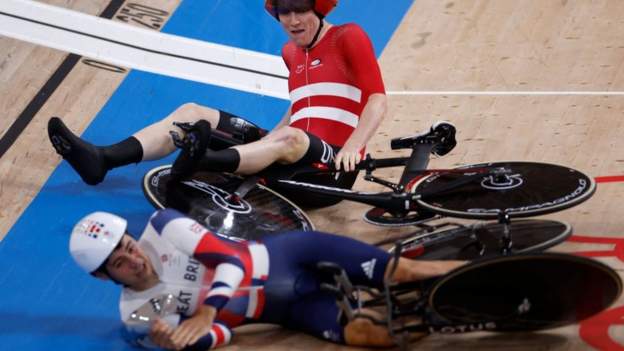 Great Britain’s reign as Olympic champions in the men’s team pursuit came to a controversial end during Tuesday’s semi-final with Denmark at Tokyo 2020.

Hope of a fourth straight gold ended with a bizarre crash caused by Danish rider Frederik Madsen, who reacted angrily despite being at fault.

That came after GB had called for the Danes to be disqualified from the event over a separate issue and GB veteran Ed Clancy announced his sudden retirement.

A team pursuit is technically over if one team catches another on track but Madsen rode straight into the back of Clancy’s replacement Charlie Tanfield having not seen the GB rider.

Cycling’s governing body, the UCI, deliberated for half an hour before announcing that Denmark would advance to Wednesday’s final against Italy, while GB’s men will miss out on a team pursuit medal for the first time in six Games.

British Cycling performance director Stephen Park also confirmed they were one of “several” teams to call for the Danes to be penalised for the use of illegal equipment in Monday’s qualifying session.

The world champions wore plasters on their shins in a bid to improve their aerodynamics, while apparently wearing undervests which had not been properly registered in time.

Park said that at a meeting of teams before Tuesday’s cycling session, the UCI confirmed the equipment could not be used for the rest of the competition but indicated there would be no retroactive punishment, despite rules saying a team should face elimination in such circumstances.

“There was a fairly heated debate about whether the UCI were or were not going to apply their own rules about [the tape] and about undervests,” Park said.

“A number of the teams, including ourselves, have gone to huge lengths to make sure we are legal and have checked every single item with the UCI, as required by the regulations before we got here.

“Not surprisingly, us and them are pretty disappointed that now there are teams turning up using undervests that are not part of the equipment registered.”

Immediately after the crash, Madsen, 23, shouted at Tanfield as the British rider lay on the inside of the track and swore towards his own team-mates as he walked away.

Tanfield, 24, was only racing after being called up to replace Clancy, the only ever-present for GB’s three men’s team pursuit titles.

The 36-year-old rode in Monday’s qualifying session but announced his retirement before Tuesday’s semi-final after the recurrence of a back injury.