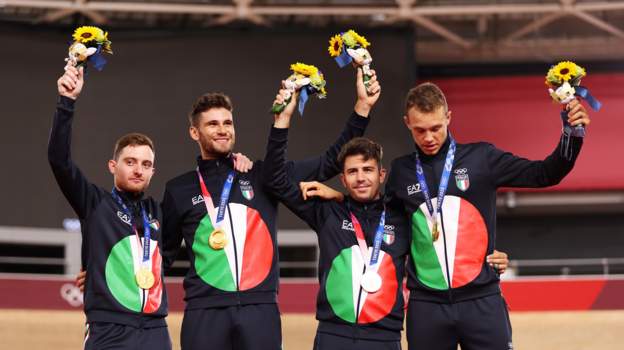 Italy broke their own world record to be crowned men’s team pursuit Olympic champions for the first time in 61 years at Tokyo 2020.

That was just 0.166 seconds quicker than world champions Denmark.

Italy are now eight-time champions in the event but had not won since the Rome Olympics in 1960.

Italy’s victory ended the reign of Great Britain, who had been the team pursuit gold medallists at the last three Olympics.

Earlier on Wednesday, the Team GB line-up of Ethan Hayter, Charlie Tanfield, Ethan Vernon and Ollie Wood – all making their Olympic debuts in Tokyo – set a new national record of 3:45.636 to finish seventh.

They missed out on a place in the medal races after a controversial crash during Tuesday’s semi-final against the Danes.