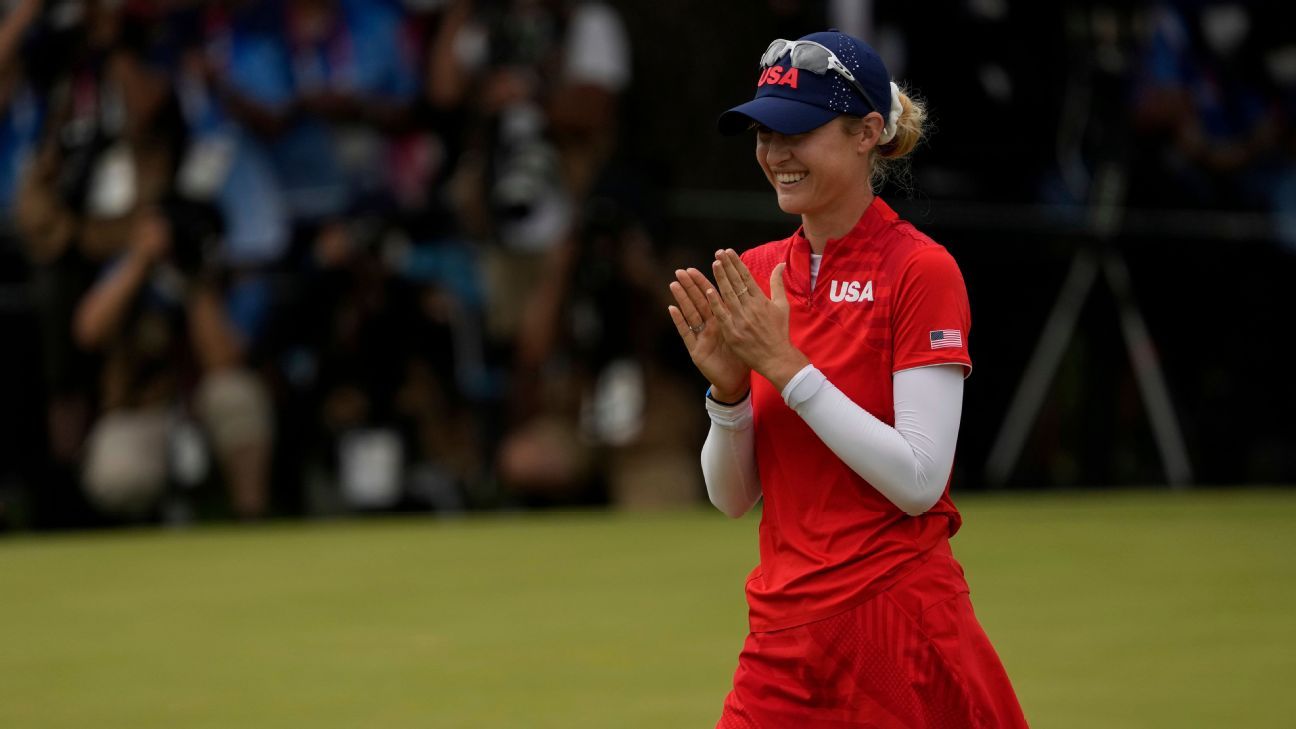 Before Team USA’s Nelly Korda teed off in the final round in the women’s Olympic golf competition at Kasumigaseki Country Club, gold medal winner and fellow Team USA member Xander Schauffele tweeted her a special message: “Bring home the gold @NellyKorda! I’ll be rooting for you tonight.”

For 54 holes the No. 1 ranked player proved her dominance on the course. Heading into the final round, she led by three shots and maintained a level of calm that no other player seemed to match. Before the final round started, it presented a series of unknowns, including whether the 60-player field would be able to finish 72 holes due to a looming tropical storm. But it felt like among all the unknowns, one thing was clear: Korda came to win gold.

Even as player after player attempted to cozy up next to Korda on the leaderboard, she held her own. She played her game. She did what she did best. She remained calm.

“I’ve been actually really calm the last three days,” she said after the third round. “I haven’t really gotten nervous.”

For 72 holes, her game spoke for her: I’m No. 1 for a reason. When Korda sank her final par putt on the 18th hole, she said it all again without saying anything. She deserved to be there. She earned it. This gold medal was hers.

“It feels amazing,” Korda said. “Lydia [Ko, who took bronze for New Zealand] was playing really well, so was Mone [Inami;, who won silver for Japan]. They both played super well, so we were all bunched up there. It was very stressful, but I kept it together, I fought pretty hard.

“I’ve had a pretty good stretch of events, but it doesn’t mean necessarily that you’re going to play well, so you kind of try to put the expectations to the side and just go out and have a nice fresh week, enjoy the Olympic experience because it’s such a unique and fun experience now doing it for the first time. And as Lydia said, you play for more than just yourself, you also play for your country. So safe to say I really enjoyed my first Olympic experience.”

It’s only been a few months since Korda claimed the No. 1 ranking in the world. After winning her first major at the KPMG Women’s PGA Championship at the end of June, Korda ascended to the No. 1 spot in the Rolex Women’s World Golf Rankings. In doing so, Korda became just the third American to hold the No. 1 spot since the rankings were introduced in 2006. Stacy Lewis was the last American to claim No. 1, for four weeks in 2013 and 21 weeks in 2014. Prior to that, Cristie Kerr held the spot for five weeks in 2010.

Since her rookie season in 2017, Korda has captured six wins, including one major. Although it’s been no surprise that Korda has been successful, this year, she is demonstrating a new kind of dominance.

A dominance that we haven’t seen from an American player.

A dominance that won gold at her first appearance at the Olympics.

A dominance that won Team USA’s first medal in women’s golf since 1900 (golf returned to the Olympics in 2016 after a 112-year absence; no Americans stood on the podium in 2016).

A dominance in being the first player (man or woman) to win a major and the Olympic gold medal in the same year.

Korda’s win gave the U.S. a gold-medal sweep in golf at these Games. In total, the U.S. had four men and four women in the top 15 in each of the golf competitions.

“This is total GOAT status for me,” Jessica said about her sister’s year.

Even with a gold medal around her neck and her recent accomplishments on Tour, Korda is still looking ahead and trying to figure out how to continue moving forward, how to keep hold of that No. 1 ranking.

“With sports it’s so different because you’re constantly looking ahead,” Korda said. “It never really gets to kind of sink in. I think I’ll look back at the season after the season is done, but right now there’s still a lot of big events coming up. When I do look back it’s just crazy.

“My parents always say that I’m a lion because I’ve always, ever since a young age, I’ve always been super-determined and super-focused on what I want.”

Right now, for both American and women’s golf, Korda is leading the pack. And she’s not looking back.