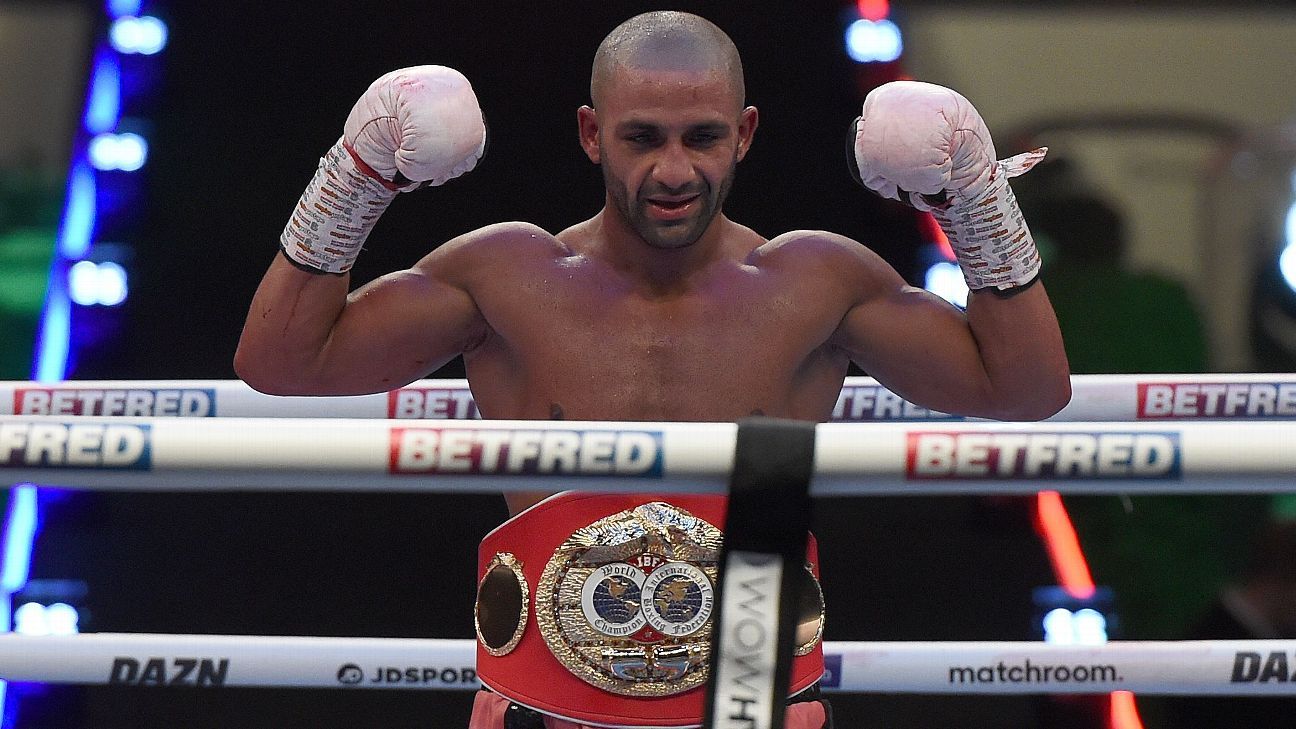 Kid Galahad picked apart James “Jazza” Dickens to force a stoppage at the end of 11 rounds and win the IBF world featherweight title on Saturday.

Galahad outpunched and outthought his English rival to lift his first world title in the garden of the offices of promoter Matchroom in Essex, England.

Galahad (28-1, 17 KOs), 31, from Sheffield, also beat Dickens in a 10th-round stoppage for the vacant British junior featherweight title in September 2013. Eight years on, and Galahad was still superior in a sharp display despite an 18-month layoff.

“I have been waiting 19 years for this,” Galahad told DAZN. “I’m going to dominate this division.”

Both were trying to win a world title at the second attempt, and it was Galahad who succeeded in resounding fashion after he lost to English rival Josh Warrington by split points decision for the IBF world featherweight title in June 2019.

Galahad captured the same IBF belt after Warrington relinquished the belt earlier this year. Warrington was ringside to see Galahad’s crowning moment, and will attempt to revive his career against Mexico’s Mauricio Lara, who he suffered a shock ninth round stoppage loss to in February.

Dickens (30-4, 11 KOs), 33, from Liverpool, started aggressively and landed a decent right hook in the third round, but Galahad steadily began landing more.

Dickens, who suffered cut above his left eye in the first round from a clash of heads, could not impose himself on Galahad in the early rounds and in the fifth round Galahad landed more accurate punches to increase his control of the fight.

Galahad — whose real name Abdul-Bari Awad – was really impressive in the eighth round as he continued to dismantle Dickens with accurate punches.

Dickens, who suffered a broken jaw in a two-round loss to US-based Cuban Guillermo Rigondeaux for the WBA junior featherweight title five years ago, bravely battled on but by the eighth or ninth rounds his face was looking badly busted up. Galahad’s white shorts were smeared with Dickens’ blood by the later rounds as his volume of punches took its toll on the Liverpool boxer, who finished the fight with his left eye swollen shut.

Galahad was docked a point for a low blow in the tenth, but it was never going to influence the outcome of the fight. Galahad landed 151 to Dickens’ 74 power punches, according to DAZN.

Galahad’s triumph is the latest development in the featherweight division, which has been turned on its head this year after Warrington was beaten and China’s Xu Can, the WBC champion, was knocked out in the last round by England’s Leigh Wood in a big upset last weekend.

Galahad was discovered by his trainer Dominic Ingle’s father Brendan, the revered trainer originally from Ireland who died in 2018. Galahad is the fifth protégé of Brendan Ingle to win a world title following the success of Johnny Nelson (cruiserweight), Naseem Hamed (featherweight), Junior Witter (super lightweight) and Kell Brook (welterweight).

“Brendan said I would be world champion at multiple weights,” Galahad said. “If I didn’t meet Brendan, I would probably be locked up in jail.”

Gobert tossed for tripping OKC’s Williams in loss
England Sense Lead Despite Three Pakistan Centurions In First Test
Fury is the king of boxing, inside and outside the ring, what’s next?
Dutch Grand Prix: Formula 1 extends contract until 2025
Heat’s Butler returns from 7-game absence