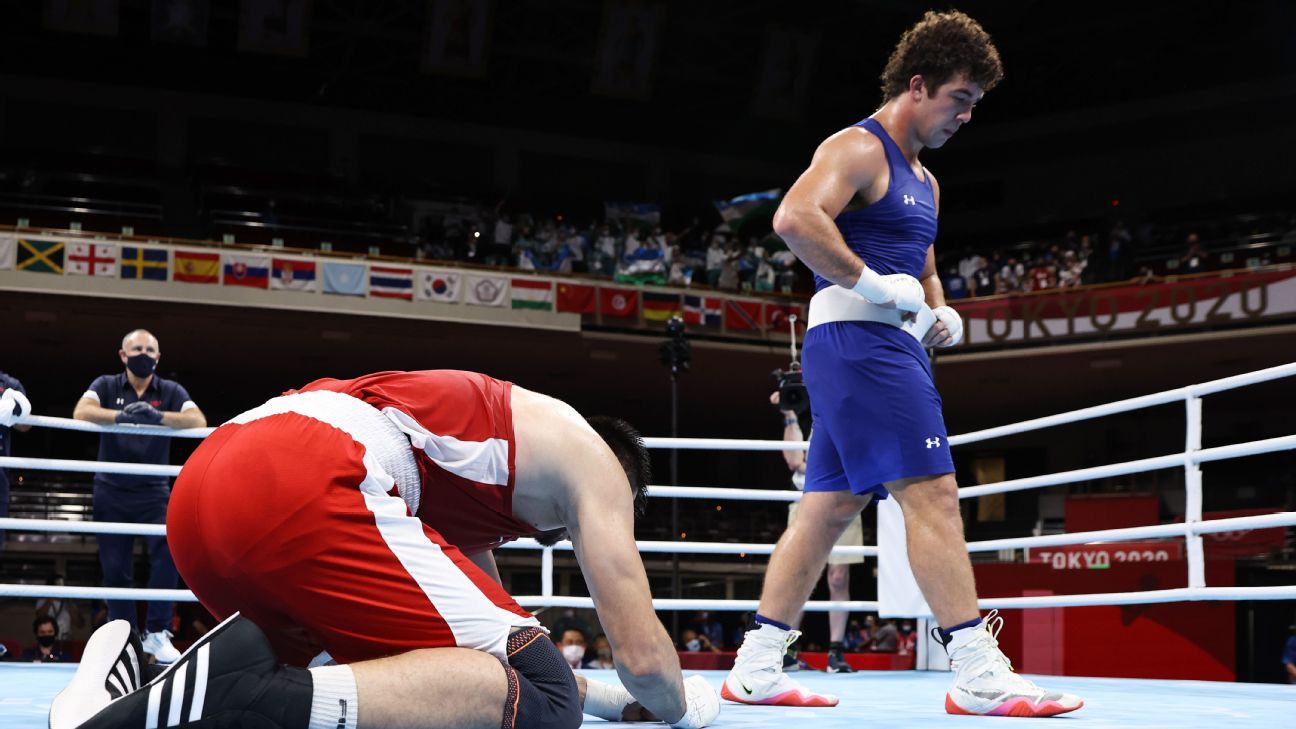 The 17-year gold-medal drought for USA Boxing’s men continues after a pair of losses Sunday morning at the Tokyo Olympics.

First, it was Keyshawn Davis who settled for silver after dropping a split decision to Andy Cruz of Cuba in the lightweight gold-medal match.

Then, with one last chance to end the spell, Richard Torrez Jr. was turned back by Uzbekistan’s Bakhodir Jalolov via unanimous decision one hour later in the super heavyweight final.

The last male boxer to win gold for Team USA: Andre Ward in Athens, Greece, in 2004.

Even without the gold, it was Team USA’s best finish since 2000. Three American men claimed silver (Duke Ragan at featherweight is the other), and Oshae Jones won bronze in the women’s welterweight tournament. The four medals at the 2020 Olympic Games are the most for Team USA since 2000 in Sydney.

Torrez, the first super heavyweight to represent Team USA in the bout since Riddick Bowe in 1988, surprised by advancing so far but was no match for Jalolov, a stronger, bigger fighter who is now 8-0 (all KOs) in the pros.

When they fought in 2019, Jalolov scored a brutal knockout of Torrez, sparking outrage in the boxing industry. After all, Jalolov was a pro and Torrez an amateur. The American was unconscious and taken out on a stretcher. Two years later, Jalolov was the winner once again, but Torrez made it a lot tougher.

Torrez landed a powerful overhand left in the opening round Sunday to win the frame on three of five scorecards. He showed courage, too: Not only was he undersized (5 inches in height and many more pounds), but he, of course, knew what happened the most recent time they met.

Still, Torrez swarmed and swarmed, before a catastrophic Round 2 did him in.

The 22-year-old from Tulare, California, received a standing eight count in the second after absorbing a powerful left hand. Moments earlier, he was deducted one point for repeatedly putting his head down. That meant he would have to score a knockout to win.

Torrez, unlike Davis and Ragan, isn’t a pro, but you couldn’t tell from this three-round fight. His left eye cut, he continued to press the action in the third, trying to close distance to land that overhand left. Jalolov, 27, kept him at bay with his southpaw jab.

With his lifelong dream achieved, Jalolov will now turn his attention to the pros. A two-time world amateur champion and now Olympic gold medalist, he has the resume. He also has the size at 6-foot-7, 250 pounds.

“His No. 1 goal even after I signed him was the gold medal,” Jalolov’s promoter, Lou DiBella, told ESPN. “I’ve been thinking for a long time he’s the best heavyweight prospect in the world, period. He’s going to need a little bit of time to truly adjust and commit to the pro game.

“The sky is the limit for this guy; his skill set is completely unique for a man his size. His movement and agility combined with a stiff long jab and one-punch devastating power, he has pretty much everything you’d want in a heavyweight contender. And I don’t think it’s going to be a long road for him to be a world-ranked guy knocking on the door of a belt.”

The first lightweight to represent Team USA in the Olympic gold-medal match since Oscar De La Hoya won gold in 1992, Davis simply ran into a rival he can’t beat.

This was their fourth — and final — meeting in the amateurs, and each time, Cruz had his hand raised. The 25-year-old Cruz was simply too sharp, too active and too good for Davis, but the fight was far closer than their last meeting, a September 2019 bout in the AIBA World Championships in Russia.

One judge scored it 29-28 for Davis, while four judges scored the fight 29-28 for Cruz, who earned the split-decision victory and the gold medal.

Cruz danced his way to the ring and then won the first round on four of five scorecards with crisp, clean punching and superior activity. Davis, of Norfolk, Virginia, stormed back to win the second, punctuated by a powerful right hand, setting the table for a third round that would decide the victor. And Cruz wouldn’t be denied, outhustling Davis and outmaneuvering the American with beautiful footwork for his 27th consecutive victory in the amateurs.

It’s unclear where Cruz, 25, goes from here. Cuba doesn’t allow its fighters to turn pro, and those who wish to do so are forced to defect. Former pro champions Erislandy Lara and Guillermo Rigondeaux both escaped Cuba and settled in Miami. For Davis, the path is far more clear: a return to the pros, where he’s 3-0 (with two knockouts) and seemingly on the fast track to a world-title opportunity.

The 22-year-old southpaw made his pro debut in February and fought again in April and May. His quick rise was put on hold when he surprisingly received the call to return to the Olympic Training Center after the cancellation of the qualifiers in Buenos Aires in May due to COVID-19.

Davis was prepared to head to Japan last summer before the pandemic delayed the Olympics one year. Rather than wait, Davis and two others — Ragan and Troy Isley — decided to turn pro. All three represented Team USA in the Olympics, the first time pro boxers have represented the nation in the Games.

Everything we’re excited for in bowl season
Johnson-Moraes to headline ONE debut in US
Cavaliers’ Wade out month with shoulder sprain
Off the bench, Ronaldo can help Portugal in a way he refused to at Manchester United
Wings’ Bertuzzi out 6 weeks after hand surgery