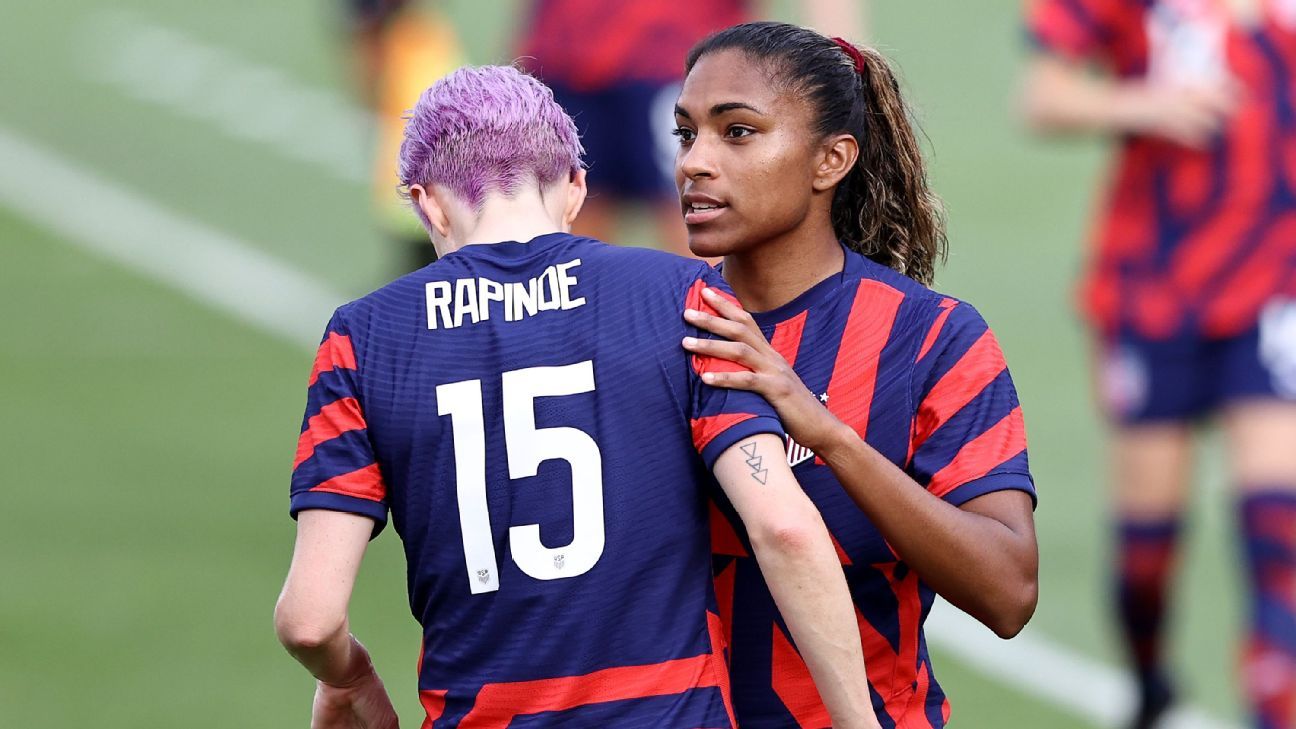 The U.S. women’s national team will leave the Tokyo Olympics with a bronze medal in hand, and a final performance that looked a bit more like what we all expected to see from the No. 1-ranked team in the world.

The bronze medal game was the first in Japan in which some players stepped up and played the saucy, spicy brand of soccer the talented and confident Americans are known to play. As late as it came, it may have been enough to convince many pundits, fans and perhaps even U.S. Soccer executives to pull their hand away from the panic button.

Yet, even if a bronze medal is still an achievement worth celebrating, it’s a disappointment for the U.S., who expect to reach the final of any major tournament. What’s more, the USWNT’s other games throughout the tournament can’t simply be ignored — problems emerged in need of corrective action.

So what comes next for the USWNT after a tournament that ended on a positive note but will ultimately be viewed as subpar at best?

Should Andonovski keep his job?

U.S. coach Vlatko Andonovski arrived in Japan with no international tournament experience under his belt — not as a player, not as an assistant coach and not as a head coach — and he often coached like it. His substitutions regularly seemed to have little to do with what was happening on the field and more to do with pre-planned rotations, which may have ultimately contributed to a lack of team chemistry. When the USWNT was getting overrun or held at bay, not enough changed after Andonovski spoke to them during hydration break huddles or halftimes.

In a counterintuitive way, however, the USWNT’s third-place finish at the Olympics probably hasn’t changed many minds on Andonovski. For the people who questioned his hiring initially, a bronze medal and uninspiring play was just further proof he is not ready for the international level. For those who cheered his appointment, they’ve likely seen enough that they still want to see how he steers the transition of the team, and they’ll pin his troubles on veteran players who will be phased out anyway.

After all, it’s not as if Andonovski missed something obvious — many of the USWNT’s problems in this Olympics seemingly came without warning. The primary pre-tournament criticism — if not the only criticism — was that Andonovski picked a roster that’s too old, but such nitpicking lacked the context that the USWNT’s older players are still capable of playing like world beaters, as they showed with moments of individual brilliance in the bronze medal game. Amid a pandemic, opportunities to scout new players were also limited, so there was realistically only so much Andonovski could do.

Kate Markgraf, U.S. Soccer’s general manager overseeing the women’s program, hired Andonovski because she thought he would help the USWNT evolve, and it wouldn’t be surprising if she still thinks so. But even if U.S. Soccer brass agreed that they need a coach with more international expertise, who could replace him and how quickly could the new coach start? With the Olympics being pushed back a year, time is less of a luxury, and the 2023 World Cup is coming faster than it may feel right now. A better coach candidate just may not emerge before the World Cup.

Unless Markgraf fears for her own job — we haven’t yet seen U.S. Soccer’s new CEO, new board president and new general managers fire anyone, so it’s unclear what it would take — then U.S. Soccer will probably trust Andonovski has learned from his mistakes during the tournament and keep him on board. Whether that’s the right call won’t be clear until 2023.

Turning the page on the USWNT roster

Carli Lloyd has a reputation for never quitting, and she’s the type to train even on vacation. After the semifinal loss to Canada, she stayed out on the field after her teammates had already dispersed, and she ran sprints. She said it was to prepare for the bronze medal game, in which she eventually scored two goals, one the game winner.

The 39-year-old seems like the type of player who would try to keep going and attempt a Formiga-esque record. But lately, she’s also been talking about the being ready for the next phase of her life. At some point, it’s time to stop. So, with Lloyd, 36-year-old Megan Rapinoe and 36-year-old Becky Sauerbrunn all possible considerations for retirement, some roster turnover is expected.

Then there will be harder decisions. Tobin Heath will be 35 by the time the 2023 World Cup rolls around. Kelley O’Hara will be nearly 35. Alex Morgan and Christen Press will be 34. They haven’t shown any signs of slowing down and, to date, there haven’t been any youngsters ready to push them out. But a disappointing Olympics, both in play and the final result, may embolden the coach to start looking ahead.

Waiting in the wings are talented forwards like Sophia Smith, Ashley Sanchez, Trinity Rodman and Ashley Hatch; midfielders like Catarina Macario, Jaelin Howell, Andi Sullivan and Brianna Pinto; and defenders like Emily Fox and, if played there, Midge Purce and Hailie Mace.

Jill Ellis caught some flak after the 2016 Olympics for cutting veterans and giving young players starts in their very first camps with the USWNT — many of those newbies didn’t stick around, and that’s not how the USWNT usually did things. Earning a starting spot was always hard, and players like Morgan and Sydney Leroux were relegated to super-sub roles long after it was obvious they would become important starters for the team.

But as complacency seemed to creep in during the Olympics, it’s clear that even if the veterans keep their spots on the team, they need some genuine roster competition and they need to feel like they must fight to keep their spots. The young players can only state their cases if they are given a real shot and a chance to develop in the USWNT environment.

Not all of these young players in the pool will make it. Some will need more time, and some will never hack it at the senior USWNT level. But now is the time to get some answers before 2023 and begin the regeneration process.

When the USWNT lost to Sweden in the quarterfinal of the 2016 Olympics, it was the team’s earliest exit from a major tournament in its history, and an embarrassment for Ellis, who had won a World Cup the year prior. Even worse, Ellis knew beforehand exactly how Sweden would do it.

“They will park the bus,” she said the day before the game. “They will sit as low as they possibly can and then look to transition, and they’re going to try to kill the game off that way and not give up space. I imagine they’ll play a 4-5-1 and be very compact.”

She called it, and yet the USWNT still couldn’t beat it.

That loss set off years of experimentation from Ellis, who became fixated on uncovering ways to circumvent teams that bunker against the United States. After all, the bunker was often used by bad teams against the USWNT in an act of desperation, and her team was usually able to overcome it. But when Sweden, a good team, clung to that strategy, a new and more tactically savvy blueprint for beating the USWNT had emerged.

Ellis’s experimentation got ugly at times. The trial of a three-back formation, for instance, resulted in a 3-0 loss to France in 2017 — at the time, the USWNT’s worst loss in a decade. But ultimately, she found her answers and the USWNT won the 2019 World Cup.

So, when Andonovski arrived in Japan, Sweden gave him something different: the players pressed like crazy — it was the anti-bunker — and the USWNT was helpless to wrangle free from it. Andonovski and the USWNT had spent months before the Olympics drilling on the ways to break down low defensive blocks — the tactic they were most used to encountering — and they looked shellshocked by Sweden’s aggressive press, particularly because Sweden was brave enough to do it in the middle of a major tournament.

Kathleen McNamee explains how the USWNT can benefit from the Olympics despite falling short of gold.

Now, the USWNT needs to evolve, and quickly. Sweden laid down the new blueprint, so no longer will teams sit back and show deference to the Americans. Opponents aren’t going to automatically play conservatively against the USWNT, as was often the case in the past in tournaments; now that the opposite has been proven to work so well.

How exactly that evolution should look will require the same messy experimentation Ellis engaged in, and it will depend largely on the types of players the coach will bring in. The system should fit the USA’s best players, and when changing tactics, it’s easy to introduce new problems while trying to fix another.

For instance: Is the USWNT’s 4-3-3 setup sufficient to control the midfield, or should it move to a system with four midfielders? Should that look like a flat 4-4-2, or feature a diamond midfield? If Andonovski tries a diamond midfield, which is inherently a narrower setup than it plays now, will the USWNT have the full-backs in the future to add the needed width? These questions can continue endlessly — one answer leads to the next question — but the U.S. can only find the optimum approach that weighs all factors through focused and determined on-field tests.

Such trial-and-error may lead to losses, of course, and those losses may only serve to embolden Andonovski’s critics if he remains in the job. But if Andonovski can borrow from Ellis’s playbook and do it anyway, critics be darned, the USWNT will be in a much better position heading into the 2023 World Cup than it was when it arrived in Japan on a 44-game unbeaten streak.

RFU ‘asleep on the job’ in wake of crises – MP
LeBron returns, teams with AD to lead Lakers’ win
Shakib Al Hasan Returns As Bangladesh Name Squad For India ODIs
Shaw resigns after 12 seasons as Stanford coach
“There’s Never A Need To Talk To Him”: Shubman Gill On India Star After 2nd ODI