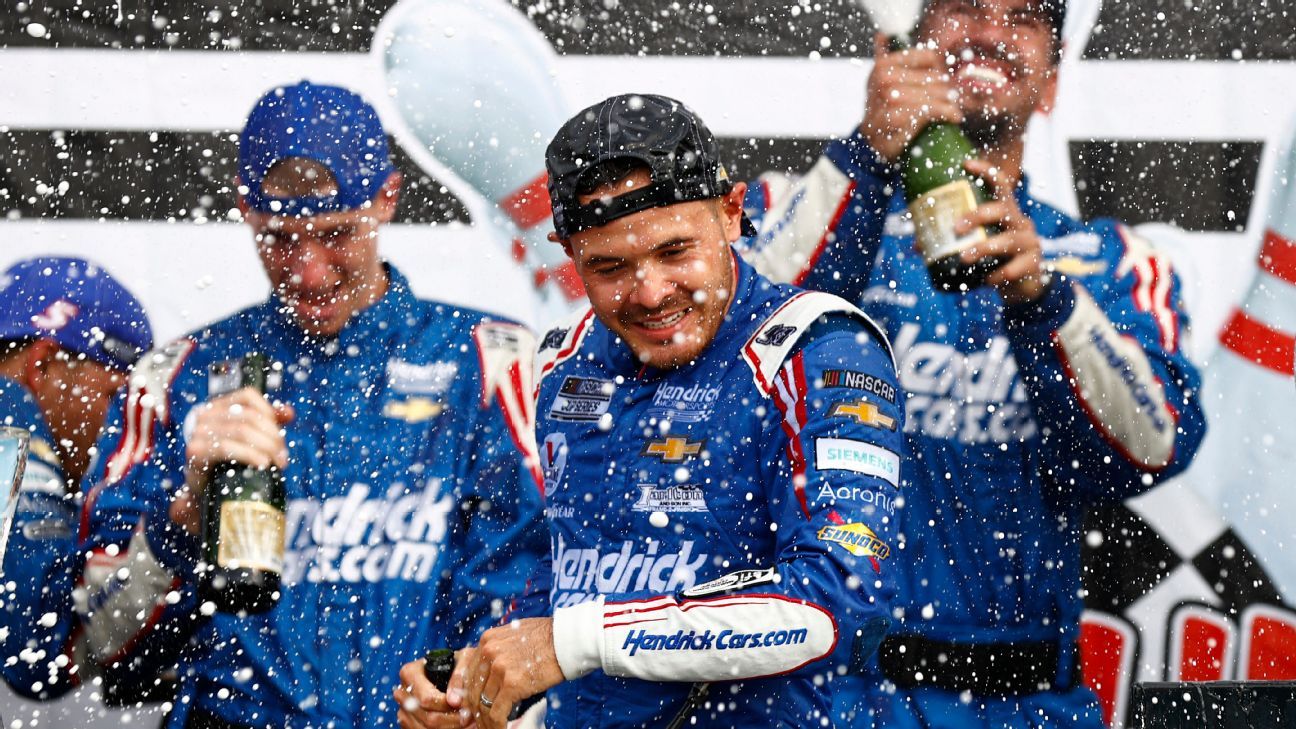 Elliott was seeking his third straight victory at The Glen but was relegated to the back of the field before the race when his No. 9 Chevrolet failed inspection twice. He made a gallant charge in the final segment but couldn’t overcome Larson’s big lead and crossed the finish line 2.45 seconds behind.

Larson also held off Elliott in overtime to win on the road course at Sonoma in June.

“It’s awesome,” Larson said after his series-leading fifth victory of the season. “It really shows just how good the organizaton is.”

It was the first Cup race after a two-week break for the Tokyo Olympics and there was no practice or qualifying.

Larson took the lead from Truex in the pits on lap 67, and the two were back together at the front of the field with 20 laps to go in the 90-lap race around seven-turn, the 2.45-mile layout. Kyle Busch in third was nearly 10 seconds behind and just ahead of Elliott.

Larson had a lead of nearly three seconds on Truex as the laps began to wind down, but Elliott continued to charge. The grandstands were sold out and the cheers for Elliott grew as he continued his surge. He passed Truex for second at the top of the esses with eight laps to go and set his sights on his teammate just over five seconds in front with lapped traffic ahead.

Elliott’s surge fizzled over the final five laps and Larson negotiated a gaggle of four lapped cars, overcoming a mistake in the first turn, and cruised to the finish.

Elliott had flat-spotted his tires in turn 1 and dropped to 36th near the end of the second stage before rallying.

“I just hate it. I made too many mistakes to win,” Elliott said. “It was too late in the race to recover from it.”

Elliott was dealt a blow hours before the start. Instead of starting 11th, he was relegated to the back of the field when his No. 9 Hendrick Motorports Chevrolet failed prerace inspection and crew chief Alan Gustafson was ejected as part of a penalty issued by NASCAR. Christopher Bell‘s No. 20 Joe Gibbs Racing Toyota received the same penalty.

Truex, Bell and Larson were in a three-car breakaway early on the 50-lap final stage. Bell challenged Truex for the lead with Larson on lap 48 but couldn’t make it stick and backed off.

Brad Keselowski, who finished second three straight times at The Glen nearly a decade ago, is still looking for his first road course win and had perhaps his best shot at a breakthrough when he landed the pole for the race. He led the first nine laps ahead of Team Penske teammate Joey Logano before his day began to unravel. He spun out on his own heading to the competition caution at lap 10, flat-spotted all four tires and was forced to pit again because he was struggling with rear grip. Keselowski finished 35th, two laps down.

WGI president Michael Printup said before the race that the grandstands were sold out for the sixth time in seven years. NASCAR did not race at The Glen last year because of the pandemic.

The Cup series heads to the road course at Indianapolis Motor Speedway next Sunday.

Ryder eyes Alvarez after win via injury stoppage
Fish, B. Bryan fined $10K for promoting gambling
‘Teams are looking for a different type of big’: The Cavaliers have two
The Broncos just hit rock bottom: How Russell Wilson has declined, who’s to blame and what’s next
‘Boxing missed me’: Fired-up Fury set for return