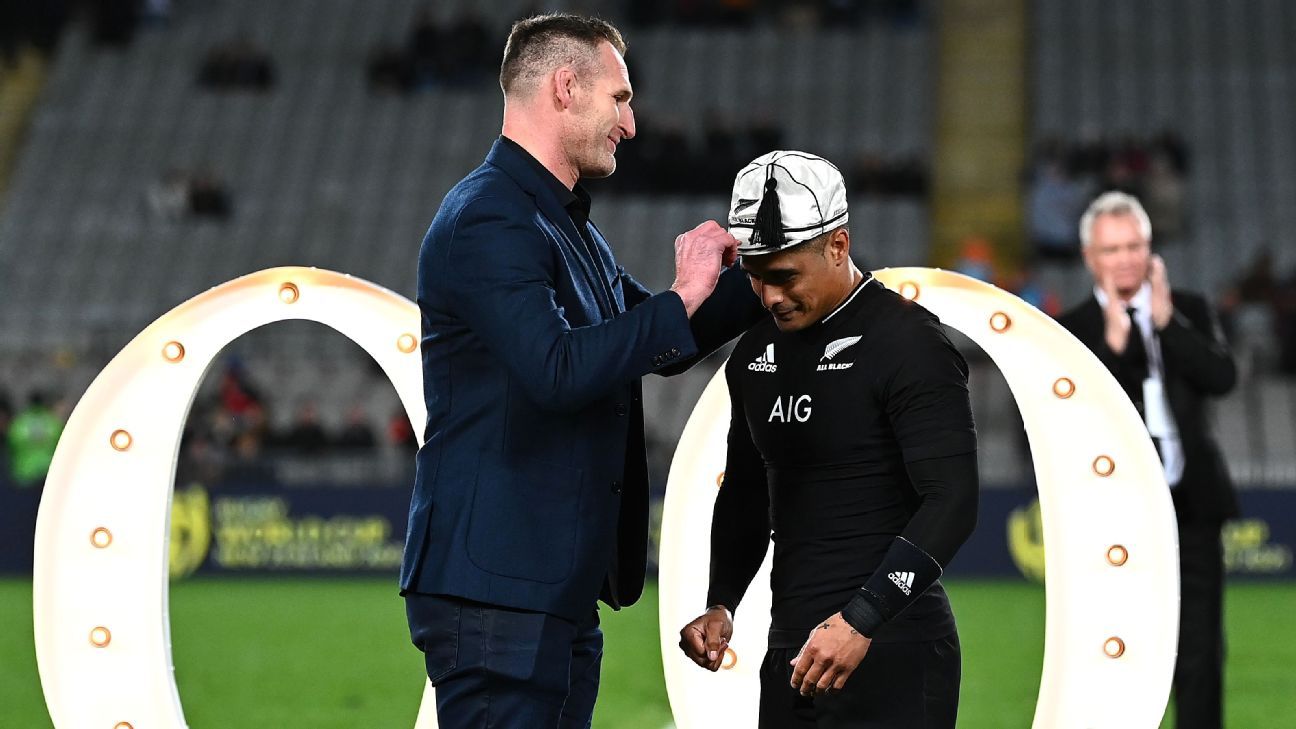 There was Aaron Smith, the World Cup winner and veteran scrum-half, receiving a New Zealand cap to mark his 100th Test appearance in the black jersey.

Later in the dressingroom, Michael Hooper presented Smith with a small gift from the Australian camp, just as Sam Cane had done so when the Wallabies skipper had brought up the ton in Wellington last year.

Relations between the two teams are far less frosty since Michael Cheika’s departure.

But back to Smith.

While the 32-25 victory represents another win in the black jersey, it won’t go down as one of the halfback’s all-time great games. He passed with the accuracy and speed that is largely unmatched across the globe but there were no line breaks or brilliant flick passes back on the inside to a charging Brodie Retallick or Codie Taylor.

The one time he did find a charging Retallick, the pass was correctly ruled forward by the TMO and what would have been the try of the match was scrubbed.

And he didn’t dominate Wallabies scrum-half Tate McDermott either. McDermott was well marked by the All Blacks while he had little luck putting forwards through holes on the fringes, as he had done against France last month.

But the Queenslander was also making just his sixth Test appearance. In fact, the entire Wallabies backline tallied just 45 Tests in total heading into Saturday night’s match, with fullback Tom Banks [15] the only player to have north of 10 international caps.

That’s a mammoth margin to just Smith to start with, let alone the 156 other caps spread across the backline. And that’s before you add skipper Sam Whitelock, Brodie Retallick and Codie Taylor up front, with Sam Cane to return later this year, too.

Smith, Whitelock, Retallick and Cane will all go down as greats of the New Zealand game, with Richie Mo’unga, Beauden Barrett and a few others probably tracking in the same direction.

“He’s been phenomenal, hasn’t he,” Rennie said when asked about Smith, a player who’s early career he oversaw at provincial team Manawatu. “I think the quality of his pass really changed the game that the All Blacks could play.

“He was a great little player for Manawatu and credit to Nugget [Smith], he had opportunities to go elsewhere to big Unions, but him and Aaron Cruden decided to stay in Manawatu. So to go on from there to Super Rugby and play as many Tests as he has is fantastic.”

Smith’s achievement and the list of All Blacks treading the same trajectory perfectly illustrates the ongoing reality for Rennie’s Wallabies overhaul.

Anyone who’s listened to the former Chiefs and Glasgow coach over the past 18 months will have heard him speak of the “good men” in his Wallabies squad; he was at it again ahead of Bledisloe I and so too after the match, in-part defending the suspended Marika Koroibete, Isi Naisarani and Pone Fa’amausili.

He also spoke glowingly of fly-half Noah Lolesio, who had learned just how tough the swirling Eden Park winds were to master.

“We’ve got a lot of faith in the kid, he was excellent against France,” Rennie said of Lolesio. “But he’s going to get better and better, he’s 21, and there’s a lot of young men around him as well.

“He’s growing and an impressive kid, too; very confident, great worth ethic.”

Such is Rennie’s belief in Lolesio, it would be a huge shock to see the Wallabies coach cast his 21-year-old playmaker aside on the back of an off night with the boot, particularly when the rest of his game was largely solid.

Tougher selections decisions might come in the midfield, back three and back-row, but the fight the Wallabies showed inside the final quarter is self-evident of the “good men” Rennie has at his disposal.

Can any of them truly be great, though? Can they mix it with an experienced All Blacks team, on a consistent basis, that now includes a second centurion and a handful of others who could one day reach the same mark?

Reaching the 10-Test milestone should be the first target and, as of Saturday night, Paisami has at least joined Banks in hitting that mark among the Wallabies backs.

And just like Smith did, these Wallabies youngsters have to start somewhere; the All Blacks No. 9 had to navigate a bump or two of his own along the way.

The key for this group of “good” Australian men and their mentor is to start this Saturday’s game with the same vigour and endeavour they finished the first Test with.

And while only Hooper and Slipper can boast the same milestone as Smith – Matt To’omua is otherwise the closest on 58 Test appearances – Rennie’s emerging guard at least now has a first, or in some cases, second or third run, at Eden Park under their belts.

“I wouldn’t say daunting, I’d say exciting. There’s all this talk about Eden Park and how tough it is to win here, but our mindset was that we’re going to get two cracks at it for a start. So you’ve got to embrace that,” the Wallabies coach said

“And we also talked about the fact that what’s happened historically counts for nothing on the day, and maybe the advantage that we’ve got is we’ve got a lot of young men who aren’t battle-scarred by the past; they’re not too concerned about what Eden Park presents and just get out there and play.

“So we’re excited we’re gonna get another crack next week.”

They’ll get another crack at the little bloke known as “Nugget”, too, with his Test career locked in through 2023. Smith has many more games to come yet, though his ascendancy to greatness has long been assured.

He now just has the cap to prove it.

Harden returns for 76ers after 14-game absence
The US accomplished a lot in Qatar, but left everyone wanting more
Mukesh Kumar Grabs Six As India A Dismiss Bangladesh A For 252, Umesh Yadav Warms Up For Tests With Twin Strike
PSG president: Confident ‘happy’ Messi will stay
Sources: MMA coach barred during betting probe