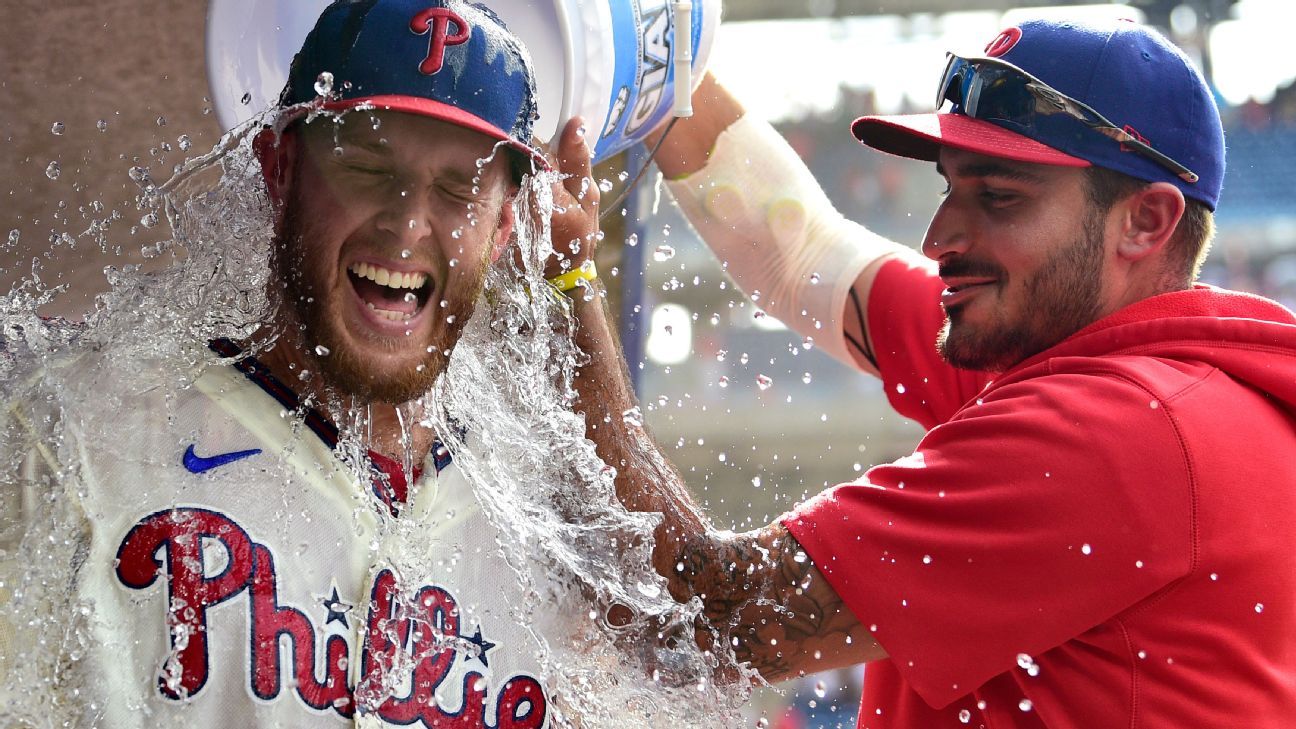 PHILADELPHIA — Zack Wheeler pitched a two-hitter and struck out 11, Bryce Harper homered and the first-place Philadelphia Phillies finished off a three-game sweep for their eighth straight victory, 3-0 over the fading New York Mets on Sunday.

Jean Segura and J.T. Realmuto also homered for the Phillies, who moved 2 1/2 games ahead of the Mets in the NL East. The streak is Philadelphia’s longest since winning eight straight in July 2010.

“It was pure dominance today,” Harper said of Wheeler.

The Mets received a pregame pep talk in the clubhouse from owner Steve Cohen before losing for the seventh time in eight tries. New York arrived at Citizens Bank Park this weekend leading the division and left in third place. Atlanta is in second place, two back of Philadelphia.

Following an emotional ceremony to retire the jersey of Roy Halladay, Wheeler (10-6) pitched like the late Hall of Famer.

“On a day that you honor one of the greatest pitches I’ve witnessed pitch, he goes out and it was like Roy had his hand on it,” Phillies manager Joe Girardi, pausing while choking up a bit, said. “He gives a Roy Halladay appearance today.”

Said Wheeler, “Today was his day and I just tried to pitch like him.”

Wheeler gave up a double to Brandon Nimmo to start the game and then retired 22 consecutive batters — the most by a Phillies pitcher since Halladay’s perfect game on May 29, 2010 — until Michael Conforto walked in the eighth. Nimmo singled with one out in the ninth and Wheeler soon struck out slumping slugger Pete Alonso for his fourth career complete game, three of them shutouts.

Wheeler walked only one. He threw 80 of his 108 pitches for strikes.

“The (fastball) was moving, I had the command of that and my off-speed (stuff) was pretty sharp,” Wheeler said. “When you have all that going, it makes it a little easier.”

The 31-year-old All-Star pitched for the Mets for five seasons before signing a five-year, $118 million free-agent deal with the Phillies prior to the 2020 season. He improved to 3-1 with a 2.72 ERA in seven starts against his former club while reaching double-digit strikeouts for the 14th time overall and sixth this year.

Offense continued to be a struggle for the Mets, and they have 20 total runs in the last nine defeats. Alonso was hitless in four at-bats with a pair strikeouts to stretch his rut to 0 for 21, yet remained positive afterward.

“Two weeks from now, nobody is going to talk about this,” Alonso said. “There are certain times in the process where you know you’re on the right path and you’re not getting results.”

The Mets have been in first place for most of the season, but in this mediocre division, first place hasn’t meant more than a handful of games over the .500 mark. As a result, any losing streak of significance in critical, especially in August.

Taijuan Walker (7-7), a first-time All-Star this year, continued his second-half slump. The right-hander allowed three runs on four hits with a walk and a strikeout. Three of the hits were homers, upping the staggering count to 10 longballs surrendered in the last four contests. Over that stretch, Walker is 0-4 with a 7.84 ERA and has given up 26 hits in 20 2/3 innings.

Harper stayed hot by hitting his fourth homer in six games, a solo drive in the sixth that made it 3-0 and gave the six-time All-Star a total of 20 home runs this season. He has reached base in 17 straight games and was greeted in right field by loud chants of “M-V-P! M-V-P!” by many among the 39,186 in attendance, marking Philadelphia’s largest home crowd of the season.

The Phillies jumped to a 2-0 lead in the first. Segura drove a 2-2, 94-mph fastball into the seats in left, and Realmuto hit an opposite-field drive.

Shortstop Javier Baez, a trade-deadline acquisition from the Chicago Cubs, left after batting in the fifth due to left hip soreness for the Mets. Baez grimaced on a swing during his at-bat that ended with a groundout to second. Manager Luis Rojas said initial pessimism about the injury subsided following a postgame evaluation.